Dunno…I can autoplay almost all rare quests with Kiril, Wilbur, Wu Kong, QoH and Agwe, sometimes I do it…

My alt with Boldie, Grimm, Ameonna, Chao and Scarlett (all not maxed) also had no problems at all this time, there’s still no 5*, but why not collect the mats before 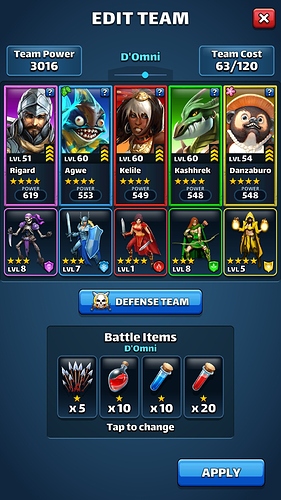 Somehow, I still feel I have a very poor army because their attacks are still poor.

with gunnar+6, belith+7, valen+9,belith +1 and triton+9 was pretty easy. used some minor pots, an axe and just two arrows. i agree with this rare quest being easier than others. cheers and get them!

tried it with Shrikewood, the mobs were no prob on autoplay, but the bosses…cost me 75 gems, lol. Okay, to be a bit mor precise then: I can autoplay all stages until the boss wave of the last stage (memo to myself).

After 3 month of playing I got a team that beats the rare quest Mount Umber. I got Wilbur from the last AR and at 3/60 he is ready for the quest. It was quite easy to beat the bosses in the final stage. I use Wilbur for the last two stages with the ascension mats because the enemy hits quite hard with the slash attack.

Fire that blue diamond and it’s game over for the bosses. Proteus was only used once but he was my assurance just in case. I didn’t need the battle items except for two mana pots.
With this team any rare quest is a breeze. Just replace the heroes for strong color against the bosses.

note: I should have used Agwe instead of Mireweave. Then my team has 3 heroes of the Lagoon Family and has an extra 10% attack. 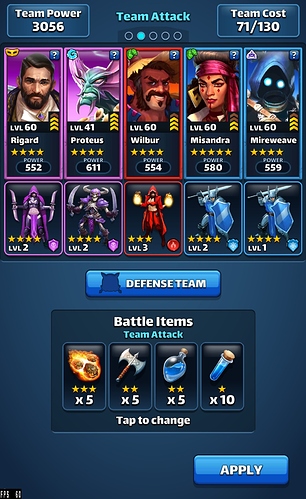 Congrats! That first one feels good, doesn’t it? Nice job constructing a team for the task, btw.

A complete overhaul of my team. Less defense but buttload more firepower. It works even better than my previous team ( two posts above ). Be sure make a blue diamond in the stage before the bosses. Bye bye Proteus and Wilbur. 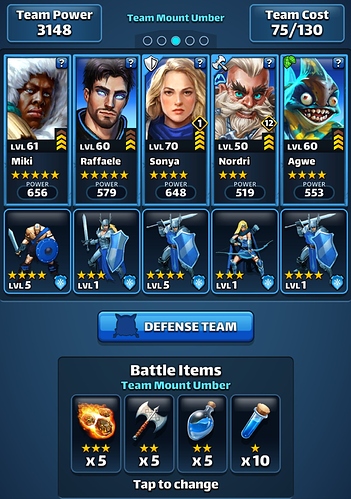 I went 3-2 for Mount Umber. Takes way too long if I do mono, and usually when I do mono on the rare quests when I get to the bosses it gives me 0 of the colour I am in need of.

Simple and of course no items needed