Hi all, am looking some advice on Proteus and talents. Still learning about this game and have enough emblems to level him a few times Should I take the path of attack and defence, or health/defence?

Hi there
Attack and defence path seems to be good to me. GL.

I’m a fan of using the Talent Grid to emphasize existing strengths, and Proteus has a high attack stat, and his DoT scales with his attack stat increasing — so prioritizing attack makes sense to me, and is the route I’m going: 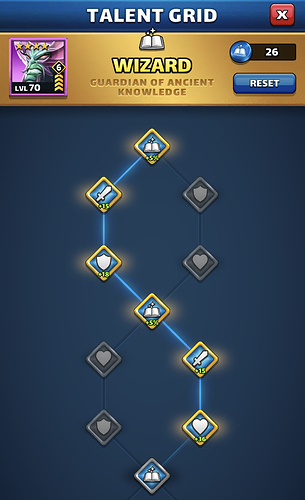 Proteus is one of the few I am going defence/health. Yes his DOT scales, but his true value is the mana stop and I want him alive lol

Thanks for the advice folks, think I might go the attack route.

Either way, he’s becoming my favourite 4* on events and trials.

The way he (figuratively) neuters the likes of Red Hood and Guin is indispensable.

Unless I ever get Hel, he has a place every time.

I went with health and defense as well, the longer he lives, the better. Scrawny little dude needs some pizzas and better clothing

Health and defense for my Proteus as well. His DOT is a nice bonus, but his mana stop is what makes him my favorite character.

I’m taking the health and defense once just to make him a little less of a tile wimp, and then going attack the rest of the way.

I use him on titans to stop mana generation.

Maybe I’ll add in a bit more health then as well, he does seem a little squishy!

For Proteus I chose the defense route, to keep him alive long enough to work his mana stop magic.

Just adding this from a related thread:

Proteus: jinx and scar of the depth

I’m already finding that just the little boost to defense and health along with the attack boosts has made a difference.

I’m going to keep going the attack route, with some bonuses to defense/health baked in along the way on those paths, and keep using a 4* crit troop with him that’s currently at level 12 with a 16% attack, 19% defense, and 6% health boost.

And while I use him for the mana freeze, the DoT does also make a huge difference in winning Raids, especially as the amount slowly creeps up.

Always increase the damage. It’s not much, but drains the enemies slowly to death.

Senseless to make him less squishy, if the enemies won’t die.

Have anyone compared Proteus total DoT to the damage of other heroes who hit three? If the damage is on the same level, it make sense to go the attack route.

On a side note, DoT bypass defense but can be cleansed and need time (fortunately, the enemy can’t use their skill to cleanse/heal or attack under the effect of Proteus’s skill).

Seems it is split between those who choose attack/defense and defense/health… @Kerridoc what do you think? Thanks.

I went offensive like @zephyr1… I think it’s better for several reasons:

I’ve had heroes with <30 decide a raid/battle. My alt Proteus is going def/HP. I bring Proteus to cast his mana stop, not for his attack.

@zephyr1 and I have had some meaningful discussions about path for Proteus. As someone who runs him almost 100% of the time in raids, here are my thoughts:

An emblemed Defense Proteus on offense can actually take a hit from Lianna (with a decent troop and a family member). And as an ensemble player in 4*/5* purple stack, losing a bit off the top of his DOT in exchange for survivability is a reasonable choice.

So there’s a viable case for upping his defense. Moreover, if you run him on defense with Triton or Ariel, flanking a yellow tank, he’s just nasty.

I have DOTed out lots of emblemed 5* heroes with Proteus. And his tile damage is 5* good. 4+20 Attack Proteus has an attack stat that goes to 840 pre-troops. That’s an astonishingly hard tile hit, and troops just make is better.

With a decent mana troop, a full emblemed Attack Proteus’ DOT does over 460 damage. That’s more than 1/3 of the health of the average 5*. And they’re locked for 3 turns, just eating it.

I’d describe Attack Proteus as a high risk/high reward strategy, but highly suitable for a Proteus used in raid stacks. When he fires, it transforms the board. If you’re raiding up, this is almost certainly the way to go.

Defense Proteus is lower risk, lower reward for raid stacks, and a beast on a defense team with a family member. The closer you are to parity with your foes, the more sense Defense Proteus makes.