This thread is for discussing strategy related to Eset, as well as your thoughts on her. 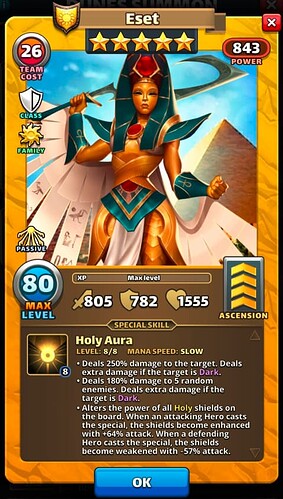 Beta Information: 🧪 Early Information on Round 6 of Season 5 Heroes [Part of The Beta Beat v53]

What do you think of Eset ?

This thread is for thoughts and discussion on Eset.

Based on preferences Forum members have expressed, please try to stick mainly to Eset and not wander off topic too much to other heroes.

*NOTE: Summon Results posted without any commentary/feedback at all should be flagged as Off Topic and removed, based on preferences expressed by the Forum community. Please include some comments about what you think of Eset when posting Summon Results. In addition to opinions about Eset, you are also encouraged to include how many Summons it took before receiving Eset (or how many Summons you’ve done without receiving Eset), so other players are presented with realistic experiences of the rarity of Legendary Event Hero.

Is Eset worth Summoning For?

How many copies of Eset would be useful to keep & Level?

What do you think Eset’s Primary Purpose is?

What do you think of Eset compared to other Heroes?

How does Eset’s Special Skill and Intended Purpose match Eset’s Base Stats?

Is Eset worth giving Paladin Emblems to?

In Defence, where do you think Eset is best used?

How do you think Eset is best used?

What do you think is Eset worth Limit Breaking ?

If you would emblem Eset then which Emblem Path would you select ?

Thx @Elioty33 for the prediction.

Xiaotu will NOT yet be available when this post initially launches.

Some references to Xiaotu in the OP.

Thx, I forgot to update this part to Eset.

Not really sure about her. Congalach deals five hits of 310% damage. This one hit per 250% + five hits per 180%. I doubt extra damage against purple compensates that enough. She alters power of shields but given she’s slow it might be a bit late. Slightly higher stats and better family and passive are probably bringing her on par with him. Good for titans too.

How does it work if you have multiple shield enhancers? For example, I have Rhys, who alters holy shields to give more mana. I assume Eset would overwrite that so they give more attack instead. Would be pretty sweet if they stacked, though.

She alters power of shields but given she’s slow it might be a bit late.

Agree. By the time you get her charged, you’ve probably used them all anyway.

They don’t stack. Jott and Alexandrine’s buff don’t, so I assume Rhys + Eset won’t as well. I have Rhys too and I think she’s more useful for titans given that she enhances mana gain of tiles and boosts regular attack as well.

Looks more like a titan hero to me otherwise meh…

Did my 35 saved S5 tokens and got nothing…I suppose I will wait for Tetisheri to be featured again…I really like Eset artwork!
Edit: also finally experienced the special live in game…very nice indeed.

Sorry to hear, I also got nothing in 40 summons as I was hoping for either the new lady or Ahmose

Can you compare her to Alfrike ? Except for the brainless attack and with shields?

Used my saved dunes coins for nine pulls, got Elena on pull 4 cursed and then carried on hoping for the HOTM.

But pull six got me

Having completed all other seasons she is only the second season specific hero I’ve gotten after Lord Loki.

Looking forward to crushing some purple titans and heroes.

I used my pulls here because I would have liked to have gotten Eset or Ahmose, but it was not meant to be in amidst my 19 coin pulls.

Only thing for me, is that she is a titan hero, and I don’t have Rhys either so no concerns for overwriting. I have to admit though, I do think Rhys is more useful overall as a tile buffer, and her damage to me seems… low relatively speaking (read: I still would have liked her!). My mind would go to a hero like Jove for instance (who, I know is far less accessible [for now]) but he does 530% to one and minor (265%) to all others, at fast speed!

My current holy hitters (levelled and unlevelled) consist of cWhtie Rabbit, Ogima, Caitlin and cPoseidon as the notable ones. (then add Kara and Lidenbrock as non hitters); so as nice as it would have been to have a powerhouse, I will wait for Challenge Festival and hope that I stand a chance to obtain Gazelle or Anne once again!

When first reading her special, the damage, tile buff I thought “nice, a fast mana Titan specialist, would be nice savings on mana pots”, went back and looked at mana speed.

Almost fell down (while seated).

So, she really is a Titan beast and rush marvel and obviously harder to play in “standard” PvP arenas.

In spite of the mana speed handicap, I would be delighted with her for the tile buff.
Jott made a huge difference on red titans and to my great sadness remains my only tile attack buffer.

[Edit: Not true, I took Rat in Fated Summons]

Why is this hero so bad. Should be average speed.

in my opinion she needs to do more damage on the random hits at least. 200% minimum

currently she is a worse version of congalach in most situations