Hadn’t seen that one before, thanks! It’s missing some newer portals but it’s still very good!

For me it does not matter if they remove the season 1 heroes from the portal or if they put strong heroes in there! I do not have enough money to pay such new prices for summons. It is too expensive for me. I have to decide if I want to summon less in the future or if will be a F2P.

If my heroes are getting weaker and weaker because of new stronger heroes with better attack and defense stats, I probably loose more often and than I will quit the game because it makes no fun anymore.

Is a monster chart available

There is no quest this time around anyway as per the Version 50 Release Notes so no hurry to get the quest’s chart. But you can certainly have a look at the

Early Information on New Covenant of Champions Event [Part of The Beta Beat v50], that’s the latest information we have on this matter. 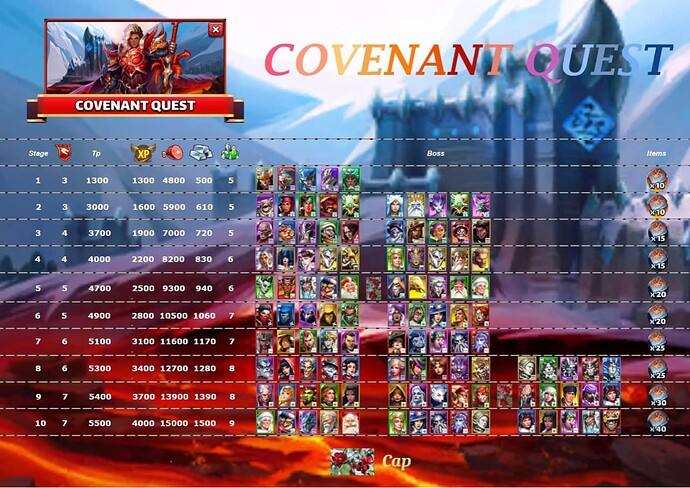 and what is this hero in the upper left corner of the picture? Do you know his name and something else? As far as I know, there was no such hero on beta

Ebba looks different. I haven’t seen that one too. Maybe she will be added later, like this Soul Exchange guy.

I saw picture Ebba and other heroes that @PlayForFun talked about. She looked very different. Unless, of course, the art has been replaced. But, I think, they hardly replaced it. This is some other hero. ))

I got my in game message saying the event has started. I see the portal, but not the actual event. What gives?

The event will only arrive in late September / early October.

THe message said it has started, weird.

Probably because event consist of portal + quest. So event has started, we can see that new portal and heroes, but without a quest.

@Gwniver You made that post asking what would get you to stop spending in game. I wanted to post a response but I didn’t have an answer. The gem increase isn’t enough for me to change my spending habits. Imho the top 10% account for 90% of the revenue which is why they’re being catered to. So trying to mobilize people to not spend isn’t really going to effect anything in my opinion.

One main reason I won’t stop spending is that I love this game and it gives me purpose. I’m a stay at home dad, I can’t take classes at IU because I gotta watch my daughter. So this is like a college course for me. It challenges me and is suuuuper fun. Haven’t enjoyed a game this much since call of duty 4.

I get the frustration, I’m not blind to the fact that this gem cost is there to push certain people off the portal. It’s there to make whales stronger so they can eat the minnows. This game is mathematically calculated to hurt some and help others. It’s not really a game when it’s being manipulated constantly, it’s an exercise in who can spend the most.

I say just don’t spend there. If I don’t like a portal, I don’t pull. Or I pull just for the ascension chests and stop. A lot of people are really upset about things I don’t get. Mythic titan people want it just gone. WO3K people hate the loot. It’s all “free” loot. If you don’t like the event don’t participate. Why get rid of it? I feel the same about the portal.

At the end of the day I am sorry this is upsetting you all. CEOs have a fiduciary responsibility to increase profits every year. That’s the biggest issue imho. Our financial systems are such that it almost incentivizes “shady” behavior. So sadly this is only going to get worse. This may be a time to reevaluate your relationship with the game. I don’t mean you specifically @Gwniver just anyone worried about the direction of the game. Soon you’ll have to buy all the offers just to use your base.

Very well said. Nobody is forcing you to buy these offers. Whales do because that’s how they like to allocate their money. Different people have different priorities when it comes to their life. I never understood why people complain so much about spending in this game. Nobody is forcing you to. Also never understood why people complain about summoning odds and the boards. The odds are statistically against you to pulling 5 stars. Also just because you pull in a portal 100 times, it doesn’t guarantee you will get at least one 5-star hero. That’s not how statistics work. The sampling size is too small.

You´re right - as long as there are whales, the minnows will not be cared for. It´s how the mobile industry has developed into these “F2P but really P2Gamble” games;

As long as there are people willing to pay, things will never change. So they remain the same. It´s time to ‘pick our battles’, as they say, instead of wasting more energy on trying to make the world a better place through this particular platform.

I just wish a fraction of the money spent in these portals would be given to charity by the developers instead. They could so easily donate a small portion. It makes me sad to witness these days, the world situation taken into consideration - just the cost of a single summon could put food on the table to someone who goes to bed hungry every day

Yes, I know that one can argue that is the case for so much, but now we´re talking about this particular game

Either way - I´m glad you´re having a blast with it, and your daughter is lucky to have a stay at home dad

- before you know it, they are all grown up (I´ve been told!), so it´s nice you´re able to spend these early years with her.

Thank you for the advice - a revaluation is in order, you´re absolutely right - I´ll take some time out, because it might just be time for this little minnow to swim away, before it gets devoured

Howdy! Another stay at home dad here. This game is nice mini break here and there. It also gives me a chance to BS with actual humans.

I’m F2P, though. For me, I play with what I have and my own meta game is being as efficient as possible and learning how to use who I have to the best of their ability.

I’m not saying either approach is right, wrong or better than the other, though.

they might. I haven’t looked at their books, but charity is usually a good place for companies to at least get their names out. If you are super interested, every corporation has an investors section that shows their P&Ls (assuming its a traded company).