This thread is for discussing strategy related to Costumed Skadi, as well as your thoughts on him. 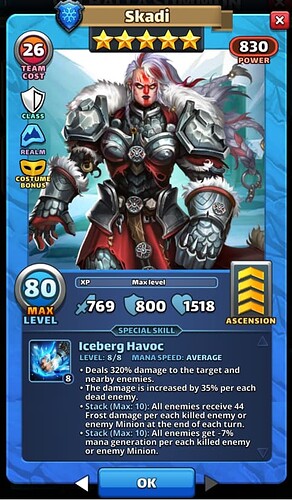 There appear to be no changes to Costumed Skadi from last-seen Beta stats, skill, and design.

Beta Information: 🧪 Early Information on Round 1 of Season 3 Hero Costumes [Part of The Beta Beat v49]

What do you think of Costumed Skadi ?

This thread is for thoughts and discussion on Costumed Skadi.

Based on preferences Forum members have expressed, please try to stick mainly to Costumed Skadi and not wander off topic too much to other heroes.

2 Likes
HeroPlan.io - Tool for tracking your profile's progress, sharing it & to Plan your Hero Use for Class Trials, Challenge Events, Wars, Tavern of Legends Titans AND MORE!
PlayForFun July 3, 2022, 4:34pm #2

Is Costumed Skadi worth Summoning For?

How many copies of Costumed Skadi would be useful to keep & Level?

What do you think Costumed Skadi’s Primary Purpose is?

What do you think of Costumed Skadi compared to other Heroes?

What do you think which version of Skadi is better ?

Is Costumed Skadi worth giving Monk Emblems to the original hero?

In Defence, where do you think Costumed Skadi is best used?

How do you think Costumed Skadi is best used?

What do you think is Costumed Skadi worth Limit Breaking ?

If you would emblem Costumed Skadi then which Emblem Path would you select ?

Attack on 3 is terrible for her. Maybe versus a diochan, but there will be so many bera and freya minions just out there hanging out on the wings. I’ll take the costume bonus… But hard pass on using costumed skadi over original sladi.

I think the hit 3 is much better due to higher damage (both attack stat and attack damage). The stack still says all enemies, so the hit 3 has a higher chance at applying stacks as the normal version damage is too low for some minions.

But… When you kill the tank… Suddenly it is an attack two… So half as effective.

I love skadis hit all if i ever get her costume dependant on what team im versing id be inclined to just use costume bonus over hit 3.

Ditto. If it is an event… And there are only 3 defenders… Yeah… But when it comes to clearing minions… Regular.

That would be a much more fun version I think

Definately i mean most costumes just alter the skill a little this one changes it a bit more. Other than some that increase the number of targets at reduced damage but adds more ailments.

696 vs 770 attack stat is a significant difference as well. Too bad the original version did not have this kind of damage, and with the improved stack benefits, I don’t see how the original is better

Most raids i can get a 5 stack 1 hit from skadi a few exceptions with some of the tougher minions.

But… If you have Krampus, or use either kiril versions, you can get 5 dead minions and 5 sets of stacks.

I think Hulda and noor’s are still too strong without chopping them down a bit.

Skadi, both versions, can acheive max stacks early on if you pair her with Guan Yu

With full attack and LB, she now hits like a truck. She’s more suitable for def team IMO.

Attack, then def… Then maple syrup.

Awwwg… i ran out of maple syrup…