This thread is for discussing strategy related to Costumed Melia, as well as your thoughts on him. 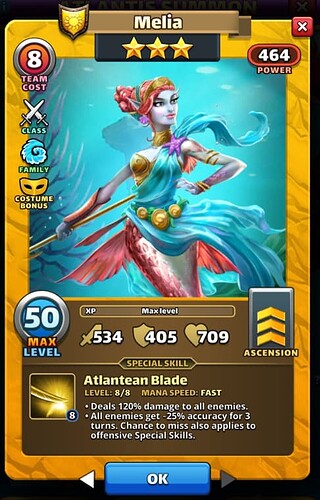 There appear to be no changes to Costumed Melia from last-seen Beta stats, skill, and design.

What do you think of Costumed Melia ?

This thread is for thoughts and discussion on Costumed Melia.

Based on preferences Forum members have expressed, please try to stick mainly to Costumed Melia and not wander off topic too much to other heroes.

4 Likes
HeroPlan.io - Tool for tracking your profile's progress, sharing it & to Plan your Hero Use for Class Trials, Challenge Events, Wars, Tavern of Legends Titans AND MORE!
PlayForFun April 30, 2022, 4:49pm #2

Is Costumed Melia worth Summoning For?

What do you think of Costumed Melia compared to other 3* Heroes?

How many copies of Costumed Melia is it worth keeping & levelling?

What do you think Costumed Melia’s Primary Purpose is?

What do you think which version of Melia is better ?

Is Costumed Melia worth giving Druid Emblems to the original hero?

Where do you think Costumed Melia is best suited on defence (in a 3* arena)?

How do you think Costumed Melia will be best used?

What do you think is Costumed Melia worth Limit Breaking ?

If you would emblem Costumed Melia then which Emblem Path would you select ?

I’ve decided as the chances of getting a 5* are almost impossible I’ll be happy with what I do get.

Used my gems and was actually quite pleased. 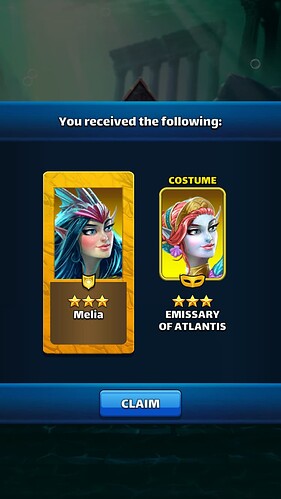 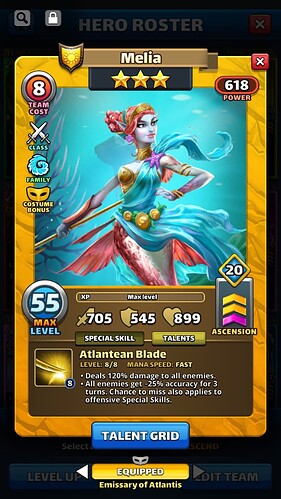 Which version would be better of her? Costume or non costume?

I prefer costume as I like fighter more than Druid.

Second this, costume if placed on defense and no-costume for offense

I disagree, the distinction is not as much between offense and defense as it is between tourney types. Regular version is best in buff booster, while the costume is best in bloody battle. At least that´s how I use them and I use the same version on offense/defense.

Have costume and base maxed +20, get the family bonus when running both. Add in Mneusses in same deal and you have 4x for family bonus.
Works in the right tournaments

Are you sure you get the family bonus for a costume and regular version? I would have assumed them to be considered the same hero, but I don´t know either way, just wondering.

Can confirm you do get costume bonus if you use an original with a costumed version, they are considered different heroes in a battle