Aegir... Worth it or nah...? (Pulled from Tavern of Legends)

From the Tavern of Legends Portal, I summoned… 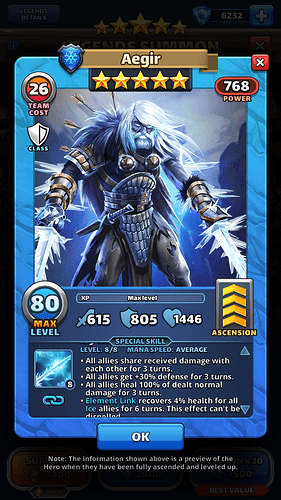 Is he really as bad as they say? Why or why not?

Aegir is absolutely fantastic! The negative opinions you may be seeing of him are all probably from a long time ago before he got buffed. Currently, he is an absolutely wonderful hero to have!

Or he confused Aegir and Aeron. The latter really sucks.

Yes, I’ve perused the threads about Aegir now that I’ve pulled him from ToL Portal and, you’re right, they’re all old from before his buff. Does anyone know about a thread about Aegir since his buff. Id like to learn more. Maybe I’ll start one. shrug

I know this is off topic, but I’ve looked everywhere, I think, and can’t find how to start a new thread. Will you help, please?

Whaat ! In my opinion he doesnt suck by no means.
The problem is that he was powercreeped by C.Rigard . This means that you wont need to spend tabards to access to an excelent purple healer.

I have him and i havent maxed yet because im not drawing in tabards(who is ? lol) but i consider him an excelent hero to bring on offensive .

I’ve had him at 3 / 70 for ages, because scopes are the thing I see the least. But even at that he is sturdy and useful. On big red titans he can keep the team alive very well, for example. And there is a trial where he is the only healing option, and he is respectable there too

If only I could get telescopes he would be in the frame for final ascension. 2nd Frida, Richard, Isarnia, Raffaele and Thorne are the other contenders

He is great. Make him as tank on war and ur opppnent will avoid u. He is one of monster tank that so hard to beat

To be honest he is a hero I hunt at tank, but my green fast team is very good, I think he has other strengths that are better and underrated

In wars where the opposing team is using blue tanks, I use my mono red team with Wilbur, Boldtusk, Kong, Anzogh and usually a third AoE to decimate any Aegir tank, which there are usually at least a couple of. In raids Aegir tanks are an auto-attack.

On titans and offense he’s fantastic.

Fwiw I never have any trouble with Aegir tanks, too many fast green attackers/dispellers/mana controllers to counter Aegir. And I’m using only 4* heroes too since my only maxed 5* green is none other than Telluria!

@amrath Aegir is a good on offense and great for titans, just please don’t try to use him as tank.

I’d say nah, but it depends on the rest of your heroes.

As a tank he’s still rather weak. While he does protect your team better after his buff, he’s still not punishing, so the attacker can just unload tiles on him and dispel if necessary.
On offense he’s not quite strong enough to be the sole healer. He can help keep your team alive, but I’d rather have another damage dealer and end fights quickly.

I currently only use him for trials and Tavern of legends. In all other modes I prefer my 4* over him.

Well maybe because i’m always having hard times facing aegir in war with arrow aids and if majority opponents using aegir as blue tank i’m baked with 4th flags above as i already run out all dispellers.

Just my personal opinions, aegir is still as great blue tank tho

In wars where the opposing team is using blue tanks, I use my mono red team with Wilbur, Boldtusk, Kong, Anzogh and usually a third AoE to decimate any Aegir tank,

You take red against blue!?! And it works!?!

I used him on offense when I was lacking a blue healer. I don’t regret maxing him, but I’m starting to use cKiril more… mainly bc I have two other average speed blues that fight over my lvl23 mana troops.

He takes some getting use to… making sure the board has ample tiles that are needed for the heal to be effective. And there has been a time or two when the shared damage hurt more than helped…

Again… I’m glad I maxed him based on the options I had at the time. Ariel would be better. But he’ll do.

It works because the specific combination he mentioned is a pretty devastating combo.

In general, stacking red against blue probably shouldn’t be the first choice.

Same, if I can only pick one, I bring Kiril for the consistency. However, Aegir’s definitely not bad.

If timed well, that defense boost and shared damage can save heroes from deadly hits (he saved my Isarnia from being sniped once, and she hit the next turn to win me the raid). More than the healing-from-tile-damage, it’s the shared damage + defense boost that I value.