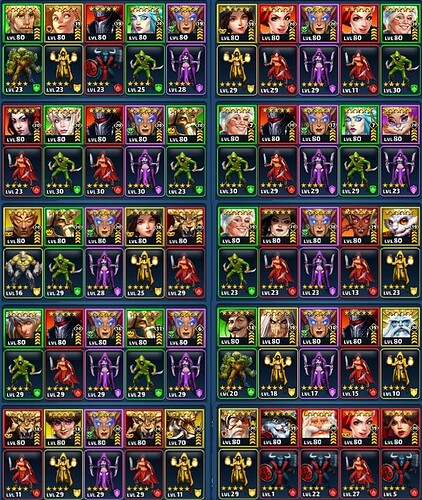 My Senan + 20 is looking forward this. Just not sure for now whether he’ll be tanking or will be put into right corner (left one will be taken by C-Alberich). Though given no ice

will be better as a tank, I expect not many people having Esme and/or Gargoyles. So probably:

Aodhan has better synergy with Senan but that’s too many fiends. Too bad I still don’t have Zenobia maxed …

Can’t wait to fight limit broken Alfrikes without being able to use my Miki. This one will be a bellow 25% for me. 1 to 5% are pay to win exclusive in this case. 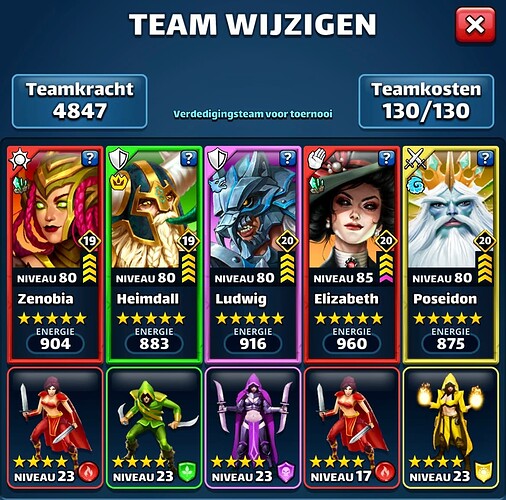 Looks good to me. Hope I won’t meet your defense. No Miki so it will be hard to deal with Alfrike, Ludwig or Senan. 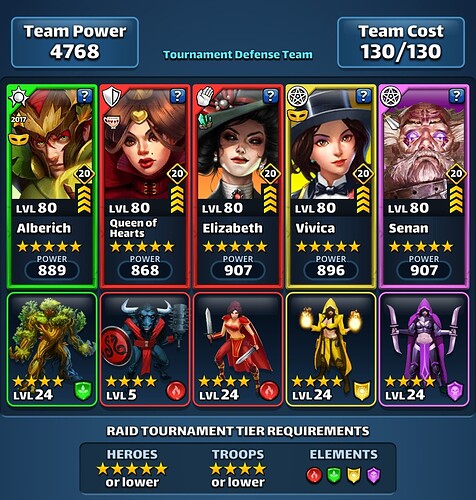 Any ideas would be appreciated, as I am not still sure whether Senan would be better as tank or wing, with Queen’s help he should have time to get some stacks… Eliz has elemental advantage and those minions are pretty annoying as well. Will be interesting to see how many people have Esme or Gargyles.

I decided on this 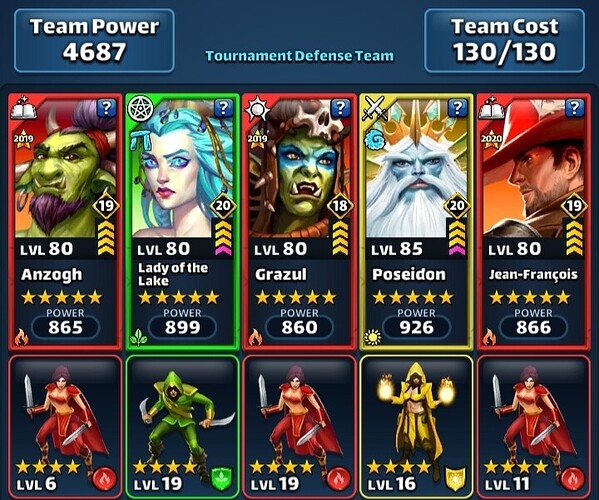 Think it looks OK, but as usual if anyone sees something that’s looks dumb give me a shout

I think Senan is good on the wing in this tournament, so I think and hope the right guess.
Thanks for your feedback, still have some doubts to swap Liz and Ludwig

Running this for giggles. Wish I had more emblems for Inari, but 2019 family bonus should help.

Good luck and have fun!

Could also put elena in tank? 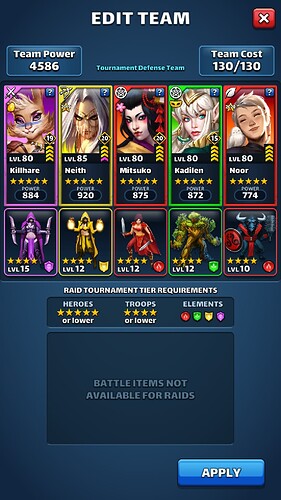 I will try this…

C.Kadilen is a s.o.b. and also summons…

Thanks. I think your defense is great as it is. Ludwig should be the tank I think, especially since he’ll charge mana of Eliz and Heimdall and that means no healing for your enemies and ton of HP for your team. Poseidon and Zenobia should be enough to finish them off then. 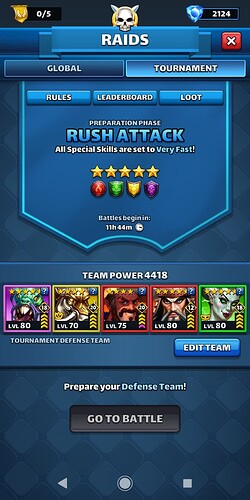 Thinking these two but unsure

Day 1 went about as expected. Faced 2 Alfrike tanks so far. Attacked with Devana - Ferant - cLeonidas - Vivica - Cristobal. Won the first after a long battle with Mother North reviving multiple times. The second one was an ugly zero where none of my heroes fired

Against non-Alfrike teams, tested Ferant and he’s doing fine so far against the damage heavy defenses. Used a rather passive Grazul - Ferant - Khagan - cVivica - Cristobal lineup. 6 red tiles and Ferant is ready to throw back anything

He’s not doing as well in defense though. 0-2 so far 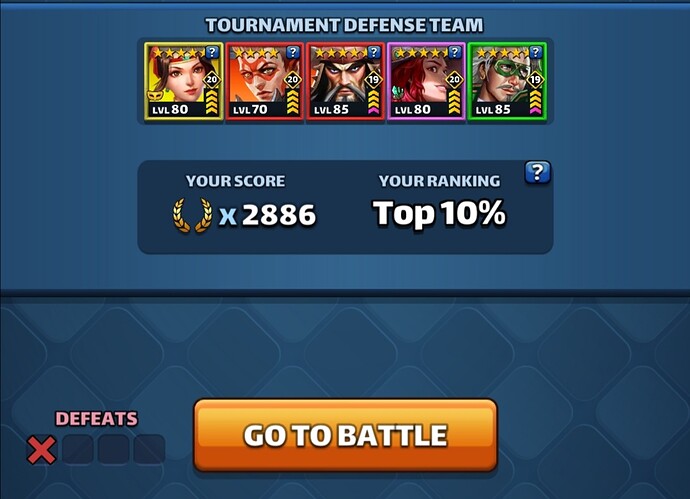 Good luck everyone! May you get the 6 tiles you need

I went 4 and one. The loss was to a LB Noor tank. By time I got the board worked round I was facing 3 minions on each and getting pecked to death. Oh to have a grimble. In hindsight I probably should have switched in Uraeus, but the Gazelle, Jackal, Poseidon combo had been so successful the rest of the hits

Day 1: 5-0. No alfrikes yet, but still using my mono-yellow, as they are the only set I can charge all in 6 tiles besides blue. Had 1 very annoying alberich in the left wing, who kept healing himself and kept reviving. Finally got a yellow match under alberich; fired my specials and then it was over.

4-1 on day one - alternating with Mono Red (best damage) or Mono Yellow (Mana Control) - only loss was when the board simply wouldn’t turn, and 3 heroes were down before could put any tiles together, much less fire a skill…

D is 0-4… went with Mono Red (BT, Gormek, LB Aodhan, Khagan, C-Marj)… guessing my opponents are using strong Red/Yellow/Purple stacks, and getting boards that either work for them, or turn before my D can do anything…

haven’t yet done my hits, but i’ve started off 2-1 on defense with mostly 4* heroes:

i thought i’d get obliterated right from the get go, but so far, no!

First of all - I‘m all okay with people using their Alfrikes in Rush Tournaments/wars. I would do the same.

But what is the point of allowing multiple Alfrikes in tournament defs? I just don‘t get it. You can‘t win against these defs without having multiple Alfrikes on your own. And if that is the case you’ll need a good board, too. There is no tactic, no plan of action needed. Just bring as much Alfrikes as possible. That‘s lame. I actually quite like the idea of rush wars/tournaments. But with all the Alfrikes out there, it‘s no fun for me. Sadly.