agree and think i will akip it in future, it should be speed uo and not rush, should be that all heroes is speed up for one speed, from avg to fast, slow to average and ect

Everything outside map stages and titans are pay to win. Hard to deal but it’s the truth.

Quick 3 yellow tile up the middle KO’d Ludwig. Made a couple of off color matches. Then had a 3 tile match, with 2 hitting Alfrike. That took a chunk of her HP, but she was able to fire

who cleansed the team…after the mindless thing took effect. Slowly killed the purple heroes with timely yellow matches. And ended up winning and not losing a single hero in that battle.
Not sure what would have happened if the professor got hit by Alfrike early on.

Out of 5 matches I faced 3 Alfrike-teams and two of them with a double-Alfrike. I won one of the matches against the “Doublefrikes” with pure luck. I lost the other two matches without a single chance. 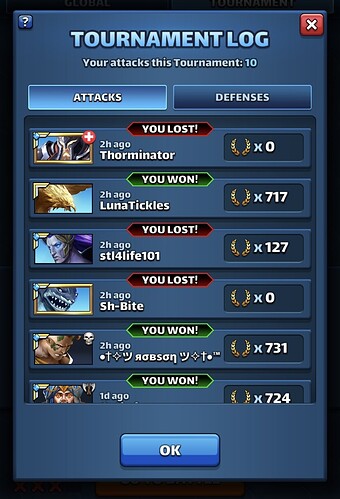 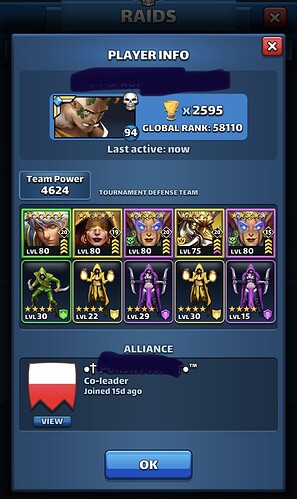 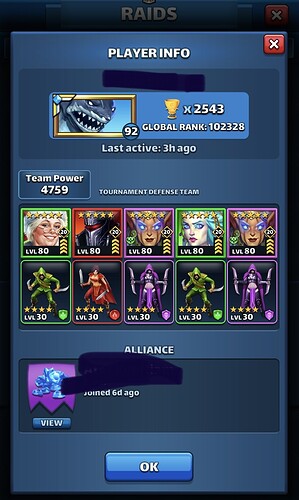 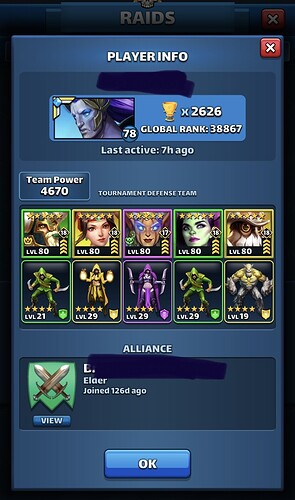 Started brightly with 3 wins including one against a Ludwig - Alfrike team. But dropped the last 2. One was against gregschen’s team, which was also Ludwig - Alfrike. Went with a 4 Holy team (Mist - Ferant - cLeo - cViv - Devana). Board was ok and managed to kill Ludwig (despite his taunt) and Alfrike but MN on the left wing revived both. Killed them again, but Quenell on the right wing had charged up by then.

With an E defense, looks like will be out on Day 3

And once I went mono dark:

Boards provided 2 matches quickly enough to turn the battle in my favour. No Alfrikes yet (guess because I haven’t emblembed to +20 (max +10) or broken my 5*, I don’t match the top defenses yet.

A very hard fought 5 and 0 today leaving me at 13-2 so barring a disaster will be fighting last day.

The alfrike and double resurrectors came quick and often today

Somehow managed to last until the 5th fight of the day before taking the 4th loss. Ludwig + Heimdall + Alfrike was just too much

Earliest exit from a tournament in a while. Good luck to those still continuing on!

Well, after a promising start, I faced harder defenses and the boards weren’t as good. 2-3, with 2 times 0 (just didn’t kill alfrike tank; get wrecked; tile her out anyway and then she gets rivived …).

Other 0 I didn’t even get to charge… 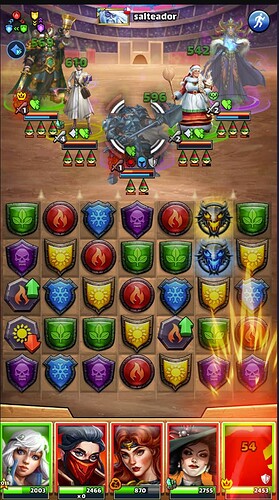 I have never had such an un-fun game in my life, playing ANY game.

Any team designed to run out the clock is a broken team. All the OP heroes introduced this past year has clearly shown me that 5* tournies are a broken mess now.

Another 4 and one day. Some more alfrikes, and a Ludwig to face today.

The loss was an Xman tank, LotL flank. Eventually got through the two of them but I’d taken enough damage at that stage that I couldn’t bring it back.

After yesterday’s debacle, today went better with 4-1. Lost the last attack; very few yellows and by the time I made my second match; flank alfrike was charged and screwed my game. You just a hero is broken beyond reasonability when every top defense uses one, no matter what’s the strong colour… Normal alfrike is hard, but doable, but I guess they just forgot about VF tournaments and wars when designing her…

Hopefully my defense can stay at A 2 more days and get me a top5 finish.

Today, I make this vow:

I will never again pay to Continue in a tournament.

I haven’t done so in the past 6 months anyway, but today convinced me 100% that I will never spend one single gem on a Tournament Continue ever again, for the rest of the time that I play this game.

But today, with three strikes against me, my first tournament board was such absolute, utter garbage… I’m done. I will happily play the tournament through to as far as I can get, but the slight chance I previously had of spending gems to Continue… that is gone as of now.

Day 5 with only having one more loss till out is something I enjoy. Its very much how many fights can I get.

Got through these 2 monsters

In both cases Ludwig extra mana was close to giving me heart failure.

Lost the 3rd one to this.

The fiends were an issue from the beginning. Finally got Gazelle mana up and ready to go, but she got hit by an alfrike cube which killed my chances.

After attks sitting 1% won’t stay there as defence has been a solid E the entire way, but 5% is always my realistic aim anyway.

A fun tournament. Good luck to those still going and see you all in next week’s version

Well that was fun

I made a single move (made the red diamond) resulting cascade sets of Alfrike (unintentionally). Alfrike does a 4% 1 hit on everyone shot.

I still won that though

Defense is at a C (4-5) and sitting at top 25%. Hopefully that holds up to the end and I get lucky with the loot draws

Happy to get ranger emblems, I’m most short on those. Can take Devana to node 8 (mana, an expensive one) 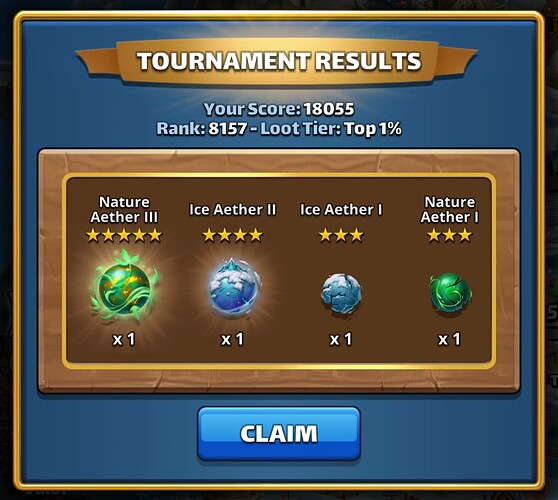 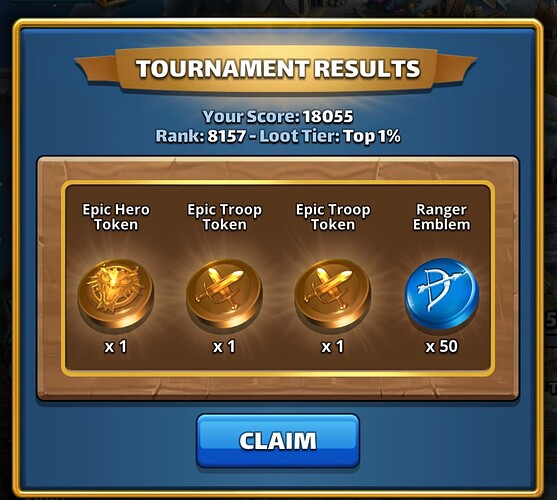