Which red to level up?

Hi, finally got 6 rings together and need to decide between
Tyr
Mitsuko
Marjana
Baldur

Other reds which I have maxed: GM, Azlar, Garnet, QoH, PiB, Black knight

So really missing a sniper/hitter, which would lean towards Marjana. But Tyr or Mitsuko are more useful IMO.

What do you think? Thanks!

Either tyr or mit. I hate how that fool comes back to life.

Tyr - a decent sniper. Not as damaging as other ideal snipers, but he excels on reviving, capable of being a one-man army. Go check some videos on him. My first choice among the 4. I don’t have him though (instead, I got Fenrir, who I left st 3/70).

Mitsuko - suffering from indirect nerf when some blues pierce through her reflect, this geisha is still a decent hero to have. Love seeing most blue heroes kill themselves because of her Mirror of Flames. I have her at +20 all attack path. My second/third choice among your selection of red legendaries.

Marjana - since 2018, I was wishing for her to drop on my lap. She finally graced in my roster via Hero Academy last year that I immediately maxed her and emblem her lightly. She is on the corner of my roster, gaining dust and awaiting for her costume. She is my only red sniper but doesn’t see action as I prefer my hit 3 or hit all reds. Without costume, she is my least priority.

Baldur - I dismissed him at first. I thought his skill doesn’t impress me much, with only his insane attack stat his redeeming factor. But with the right team on defense, he is a beast. Tied with Mitsuko on 2nd/3rd place. I don’t have him though.

I think this is a very important question:

Which one of the four can have emblems?

I assume you can give 20 to any of the four.

1, Tyr: “one man army” as @Ultra pointed out. Not a true sniper but a “brawler” if you will. Very powerful in some circumstances but not my playstyle (I ascended Noor instead). YMMV

2, Mitsuko: she makes the emblem-question very important! At +20 she is very sturdy with decent damage both tiles and special skill. But the most important thing is her versatility. You can bring her against green AND blue. And she has double mana-controll ability! First her direct mana cut than the sorcerer talent. She is still an excellent and non-interchangeable hero imho!

3, Marjana: Untill Gefjon she was “THE” red sniper! Decent survability due to being a Rogue (again: do you have emblems for her?) , good damage and the burn can help against those 900 def 1500 HP monster heroes. Her speed fits spot on with the core red attacker heroes (Boldie, Falcon, etc…).

4, Baldur: a PvE powerhouse. I do not have this hero but my missis loves him! She uses Baldur on hard modes and in her red mono…

I would suggest Mitsuko becouse she is unique but you can’t go wrong with any of these four!

Thank you all!! In the end I went for Tyr because he’s more versatile and has a higher tile damage. Currently Magni and Fenrir got all my fighter emblems and I could give 7 to Marjana, but she’ll have to wait a little bit longer now.

Thanks again, much appreciated 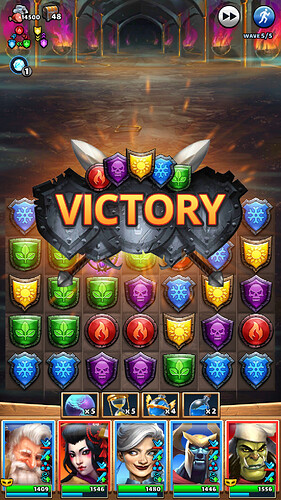 That blue reflect is a SOB ability :love: