Which heroes lower than 5* would you emblem?

While i do have several 5*, I’m mostly f2p so i don’t get my hands on most hot shot heroes, unless i’m lucky. The only 5* that i feel good embleming up is Kunchen, the rest are getting them because they had to be on my defense team…

I’m currently working on maxing the emblems on Proteus and Danzaburo.
Both do great in raid and war attacks and have convinced me that they deserve the emblems.

Melia is another interesting choice…i’ve seen her used in many titan attacks. but i don’t think she’'ll make it against the 11-14* i’m dealing with.

I’d also consider embleming up Hansel, Gretel and the guardians if i ever get them.

What’s your opinion on giving emblems to heroes that aren’t 5*? And are there any lower heroes you are spending/would spend them on?

My opinion? Well my opinion isn’t worth much. I’m no 5* diamond tier hero.

I actually emblem all of my 4* heroes, with the exception of duplicates. And if I have more than one hero of the same class, the majority of emblems go to the hero I’m likely to use more (but I still throw a few emblems on the others so that they don’t feel so naked).

I do not emblem any 3* or below. That’s just personal preference. Embleming 3* can actually be helpful for raid tournaments and rare quests, but my primary focus is epic and above.

Certainly, since you’ll be able to make epics legendarish with talents and by increasing their stats.

Spread to those, which you use the most and which are helpful to advance in the whole game.

Rares aren’t sturdy enough against titans, they could be used for the last warflags, events and tournaments.

Focus on epics and your def, on titans and other sources for ascension mats. Mana control to finish above your strength is another key to finish the maps and farm fast.

I’m also of the school of thought that goes, emblem the 4s so they become almost like 5s. 4s need considerably less emblems than 5s, and they’re faster/easier to max anyway. I only have 4 maxed 5*s at the moment (each with 1-3 emblems only), and 6 more on the way.

But I have 17 maxed 4*s already, all emblemed, and only two of those duplicates.

I use 4s for Wars, for Raids, and for both Epic and Legendary tiers of events and raid tournaments, so working on 4s gives me the best return. I throw emblems to the ones I use most per class. Brought Proteus to +18, so new emblems go to Kiril (both are Wizards). It’s an easy choice for some classes (Li Xiu is my only Monk, Sonya is my only Paladin).

I did give emblems to 3s while I was still raising my 4s, so most of my maxed 3s have at least 1 emblem. But I decided to focus on 4s, again because they give the best return.

I have max emblems on Rigard and Sabina. I will also finish Kiril and Gormek (both +19 atm) and Melendor (currently +18). Have used them enough to feel good about those choices. Also plan max emblems for Boldtusk. Undecided and Sonya and Li Xiu, but they are getting the emblems in their respective classes for now.

Fwiw, I love Danza and took him to +19, but I just reset him for Domitia. He is worthy, though. @Halifax, glad to see Gormek on your list. I feel like people underestimate him. With emblems, he’s VERY sturdy.

I do not emblem any 3* or below. That’s just personal preference. Embleming 3* can actually be helpful for raid tournaments and rare quests, but my primary focus is epic and above.

Same here. I’m more of a focus on your current level type for emblems. I moved 3* emblems when I started maxing 4* heroes.
I wish I could do better in 3 star tourneys, but my bread and butter heroes are all 4*. 2* heroes will get fed, nothing more. Unleveled 2* brought 50% loot rewards in last (first) 2* tourney, but I wasn’t paying attention and don’t think I’ll join another.

Emblemed 4* are great, aren’t they? They were good enough to get me the top score for both alliances in our last AW at least.

Absolutely. I’m working on maxing 3 of my 9 five stars now, but the cost for 5* emblems is too high.
I can’t fault anyone that emblems 3* either though, because ideally you’d want to build a strong core and work your way up.

Oh yeah, when I did the 3* raid tournaments, I faced one team that had 2800 TP… in a 3 star tournament. Kudos to them, that was impressive.

None of my 5* have been final ascended yet (since I can never seem to find 4* AMs anywhere anymore), but I have a healthy bench of 4s who are happy to hold the emblems in the meantime.

Yeah, I’m still working on my healthy bench, but with 27 4* including 9 at 3-60 and 2 unleveled, I’ve got a good start.
3* I have 42 and thinking of trimming the fat soon. The only dupes I have are Atlantis heroes, and when 2nd Proteus gets maxed it’s shutdown time.

The four stars I would emblem are as follows: Sumitomo, all three pulverizer bros, Kiril, Cyprian, Sonya, Wilbur (if I had him), Li Xiu, Proteus (this x1000), Rigard, Caedmon, Jabbar, BT, Colen, Kelile. I would list more but I do not want a proverbial wall of text.

In terms of three stars, I just emblem the ones I know I am gonna be using a lot. I like to keep them around for war bench depth and I am borderline c2p and f2p. Also I have yet to get any 4 star green heroes on my main account. Even though I have enough sturdy shields to ascend three of them.

Has been a very reliable tank in my raid tournament defense when the situation calls for it. I also use on my 4th war team or in a green stack. Is the only hero whose emblems I have not moved to 5* heros. Very effective. I would highly recommend 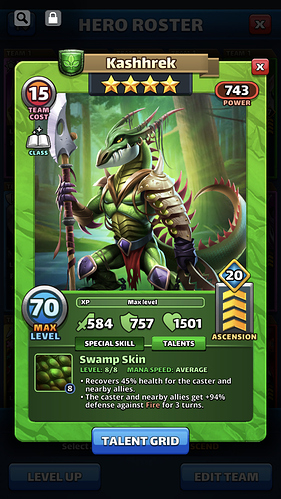 These are my fave fours and I use them lots. Remaining emblems are on my five stars in my defense team

Recently I decided to use my saved emblems on *4… my choices were.

I guess the short answer is: it depends on which heroes I have in which classes, and how my team changes over time.

I haven’t seen Gaderius mentioned. I emblemed him too. Melander just doesn’t do it for me.

PS I wish I had Proteus

I love teaming up my 4* pulverizers with my 5* snipers (or in blue, Richard).

The last is really cool when 3 heroes die at once.