Where are you getting your ascension materials?

This may not be the post you are expecting. I accept that 4* ascension mats are rare. Approaching the 15 month mark, I’ve ascended two of each color plus a bonus blue. It’s not a lot, but then I don’t have many 5* heroes to ascend anyways.

No, the wall I seem to have hit is with unfarmable 3* mats. I just went through 6 weeks watching Marjana playing with a pile of pretty rings while waiting for hidden blades. Currently I have zero sturdy shields, zero hidden blades, and a scattering of the rest. Except for the 26 compasses of course.

I’ve seen a number of posts from people saying after some time the 3* mats are no longer an issue, often accompanied by screenshots with 40+ of each 3* unfarmable. So my question is: what are you doing differently?

Only things I can think of are:

My alliance kills 9* titans daily. I seem to have plenty of 3* mats. 4* are rare and I’m waiting on a lot of them.

I do pulls regularly and have only leveled a duplicate Jackal and Hansel. War chests, raid and monster chests, and titans provide all the mats I need to train a rainbow team constantly.

Hope your luck on getting mats improves.

Ever since I started facing 13 and 14* titans I have noticed the 3* mat drops are pretty great. I’ve been playing for a little over a year and I havent managed to accumulate huge numbers of 3* mats either because I’m also always constantly leveling 4* duplicates or 5* to 3.70.

Im FTP as well. You seem to be ahead of me with your 5star progress at that length of game play, maybe that in combination of slightly less luck dropping have lead to your 3* mat issue. I had a brief lull for awhile after TC 20 when I got more of the 4*s, but have now built up 24lowest and 46 highest of them at about 2yrs play.

RNG can be a beast, but higher star titans do have an impact on better odds… not alot but it adds up

IMO, the best and guaranteed Unfarmable AM is from Rare Quest… 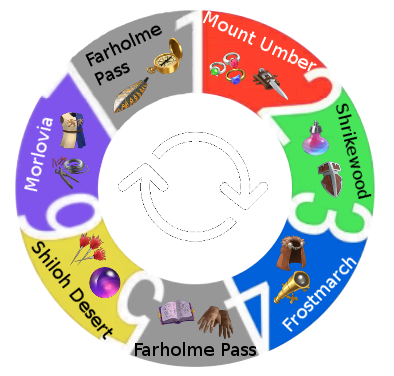 Mostly from titans. Although there’s the monthly events and the rare quests that show up every what like two weeks? Opening lots of hero and monster chests helps too. The tourneys can help. There’s just lots of mats to go around. If you want a specific mat it seems to take forever to get them. I was only waiting like a month or something for the last tabard I needed for Seshat but it felt like forever. Was tempted to buy the tabard offers but I really don’t want to spend for more than vip anymore. I’d say if you aren’t getting like regular 3* mats to the point you’re annoyed with another damn compass you should try moving to an alliance that hits bigger titans. It becomes a daily source of unfarmables.

Also I highly recommend leveling duplicates for war. Some of them are just really good to have multiples of. Like Rigard. I think every roster would benefit from having 6 Rigard ready to go in case your enemy in alliance war uses yellow tanks. Rigard is great. So is boldtusk, kiril, Grimm, Caedmon, there’s lots of staple heroes that are nice to have multiples.

We kill 8-9* titans and most of the time my loot for A+ is crap.
Yesterday I got a warm cape from a normal monster chest. Normally I get crap there, too.

I get 1.06 unfarmable ascension material on average per day. Dunno what your number is. I think it’s okay (my alt gets 0.5, is less played), but with better titans or the money for these Halloween offers, the rate would be much higher.

Edit: to answer the question - my constant resource are the rare quests. Then elemental chests, I think. Then war chest, titan and after that all other chests and mystic vision.

I’ve been playing around as long as you have. I have a dozen or more of all, lowest is Hidden Blades, and that’s because I just used some.

My stock comes from:

I am much more the typical “4* materials are a problem” guy.

I get my AM from seasonnal calenders and sometimes from mystic vision. Every other source went nearly dry

I usually get my AM from titans and the war chest most often. Very rarely from elemental chest and even rarer still from monster/raid chests and mystic vision. I have yet to receive a 4* AM from my 1% raid tournament loot. Super depressing.

As a F2P getting useful heroes will be the biggest problem quite soon for you, not the 3* mats and not the 4* mats. (speaking as a proud owner of not one but two fully maxed Kadilens, and I’ve spent maybe 120€ or so so far. So rather a C2P, but playing for 25 months now)

But leveling duplicates to 3.60 in case you get mats to max them in case they are needed for wars is rapidly demotivating me.

I had a 2 day demotivated boredom/frustration quit earlier this week as some long needed 3* non farmables were eluding me and then picked up 7 in 2 days for 9 in 10 days total. AW loot, quests, titan chest and even Mystic Vision. I’m a fairly CTP.

Mostly from the rare quests but this month has been unusual I got 3,4* mats from mv, titans war and the titan and war chests. I left my Alliance so I’m fighting with my alt in 2 man wars and im undefeated so far since October. Also titans up to 3* but the loot is great. Here’s my mats. I have 1 of each color 5* but green has 2 which I just did. Also every 4* s1 plus bunch of Atlantis as well. Basically its been.balanced other than darts which I need for Vivica. I’ve gotten tabbard from titans tonics from mystic visions and since I left my Alliance I’m getting more than before. I Went f2p months ago after playing 16months total and over a year as c2p with vip and the Atlantis gem deals. 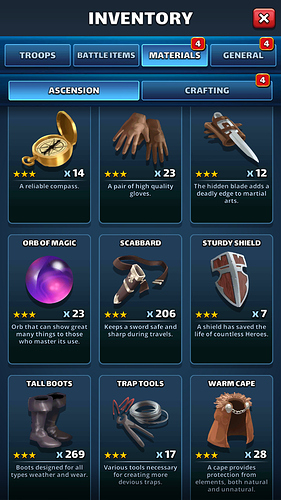 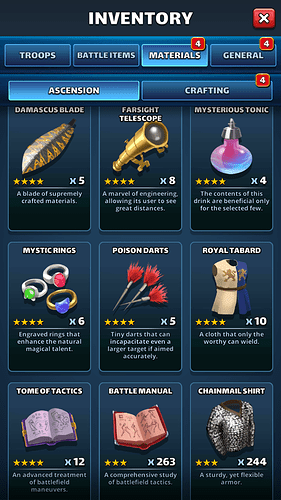 No titan skips (+25% more kills and thus materials over time)

Bonus chest every 10 Atlantis summons. Big spenders (pay to win) might open up to 10 of them each month. That’s not for me though (cheap to play)

I am quite consistently hitting top 500 in all challenge events (rare, epic, legendary), which give good materials. (Getting around 10% of my unfarmables from this).

Pretty sure, that stringing 14 stars and do good in event gets you around double the material influx. Spent big on top of that and you can get that up to tripple.

Or just get extremely lucky.

I am playing around 2 years now and got almost 20 maxed 80s.

Mats will come from Raid Tournaments, Elemental Chests, War Chests, Rare Quests and from being a Titan Butcher.

And if you buy those offers…

Ah, I forgot those - yes, that’s a good source, too…bit expensive, but, ehm…