What is the best 4 star team?

I have matts to start leveling 4 stars (need help on who to prioritize). I did one rainbow team so far, but will start doing more as I get more gloves (2) atm. Given how hard they were to come by, I am picky on who to level to max? I don’t know much about synergy so any advice will help! Thank you!

I placed a high preference for heroes you’ll use for the rest of the game, even if you get more. This tended to favor defense down, healers, and those you have costumes for.

Thanks for your advice! Quick question…Would you level Fluffy (5*) or just focus on my 4*? I have gotten mixed responses, so I feel conflicted.

5* s take a lot longer to level, so I’d start with the 4* s. Build yourself solid 4* teams and then gradually combine 5* s into the mix. Also, don’t forget your 3* s. They can bring you valuable loot from tourneys and events.
As for the choice, I would go with the same as @Ruskin505 suggested.

Scarlett with Costume and some emblems has beast mode stats. Took mine to 18 (and have the costume fully levelled)

Check out that Attack stat…insane 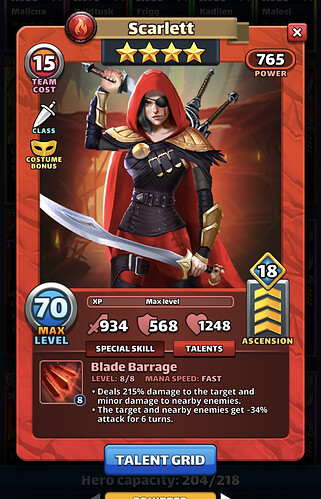 Would you level Fluffy (5*) or just focus on my 4*? I have gotten mixed responses, so I feel conflicted.

5* s take a lot longer to level, so I’d start with the 4* s. Build yourself solid 4* teams and then gradually combine 5* s into the mix

I only responded about 4s because of the title.

@YayaTheobroma gave the generally good advice that to level one five star hero it often takes 2x the time/resources as leveling a four star hero.

I’ve heard that a lot, but I remember leveling Frida (my first 5 star) early on and it helped me to have a stronger hero than those four stars. I don’t think it’s a bad idea, but you have solid four star greens that also deserve attention.

The advice I heard early and often recommend is to just build up your best 5 titan teams (one of each color). That will probably get you covered on the variety of heroes you want in each color including healer, defense down, and various status effects to go along with it.

Definitely mist for yellow
I’m going to be a little bit unconventional and say Jack o’ hare, if you’re playing green stack. Since you already have almur, you can use his green defence down, together with mist’s special defence down. And then find a regular defence down hero. That Jack o hare AOE is going to wreck teams. Plus they’re all fast, so the mana speed synergy is there already

@Cheds That is insane!

…her defense has me worried a bit though, do you have issues with her lasting in raids/war or do you only use her in events?

She’s a glass hammer for sure. There to boost tile damage. I use her on Titans too and she can’t take a hit but that’s what revive scrolls are for

…her defense has me worried a bit though, do you have issues with her lasting in raids/war or do you only use her in events?

I use her a lot in raids. She evades damage from special skills often enough. Let’s not forget that her special skill reduces three enemy heroes’ attack by 1/3 for 6 turns, and that is a lot and serves as further protection. But even if she dies, her tile damage boost often wins raids.

@Moka, sadly the 4* heroes you already leveled aren’t amongst the first you should IMO. Almur is good only if you already have a solid green-heavy team in which to insert him. Mack is fine if you have the healers to support his counterstrike. Zila lei is meh with her inability to hit specific targets. Li Xiu is great at defense, not so much on offense. Mack, Rigard and Proteus are the only ones who are fine amongst the lot.

I don’t know if you are free to play or cheap to play, but since it looks like you are one of the two, I’d say focus on Boldtusk, Kelile and Scarlett. Those (+ Mack) will form the core of your first offensive team with which you can win raids in Platinum, complete Challenge events Legendary stages and will be good in a 4* or even 5* tournament (of course hope that reds are allowed).

Next in line should be your blue team, with Kiril and Grimm ascended.

Tiburtus should complete your 3-purple stack whenever needed, with Sabina under consideration later.

Also Tiburtus or Grimm can for the time being complement your red team, since that team lacks a defense debuff hero.

Melendor, Caedmon and Tettukh should complete your greens, but IMO even with them, the green team will be weaker compared to the blue or red team.

@Saros Wow what a great perspective! Thank you so much for your advice/direction. I have to admit I feel the same about Almur, I know he’s amazing so I rushed to level him; but he’s been useless as he’s always the last one left alive and I often lose because alone he’s not doing much.

Zelia Lei has been good at events to get rid of the minions near the boss so she’s done well but I often feel like I can’t say she makes a huge impact all around.

You are right I am cheap to play. I have paid if I’m after something. I wanted Underwild and Valhalla so I paid some and got some good 3* and 4* but not much 5* yet but as everyone mentioned I’m good with that for now as I can’t level them now anyway.

That’s why I asked on here because I feel like I want to do better. I get into platinum but can stay long so I’m glad you addressed that. Your right I’m missing an offensive team because the heros I leveled don’t really go together well.

My defense team so far is… 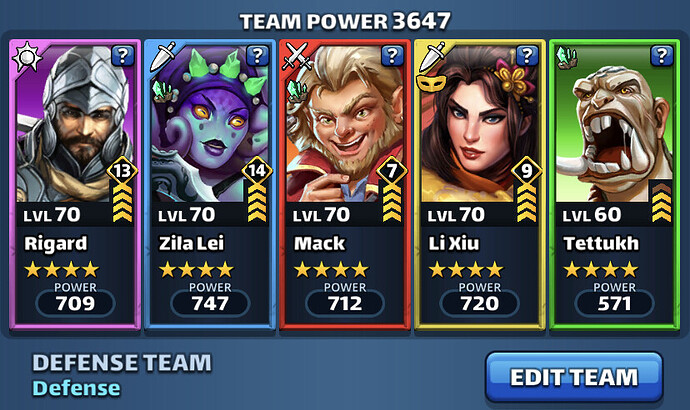 I don’t think you have a better alternative at present. You could consider Li Xiu as tank but Mack is probably better if you are sticking to the edge of the Silver/Gold arena. This defense team will not be very good if you go up further. Also filling up your raid chest will be hard with the heroes you have at present if you choose to venture deeper into Gold or even towards Platinum. So you might as well do as I did for quite some time: Cup drop and hold your cups in the range of 1100-1200, open your raid chests in Gold if possible, and only progress further when you can color stack at least three decent 4* in at least two different colors.

@Saros I’ve been pushing for Platinum for POV so I’m currently at 1908 cups. (8 more wins to get it

After POV I will definitely take your advice and cup drop, way too to stressful up here!

Thanks again for your advice.