What do you do when you run out of heroes to level?

I’ve been playing for a hair under a year and a half, have a fairly deep roster, and am getting about to the point where I don’t care to level many of my remaining heroes.

I’ve been leveling several duplicates and some previously unused 4* that will only ever see action under very specific tournament conditions, but I’ll likely be at a standstill once I finish those.

To any of you in a similar situation, what’s next? Do you continue to level heroes you know you’ll never use just for the sake of having a project to work on? Do you load all four TC11s and let the feeders pile up? Maybe leave one TC open in case something else comes up? Let the TCs sit empty?

Do I carry my high school diploma around? What do you do with your hair? What happens if there’s inclement weather? Where do you… what do you wear? Can you wash clothes in the dishwasher?

Luckily I do have plenty to work on with buildings and troops, and I’ll still be chasing event heroes, HotM, etc…

I’ve just always had a reason to churn out feeders until now and the concept of leaving them to pile up in my TCs is borderline insane to me. I don’t know that I’ll be able to resist the urge to collect them when the little icon is on my screen.

Unless you have full mono teams that can roll any tank strategy in war, yer not yet done.

You mean these icons? 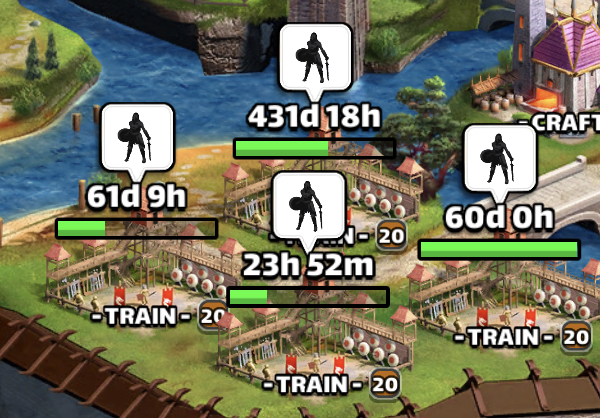 Assuming you have already levelled useful dupes like Rigard or BT and other neat 3* for farming rare challenge event coins:

That is a solid point. Perhaps I should clarify that I’ve basically done what I can with the heroes I have.

What do I do with my TCs in the meantime?**

Yep, many good dupes… though I could probably still benefit from adding a couple more.

I hadn’t thought about loading up all four TC20s, though! I have literally every classic hero… so it would just be a food bank.

Lordy… just looking at this raises my heart rate, blood pressure, and gives me an unscratchable itch.

Do you load all four TC11s and let the feeders pile up? Maybe leave one TC open in case something else comes up?

I keep a tc20(collecting) and 3 tc11(uncollected) running.
Map’s feeders goes to heroes that I would use on tournaments and/or events.

I totally here you OP. Running out of tunes to level as I wait for mats. Always used to only feed “same color” but last few months don’t care because don’t have a rainbow to level. I figure to just save up feeders ( I know it’s hard because the habit of levelling) for trying the old “ level first day “ the new HOTM I want. That be cool to do atleast once.

10 pulls for fun. RnG Gods knows you may pull a worthy hero, and another Kingston.

I wish I had the same problem. I keep run out of feeders due to two tc20 running 24/7, another tc13 as a recruit/food bank. Only one tc11 is producing common and uncommon heroes.
Thus, I have to run tc19 in between the tc20 production que.

I am still very far away from that.

Level those healers you refuse to use in wars!

In the OP’s case, I’d worry about what to do when the time is imminent, but I might start moving things toward a more TC20 heavy strategy to give myself more wothwhile options, if there are some 4* or 5* heroes I could use.

I’m trying to figure out a similar question but my lack is color specific. I have no non-duplicate heroes of one particular color to level, but I am still missing a few classic heroes that could show from TC 20 at any time. My thought is to simply use the feeders of that color to feed off-color, and essentially only have 4 projects running right now.

Doubt I’d ever run out of heroes to level… More likely run out of ascension materials to level heroes rather than the other way around. 1/2/3/4/5

… So many to collect, and way too many to max…

However, if I do eventually run out of heroes to level, guess I’d /wrist… Doubt there’s anything worth living for after that…

I’m getting there myself. I just need a solid green 5* hero (hoping for Kingston or Evelyn, but my existing Kadilen isn’t terrible to ascend if lady luck [or Lady Locke, do ho ho puns] doesn’t favor me).

Currently maxing out good 4* heroes to 3/60. I have the mats to ascend some colors to the 4th tier, but I’m waiting to see if I pull Kingston during Pirates or Halloween, so I don’t have to leave a duplicate at like 4/42 which would just personally irk me if I’m lucky enough to get like Finley, Peters, Kingston, or heck even Lady Locke and rainbow feed them to max.

In the pretty likely chance I don’t pull a great green hero, I’ll probably run TC20 and start banking unclaimed feeders to speed level a hero. I can hope for like Leo, Joon, or Lianna who would be pretty good for me personally. The rest of the 4* classic cast I’m not terribly interested in since I have a lot of duplicates already of Rigard, Grimm, Sonya, Boldtusk, Kiril etc. I’d like duplicate Melendors though, but that’s about it.

After I get Lianna and Joon, no idea.

I keep a tc20(collecting) and 3 tc11(uncollected) running.
Map’s feeders goes to heroes that I would use on tournaments and/or events.

At the moment I am running my TC’s as one TC20 (collecting, as I still would like Sartana) and 3 TC11(uncollected).

I just swap food and recruits around between the TC20 and the long-queue TC11 to keep resources balanced.

Feeders heroes gained from the map farming go to whatever duplicate 4* I think would be most beneficial for wars (Proteus at the moment).

When I get a 5* I want to level, I will have plenty of feeders to start with and also change the regime to bring in a TC19 and a TC2 for a while (to replace the two short-queue TC11’s)