I noticed in war we got paired up with a team score 100k and we are 75k. I thought it was odd. Halfway through war I had a detailed view on their players. This is one example high power lowering their team. They had at least 7-8 teams do this. It’s obvious they arent noobs. Is this a tactic to hide their deep benchs/lower target score/manipulate matchmaking? We had 4 noobs and they had none…only teams disguised as noob accounts.

Could you screenshot both alliance 's point table?

If they are deliberately using a weakened war defense they are putting themselves at a disadvantage. The war matchmaking assumes your top five heroes (one in each colour) as your war defense. The actual war defense they use has no bearing on the matchup.

They are just making it easier for you to one-shot them.

Maybe they are deliberately throwing this war to get an easier matchup next war?

Is this Alliance score or War score? Alliance score has no bearing on matchups. War score is based on your top 30 heroes and top 5 troops, with a performance factor from previous wars. There is a weighted boost for your top 5 heroes but not for your actual war defense.

I agree with @nevarmaor. take a victory and be happy. You still have to play the battle though.

I have seen this ‘tactic” used several times before mainly in small alliances or by new players.
It’s not a cheat as such.
The belief is that it reduces the points available to the opponent so puts you at an advantage.
However, it simply doesn’t work and puts the player and their alliance At higher risk of defeat

I think they are tried to transfer war points (members total war point is fixed 1502 for both alliance) to +4k players who harder to kill. This approach may useful at low point alliances with powerful players but it is totally gamble in my opinion.

Sounds like it was a mismatch then, even with their deliberately weakened defenses. They happen every so often.

It’s still a poor strategy, especially with a more even match up.

No mismatch and no cheating, alliance score doesn’t equal war score. I checked and saw that you both are still in a close range of your warscore after this war which shows that of you had close to equal warscore when you were being matched

they just outsmarted you by shifting the war points onto their bigger players. Only works in smaller allainces though

First off, if you can flip the opponent at all you can flip them easier if they do this “points shift”. You can’t strengthen the bigger players’ defense beyond what is assumed in matchmaking, only weaken the smaller players. That means your weaker players have a better chance at one-shotting their weaker players, leaving more flags to tackle their stronger ones.

Second, if you can’t flip the opponent then the shift makes no difference at all unless your opponent can’t flip you either. If there are no flips at all then reducing the points available from the weaker players means fewer points per flag. Only in this scenario does this strategy make sense to me.

Ah i see, well this seems to explain the matching. I knew something was off but your explanation is the only one to find out some useful information. Thanks appreciate the input. Cheers!

Let’s assume the no flip case. In that case, shifting point to the players that are less likely to be taken out will help a bit. But if you can’t flip them once and they flip you I agree it ends up being moot in most cases.

I do find the “no flip” case to be hard to swallow though. We take out teams 400-600 points higher all the time…often in one shot.

Yes I agree, even my casual non-coordinating alliance usually manages at least two flips per war. A war with zero flips per side is very situational and probably two alliances of relatively new players.

We are facing at war a situation where the opponent alliance used 4 and 3 heroes teams at matchmaking and at war all teams appeared full equipped with 5 heroes!

Is this cheating or nor?

The info about that alliance was obtained by clicking the “Alliance Info” button.
(If you need the alliance name and info I can sent it to you). 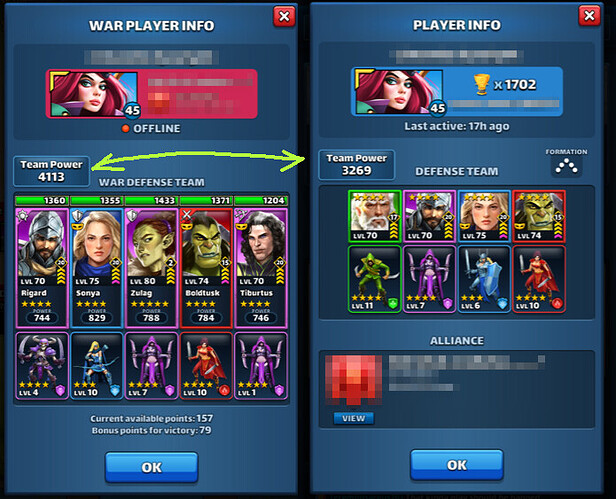 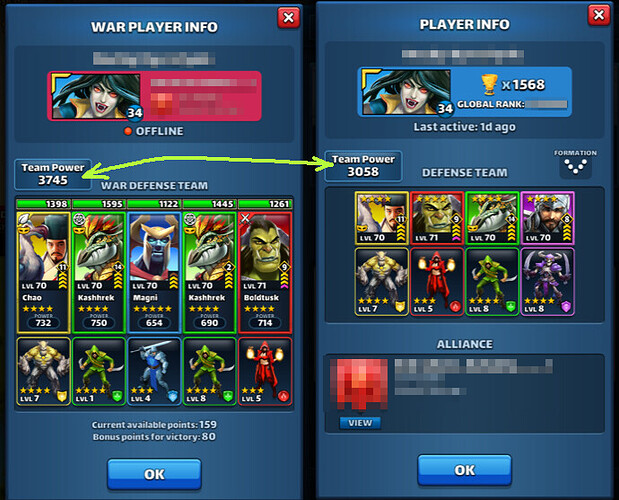 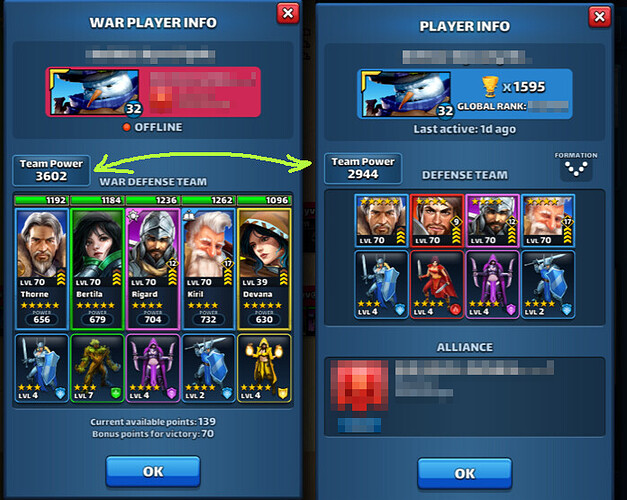 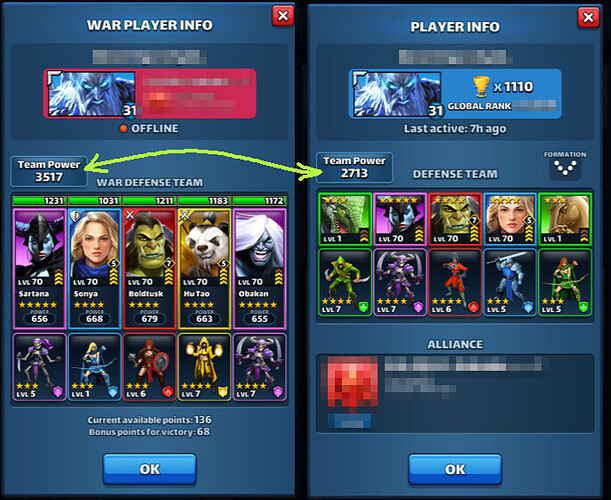 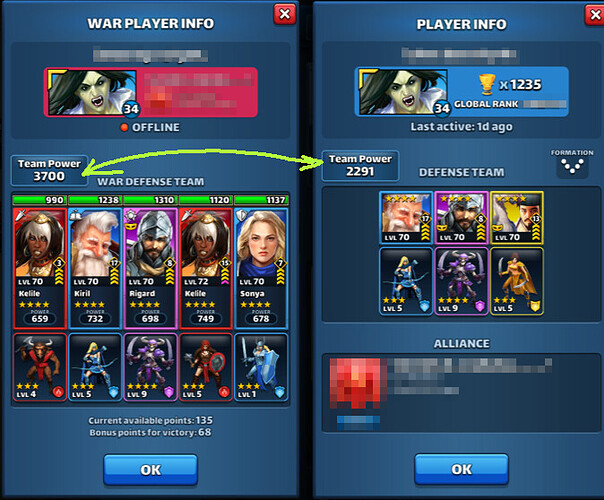 This is not cheating: The match making is based on each players 30 best heroes and hus five best troops. If they dont present their best defense in their alliance profile this will not change the match making one bit , but would be a case of deliberate cup dropping.

You are looking at two different defense teams there. The war defense on the left is separate from and independent of the raid defense shown on the right.

If they are using 3 and 4 hero raid defenses it is likely they are cup droppers.

Man at least when I cup drop I have the decency to put out 5 heroes. These guys are total douchebags.

Is there a way to make them pay?

It’s not my style… report them?
Or nobody cares…

Report? For what reason?
They have done absolutely nothing wrong or forbidden

As nobody could find any hint of cheating in this case (me neither), what would you report or make them pay for?