Thoughts on this defense?

I recently got Alfrike and almost have her maxed, I was thinking of trying a defense team with a Telly tank, flanked by Santa and Alfrike. I can have about 18 emblems on each of them, maybe 19. The wings could be fast snipers or very fast GM And Clarissa. Is this worth moving around emblems for us it kind of crazy?

Just looking to switch up the “usual” defense team with something new and thought this could be fun/punishing without a good board. I have level 23 mana troops for ever colour but blue (which I have level 25 crit troops) Thoughts? 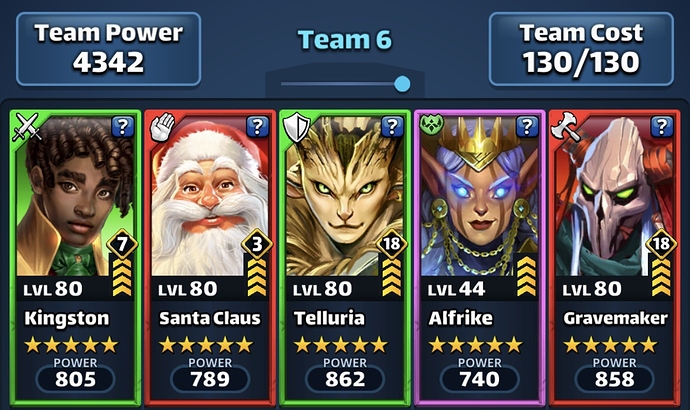 Good set up but 2 slow heroes at flank are going to make it easy on the attacking team. I do like Alfrike alot as well as Santa with the addidtional minions. But, you have no Blue to counter people bringing red to beat telly.

Do people bring blue against Telly? I don’t, but I don’t have tons of options. I have Fenrir and Arthur maxed. I guess Fenrir could be an option to replace Kingston above.

Stacking red could take Telly out Quick, but if they fell short of killing her and she slows down mana generation for the attacker, I thought It might give Santa and Alfrike time to fire.

I also have The following here’s maxed:

I think that covers most of what’s not listed above.

I thought It might give Santa and Alfrike time to fire.

It won’t. Good players will never let Alfrike fire. There are too many counters now to very slow heroes in defense. She’ll be dead before she can do anything that would change the outcome of the fight. I have her, fully emblemed, and I tried many things (tank, Telly flank, with Sif mana+, etc) without much success. Clarissa would be a better fit I guess.

And think about replacing Santa with Kestrel too. Faster the better these days.

I agree with @Chadmo. On paper, such defense would be formidable. But… with no blue hero flanking your Telluria, all red tiles from a red stack of heroes would either deal strong damage or neutral damage. Red hitting blue deals weak damage.

Buuuutttttttt… for you to truly know it for sure, max them and emblem them to +18 or +19. Do such sacrifice for the benefit of the forum readers. I for one am flanking my Telly with Snow White. And when i wake up in the morning, surprise surprise…

Thanks for your opinions. I wasn’t sure about it myself, but thought this was the place to ask. This is my current Def. sometimes I flank telly with both GM and Kestrel. 2 nights ago I was attacked 30 times on def. and I only lost a total of 4 cups. So it is a successful defense, I was just curious about the possibilities with Alfrike. 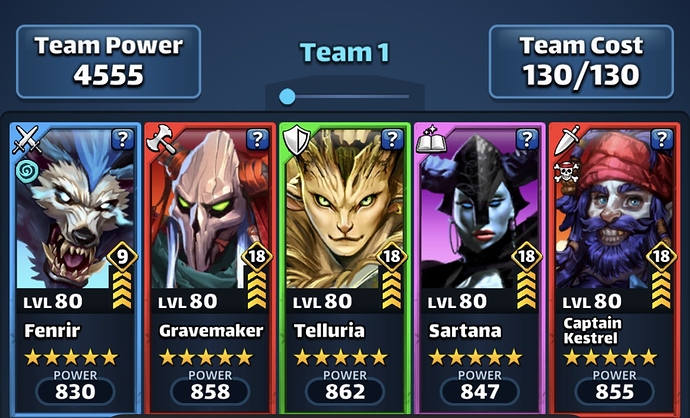 This is way better! You CAN try the other one for fun… but I assure you, this one will hold cups way more.

A meant Delilah, not Athena facepalm

Nevermind! I changed my mind!

FENRIR is best right wing champ. His special needs to go last, so there is a better chance, he will hit with special a below 50% target. Him going first on the left side plays into opponents favour.

Switch Kestrel and Fenrir and Gravemaker with Sartana positions.

You are good to go

If you have Athena, I would put her in over Fenrir. I believe Fenrir is better on offense where you can pick the heroes that have lower than 50% health.

I had Fenrir on right flank for the past 5 months and just changed him to left this week. Just trying it. I consulted the positioning guide and With these 5 heroes it seems to have their best or second best positions all around.

He might be better on right flank so that other heroes can hit first, but he still charges late on left flank giving him a good chance to hit when the enemy is below 50%.

I just edited it, I have Delilah, not Athena (I wish)