Telluria- Strategies to chop down the forest

Share your best strategies, hero combinations, superstitions for beating the

I don’t have strong depth in red, haven’t been lucky enough to score a Gravemaker. C Joon, Malosi and G Jackal packs a solid punch to either take Telly out or shush her enough to overcome the hit.

Depends on your heroes. 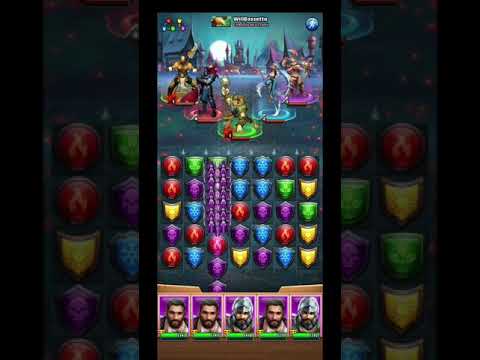 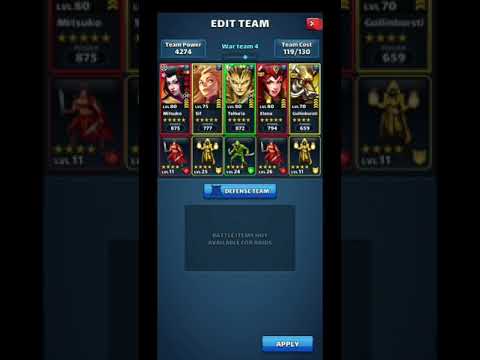 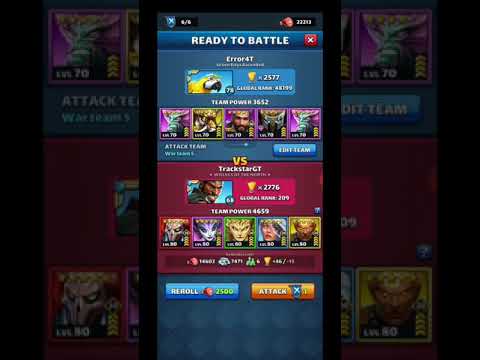 Double heal with heal over time and normal:

Thanksfully in my alliance we dont face a whole alliance of telluria so i dont need to have six anti telluria teams yet. In raids i use this with relatively good winrate. 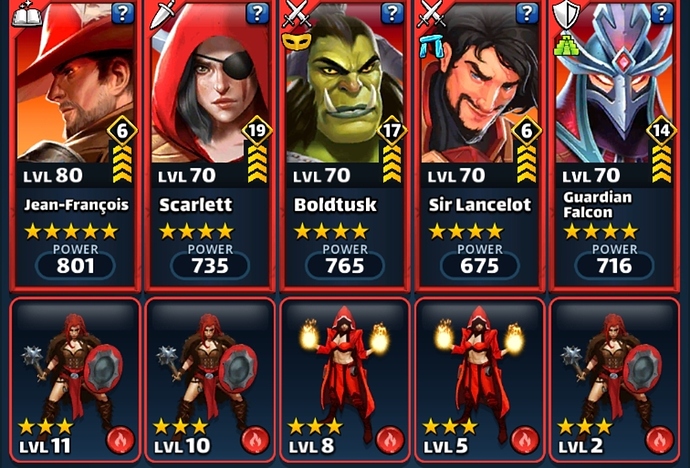 JF and BT protects me against Vela . The others do the damage.

Another team that could work against tellu is this 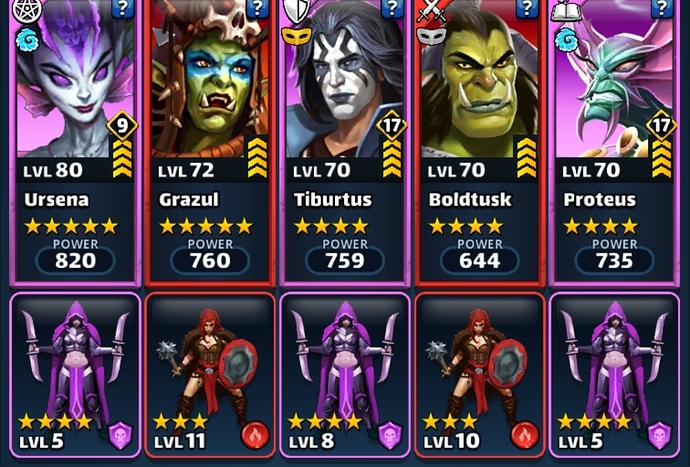 But thanks to RNG that doesnt want to give me a red mana troop i cant unleash the true power of Grazul(charge her in only 6 tiles) so i prefer to kill telluria fast (first team) then wait to protect with Grazul.

Another strategy is going full mono and hoping for a decent board. I think purple,red,yellow and green can perform well going mono. Not sure blue, depends on the board and the quality of the heroes. When i finish my Skadi i will try raiding tellu with blue

I got a 1-shot in war using mono blue

Anyways my strategy is to always bring a cleanser or speed buffers to get rid of the mana debuff (hence why cSonya is there). I also bring another cleanser if there’s multiple sources of dangerous DoT (JF + Vela, so hence why Raffaele came along too).

I will also bring a dispeller if there’s an annoying buff that I need to get rid of. Since I committed to mono-blue and JF was there, I brought Sonya+CB.

Magni and Thorne are for pure firepower. This team would’ve otherwise lost without them, because really the only way I could kill Telluria with mono-blue is to hammer her with skill damage. Once she was done, JF and Kestrel were easy prey.

Nice , what does more interesting is that you have used very acequibles blues, nothing stellar like finley or ariel

just 5 Fire and pray for a good board, thats my strategy always…

This team worked for me because I brought along two powerful skills (Magni and Thorne skills are quite strong damage-wise) to bust through Telluria. Without their skill damage, I can’t rely on blue matches to hurt her much, even from mono.

I don’t have Finley, but obviously he would’ve been great too. Probably a better alternative over Thorne.

Also I have 4 blue crit troops in that team too, only one with a mana troop is Sonya+CB. I specifically mana trooped her since she charges in 7 tiles with it + emblem mana node. She helped dispel Telluria’s healing and JF’s ice shield, which was important for this team to get the damage I needed. Crit troops help purely for increasing survivability of my team AND tile damage thanks to the higher crit activation chances. Honestly, I’m liking crit troops more and more over any other troop the more I play E&P.

Raffaele vs Ariel, well clearly Ariel is better but I don’t have her. Raffaele works fine though, so long as he’s supported by another cleanser so he can reliably fire. That’s why I brought cSonya too, since he alone can’t reliably charge as often as JF does to keep cleansing the burn.

You have encouraged me to try my blue team against telluria. Anyways it wasnt at tank position if not as a flank. But it worked well. It seemed pretty ok because sonya against BK could give me an advantage

That’s why I brought cSonya too, since he alone can’t reliably charge as often as JF does to keep cleansing the burn.

Shes a very handy tool . One cannot have enough dispelers or cleansers and being fast speed with a mana boost without doubt pump sonya to a every day battle horse.

Dang, Mitsuko is amazing! Strong against Telly and for those teams that stack blue with Telly as a strategy, reflects it back at them. Don’t see her often - not many people have her or underrated?

Sonya was the first blue I maxed and she is a mainstay on the hero roster. Attainable and faster/cheaper to max. If only I had her costume… maybe next month.

Odds of getting her are lower than that of hotm.

You don’t see her often on defense because the people that have her, probably also have gm.

You don’t see her often on defense because the people that have her, probably also have gm.

I wish i had GM

i pulled mits last Atlantis. Still untouched due to lack of rings and blades

I’ve just been using my mono purple team against her or pretty much any team over 4600. Unless Finley is there I’ll use mono red with Mitsuko. 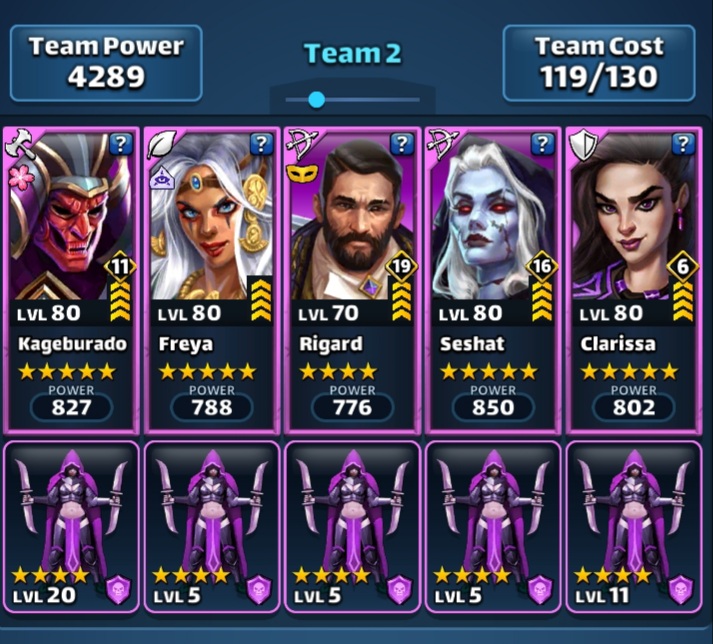 BT - Heals and adds a much needed health boost
Grazul - Small heal, charges in 6 tiles and often blocks Telly’s mana reduction. With drake, block the blind
Jean Francois - slow burn and a defense reduction block. replace with Falcon if Kingston on D.
Mitsuko - SO useful. Often kills Vela or Finley with the relfect
Vela - DOT and attack drop. Occasionally use Fenrir for the insta kill for weak enemies.

The only way to defeat telly is how small giant likes you. You can have the best red team there is, of you dont get the stones, you will lose anyway.
I have a pretty good team for telly/vela. But i only win when the boards are good.

This is my chop team for Telluria and blues. 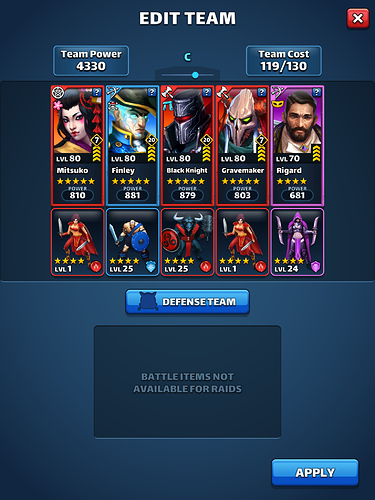 Tyr will be joining the party soon