A walk-through, talk-through on my best practices for taking her down (After many beginning struggles) to show she is not OP as many claim. 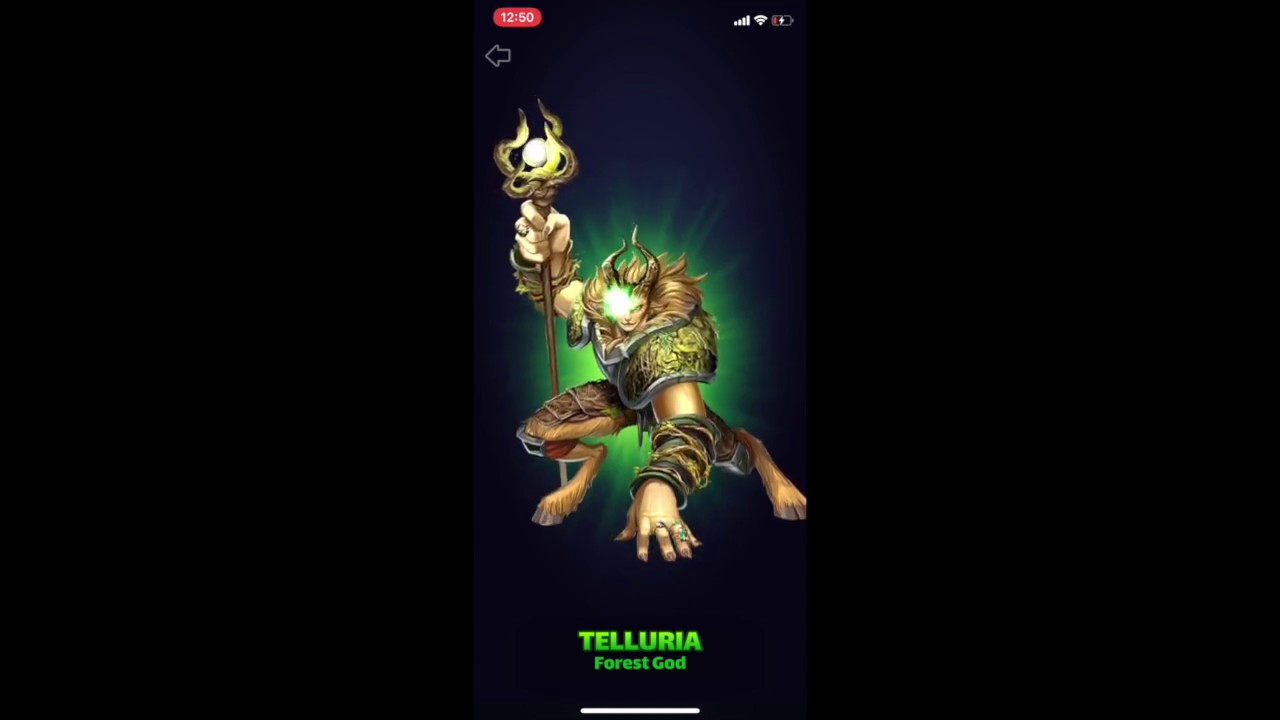 Reading a lot of feedback, and surprised at how many people are saying I only beat her because I have high troops. Ok the troops are high, They were just as high when I used 3:2 with BK, JF, just as high when i used my fully emblemed Yurple team…still I kept losing and OFTEN.

It wasn’t until I used a specific combo that I had consistent success and thats what I wanted to show. Grazul is absolutely a great asset in fighting Telluria. Any hero that reduces are stops or clears the mana drain is key, and thats what I showed. I also believe that Fenrir has a role of killing Minion heroes and is very good at it, so used him even at only 3 70.

In the end, I LOVE Telluria, pretty much been raiding with her and Freya together consistently, the only reason I don’t have her at tank is because emblems, and I love Boss Wolf. But wanted to show that while she is great, she is not OP, and we can all find ways to beat her. I may play around with Hansel and Gretel later too.

So just for fun, and for those claiming there are no take aways in my talking points and think i simply overpowered them, here is a vid of all 3 70 and below with only 2* troops.

Update to break it down generically since we all have different rosters: 1. Speed 2. Dispel/block 3. Heals/Cleanse 4. Max emblems to be on par with defense TP you are facing

Feel free to fill in your favorites for each…mine are

I’ve managed to take her out quite easily by just targeting her directly. Not sure why such a fuss about her?

There is a entire thread crying for her to be nerfed

red mono and she is gone lol

Which is one of the set-ups I covered

of course, you can only do that once, maybe twice in war…then you have to use different compositions…so always healthy to think outside the box

I’ve taken her out with a green mono already, and i mostly have 4*s, i promise you, she’s not that great in my eyes.

I couple of points, if I may.

I normally go mono against teams well above my tp, which I understand is risky, but I’m still learning and my win rate dropped off. Many of the telly teams I face are all emblemed <15 while mine are mostly ≈ 5.

While you say your team isn’t massively emblemed, it is made up of HOTM, season 2 and event heroes. Graz, in particular appears to make a big difference being v.fast. Could you replace her with a s.1 5* and see if you can still produce results?

I find that if telly and Vela fire once, I’m out. I’d be very impressed if you could engineer that AND then rescue the situation

. Is it the case Zim is the only red cleanser? She would definitely seem very important there.

I like your point about reflect, I will try an emblemed boril, as my closest analogue, maybe, and see if that helps.

I’m certainly not in the nerf camp…I remember similar issues with Guin and kunch and while they are still excellent, they aren’t frightening. I think where I empathize with the anxiety about her is it seems that fairly rare heroes are required to achieve a high win rate.

But I’d love to be proven wrong

My last point, which is the one I really want addressed, is why your avatar is Hank MCoy and not someone from Ender’s Game

I don’t have any S1 5* Fire, but would use Marjana and/or Elena in the mono team if I had them.

Mitsuko, grazul and zim seems to be the best trio against her. Just having counterattack heores like boril/Elena wont really help, coz you will still take the damage and ailments from vela and telluria, and emblemed Finley can pierce through counter attacks. So I think mitsuko and grazul are the most important heroes, you can take some other cleanser instead of zim if you don’t have her.

I felt inspired, so I hit three telly tanks (all with Vela flanks!) and only lost one hero in total.

Here’s my team. I think Marjana could easily sub for Tyr because only his hit was significant, he didn’t need to resurrect and possibly BT would do for Anzogh, although his initial damage stat is low. 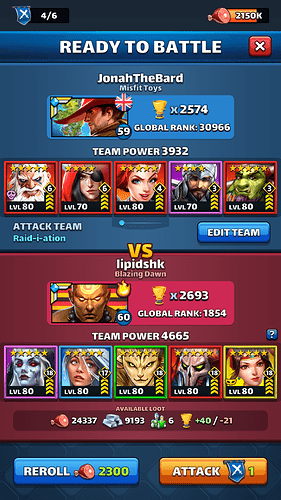 The difference is Rigard as an insurance against all the DoT and ailments.

I would normally take Wilbur, but I think he can actually be counter productive when taking out the tank is of primary importance.

Anyway, thanks for helping think it through a little differently.

Only thing i wish that was done different(which someone else may do) is hit 6 different telluria teams with 6 different offense teams which would give a pretty close war feel of how she does(though without the boost and inability to rematch etc, raids are a bit far from wars but closest thing we have to reproducing war results outside of war)

Biggest reason i say that from a personal perspective is i find my reds do well, but my neutral colors such as purple, yellow, and green struggle a bit then of course blue struggles a tad as well. Do they lose all the time? No. But it’s taking some adjustment on my end for sure to move away from the normal guin/ursena killing setups

I think 7DD just faced telluria tanks in war, which they won but it’s also 7DD so idk how relevant that win is for the rest of the population. Haven’t seen any videos or chit chat about that war so will be interesting to see if more teams use her as a tank in war and hopefully we start seeing some more public feedback & results soon

Noticed you got some feedback about using paywall heroes, honestly you used what you have available…that’s part of the game

If others want vids that only use s1 heroes, they have the ability to raid and record themselves if that’s what they want to see.(just like i can do the same for the 6 different team attacks that i wanna see as well)

Anyways just wanted to say thanks for puttin time in the vid. Did link to Saders chat as they’ve all been goin nutty over her since her release so figured they’d find it interesting

Thanks Rigs, appreciate the feedback as always.

I just did a vid of me using all 3 70 and below with 2* troops taking on Telly, but will post tomorrow since I’m in bed lol

She definitely is one of the best tanks in the game. Before her, Kunchen caused my highest number of losses in percentages, now she does. I use 4-1 red, and she needs 5 red tiles to go down. If she fires I normally lose, meaning it comes down to lucky boards for me. I use Marjana +8, Lancelot +1, Elena, Vivica +8, Boldtusk +8. Guess I should try replacing Viv by +20 Rigard for a faster dispel, maybe it’ll make a difference…

Good stuff @Ender_BattleSchool!! Thank you for the post. Going right into my alliances album of how to kill Telly!!

P.S Wouldn’t mind a tag myself for that next video @Ender_BattleSchool. Thank you Sir

I’m still experimenting with different setups to beat her, but not demanding she be nerfed. If I don’t succeed at something, I keep trying different tactics until I can.

When I first started seeing Guin tanks, I struggled. I went hunting Guin tanks with different combos until I could beat her pretty regularly.
Then GM came along, and I struggled with him at first. I did the same thing. I practiced against GM until I could beat him consistently.
Then Aegir showed up. I had to switch tactics again.
Then Kunchen came along. Same thing.
Then Ursena came along, and my tactics from Kunchen weren’t quite as effective on her. So I changed tactics and practiced.
Now Telly is the shiny new toy, and I’m getting better at beating her (and her obnoxious flanks, GM and Vela).
Eventually there will be another powerful new tank, and you know what? I’ll learn how to beat that one too.

Ever since am done with Sonya costume, Telluria is no longer a headache. It used to be the mana block which is the most annoying of her many specials but the fast charging Sonya costume help big time. Grazul could do even better.
What makes her deadlier was the fast and average AOE around in Vela, JF or Ursena, Neith and co.
With below average board, the combination will destroy our team in no time.