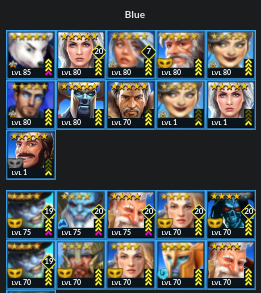 I’m f2p so no summons coming soon.
I have 21 scopes so low regret if I max the “wrong” hero.
I don’t have emblems to give to any of the potential choices.
I rarely do mono. I probably use rainbow more often. I generally do some sort of 3-1-1, 2-2-1, or 2-1-1-1.
Generally I expect the ascended hero to not see too much action. Most use will come in rush war and against red tanks (we’re ranked around ~1100 so red tanks aren’t too common).

My evaluation of the heroes:

Thorne: I don’t see a reason. Richard with costume is Thorne with worse special damage, attack down, and can charge in 9 tiles.

Isarnia: A few months ago I thought I’d be likely to level a second for defense down. But between first Isarnia, Grimm, and two Franks, I don’t see a need for another one who will get used less than those 4.

Glenda: cleanse. Viv, Raf, and Glenda are my only legendary cleansers. I can always use more, especially in Rush.

C.Richard: 9 tile charge. My C.Richard is a good follow up to Frida. A second one doesn’t have the same synergy. Maybe paired with Isarnia in rush?

I really see it as a battle between C.Richard and Glenda. If it weren’t for the costume, I’d think it would be Glenda easily.

Thanks for the help.

I love my Thorne, although he doesn’t see much action anymore since Lepus went to 4-80…

BUT - he would be a unique hero, not a dupe…
He hits a bit harder then Richard which I would see as the main reason for my vote…

Probably Thorne based on your situation. Variety is good and none of the dups are game breakers

Based on how much can Glenda and Throne do at average speed… Glenda. She hits solidly, cleanse is awesome and minions are a bonus. Increasing others damage is always nice when you can use it properly. I can see two Glenda’s working good alongside C. Richard and Kiril (both costume and naked).

I wish an Isarnia voter would speak up about what I am missing.

I generally do: Kiril - Frida - Isarnia (sometimes C.Gunnar) - Jott - Vela
I can see the idea of adding Glenda, Thorne, and/or Richard there. Frida is limit broken so her hit is pretty hefty. If Richard or Thorne get emblems that could change.

I’d go with the extra cleanse from Glenda

Which of these gets the most use from you in war attacks? I think Glenda would be a great dupe to have for wars. Defense down is really good to have against Mythic titans, so having 2 Isarnias might be good in that situation. You don’t need another Richard unless you use him on offense. I would not max Thorne. I’ve had mine sitting at 1/1 for 2 years.

Hmm, I would say Glenda. She does many things and hits decently, as you well know.
But I never leveled any 5* dupe (the only dupes I ever leveled were a 2nd cRigard and Gullin). So, maybe go for deversity and give Thorne a try…
In the poll I voted for Glenda, but I would probably do Thorne

FYI I started working on Glenda.