Monster and Raid chests: what to expect? 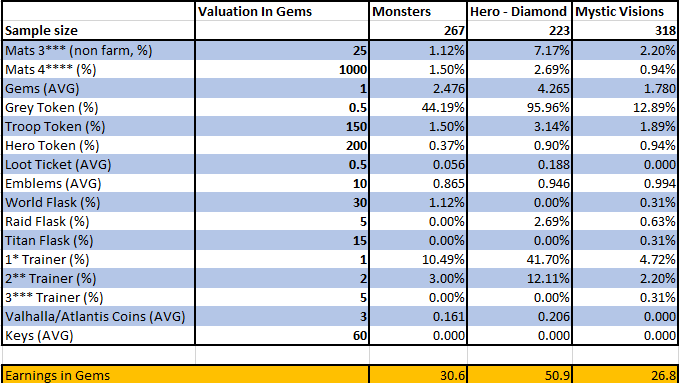 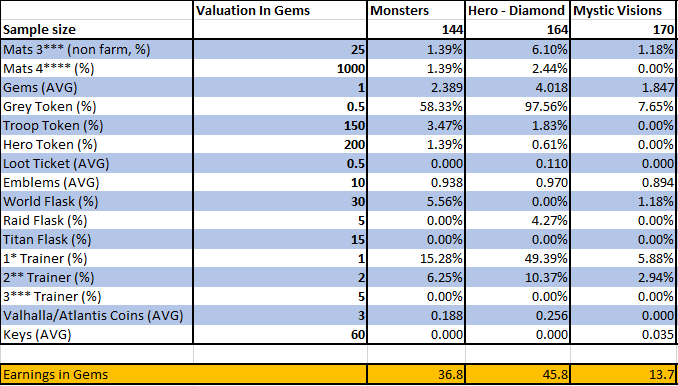 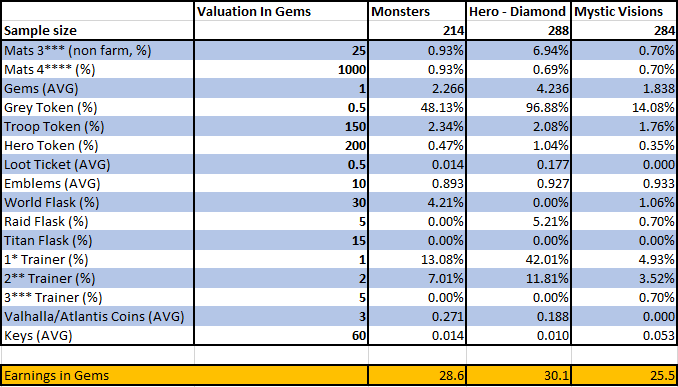 Overall loot seems not to be affected over time, but for the inclusion of keys. Only significative changes are a slight increase in coins being given by the monster chests and also what seems to be a huge decrease in chance of 4* AM from diamond chests. In case this is true it would be a bummer. Will continue tracking my data to see if this trends continues.

It also must be noted that I gave an arbitrary valuation of items considering my own opinion, and the ham, iron were not included. You can see that mystic visions are very valuable and chests also are, so I recommend filling as many chests as possible.

Thanks a lot for these data.

The drop has to be kept an eye on. With around 200-300 chests there still is a little bit of variability possible.

Although i do think that with inventing valor pass and two “free” 4* mats it wouldnt surprise me if the “overall” chance for them was lowered to exactly keep everything as it was.

Thanks @Enni and @Artamiss. I agree, it is concerning but variability is high is this small amount of samples (because of the low probability of getting one we need bigger sample sizes).
Anyway, I will keep an eye on and I hope I am wrong, but it would be such a ■■■■ move to reduce the chance of mats in a hidden way to compensate for mats that we must buy now… Hopefully it is just small sample size!

Congratulations on the information. Entering it is clear that the% drop of the items of ascension 4 * have declined considerably in the last months, of this I am totally sure. I have always been very logical and very observant in detail and I can guarantee with all the letters: THE FALL OF THE ASCENSION ITEMS 4 * DROPPED DOWN DRASTICALLY. This made the game boring and tiring.

Thank you for sharing. Personally I feel like my drop rate for 3* or 4* mats are still below your numbers… I rarely got those mats from chest. The last time I have it was from Titan chest - and i’m talking about a 3* one. Maybe Hero chest gave me 3* ascension mats 2-3 months ago. Last 4* mats also came from Titan chest.

Thanks for this. However, we seem to fail to integrate in this statistics of yours the other common sources of unfarmable ascension materials as they may come from regular and rare titan battles, titan chests, raid tourneys (which has already been live for more than a year already), elemental chests, summons chests from AR (which has been running for almost 2 years), etc. We would be able to have a more comprehensive outlook if those other project of yours are in one major post.

@Ultra thanks for the comment. Maybe I will try to integrate everything in a post once I have time, but that will have to wait at least 40 days, as I am preparing for my Ph.D. comprehensive exams now and do not want to spend time on doing something else.
Some of the projects you mentioned are not ran by me though (titan loot, chests from AR) but I may be able to include those stats in what I mentioned in the future.