Loot and storage, fact or myth?

I’ve read in numerous threads that resource loot increases with storage capacity. I can find no thread which scientifically proves or debunks this notion.

Anyone have an evidence based answer on whether or not this is true?

I’m curious about this too.

Fact. Many people have tested this over time. I went through a period of levelling my storages while basically all.other variables remained static in my game. There was a significant increase kn resource gains from chests

Were these results compiled in a thread? Mathematically analyzed? I personally have not noticed any difference, however I haven’t been tracking my results.

I appreciate the reply, but I’m looking for something i can hang my hat on.

I kept records while I was doing it, but I wouldn’t be able to dig them up.
Each chest brings back a range of resource loot. The differences after a few levels of additional storage were significant and undisputable and could not be accounted for just by a skew in the randomness of the drops.

What levels are your storages at? I am near max for all, so that can be a comparison point if we share our drops for the same type of chest (e.g. diamond raid). There were a number of people who tried to track if other variables played into the loot such as player level etc. and they were all shown to not have any impact.

Feel free to hang your hat on that, or not.

I meant no offense, I have a background in math and science, so what I’m looking for is basically a spreadsheet with lots of data points.

I ask because I’m trying to determine if leveling food storage is worth the cost considering I’m skipping HL, and only plan to use the first 2 levels of AL.

I wouldn’t be able to provide metrics to show when the investment pays itself back - once you get to level 20 I would guess the advanced upgrades don’t pay themselves back in the lifespan you will have in the game, or at least not for a very long time. They are more mandatory checkpoints for building the advanced buildings.

That said, if you track a few of your next raid chests I can do the same and we can share the data here to see what sort of impact it has

Sounds reasonable, thanks for offer of data. I’ll post again in a couple days when I have a handful of data points.

May the RNG shower her graces upon thee.

I have everything maxed, so I can no longer test. But it is absolutely proven that your storage level have an effect on ham/iron received. However, I’m not sure if that has been re checked on advanced storages or just on the first 20 levels.

Fact. It is my experience that my ham rewards have certainly increased with the levelling of the storages. Especially 15-20. In any event, I believe this issue was largely settled in this thread:

I think there have been a few chest loot data collection projects started and possibly still continuing. They probably don’t collect storage capacity as well that I know of. The original analysis pointing to storage capacity and raid chest resources being linked was done long before adv buildings existed. Being a lazy bastard I’ll leave searching the forums as an exercise for the less-lazy

Just from observation you can make a fair statement that the more storage you have the more ham and iron you get in your chest rewards. If is not that, the only option is that is based on your level.

Don’t believe they are directly related, however, as you advance in level you will fight stronger enemies and therefore will get better rewards (loot). Also as you progress you will have upgraded your Stronghold and other buildings (Farms, Mines, Forges and Storage). So both are discrete functions of your progress/(level.)

Well, OP clearly states that he wants mathematical facts based on data. If you don’t have it but only have that gut feeling of affirmation (most do; me, included), then let those who have those info post it here.

At this point, let us assume it is a myth then, until some mathematical, statistical data are established to make it to a fact then.

Just create a new dummy account, and fill a few monster chests with your food and iron storage at lvl 1 instead of their current level. You should get far less iron and food then your current account.

I’ve been in diamond awhile. After getting one adv food storage maxed I neglected the others while builders were busy doing other things

This is anecdotal, but it supports the hypothesis.

I keep track of chest loot, but I haven’t kept track of building levels, so I can’t correlate the two.

I will say, I have not kept or looked at any stats regarding this.

Personally, the only thing I’ve seen that constantly affects how much ham/iron I get from chests is what arena I’m in for the raid chests. In Diamond, I usually get about 200k ham and 180k iron. Otherwise, I tend to see a huge fluctuation from monster chest to monster chest, and even from titan to titan.

There are several factors to consider, I think. Raid chests may be affected by tiers (from bronze arena to diamond). Also titan chests, according to the loot tiers and/or number of stars.
Maybe the most “neutral” is monsters chest. And it seems to include a large RNG factor just like many other features in the game.
In the next pic you can see the total amount of ham and iron I can hold, with various levels of stores, from classic +20 to few advanced +10.
To those who claim all this “is a fact”, how can a 240% variation can be explained??? Here are two recent regular monsters chests: 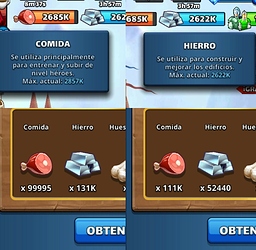 It’s storage related. I had a second account that was FTP and so focused on storage and was getting much higher raid chest rewards than my main account at the same level.

Monster chests also benefit, but I see vastly higher variations with it. Yesterday I got sub-50k food and iron from a monster chest. I get 200k each from raid chests nearly every time. (Adv iron 10/7, adv food 9/4/2).

You can start a project to get data points, but you’re going to need to track a LOT of information in order to eliminate other potential causes.

I have recorded results from 4 diamond raid chests. Results have some variance but not a huge amount:

as you advance in level you will fight stronger enemies and therefore will get better rewards (loot).

Err…nope, Unlike many other games, not so much in E&P.

Map stages — no except for ham/iron/xp or at least not after you get past S1P8 or perhaps S1P12. (If you care about farmable 3* mats)

Titans — yes by loot tier which is from grade and titan stars, more from titan stars. That’s the one real case for this.