🐼 Liu Bei – 5* Nature / Green from War of the Three Kingdoms

This thread is for discussing strategy related to Liu Bei, as well as your thoughts on him. 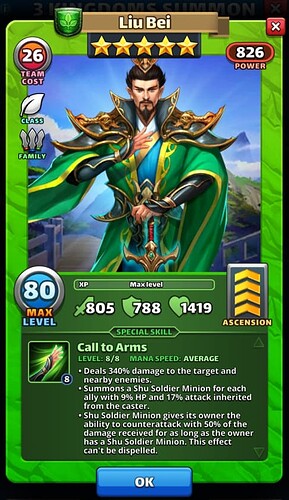 What do you think of Liu Bei ?

This thread is for thoughts and discussion on Liu Bei.

Based on preferences Forum members have expressed, please try to stick mainly to Liu Bei and not wander off topic too much to other heroes.

*NOTE: Summon Results posted without any commentary/feedback at all should be flagged as Off Topic and removed, based on preferences expressed by the Forum community. Please include some comments about what you think of Liu Bei when posting Summon Results. In addition to opinions about Liu Bei, you are also encouraged to include how many Summons it took before receiving Liu Bei (or how many Summons you’ve done without receiving Liu Bei), so other players are presented with realistic experiences of the rarity of Legendary Event Hero.

Is Liu Bei worth Summoning For?

How many copies of Liu Bei would be useful to keep & Level?

What do you think Liu Bei’s Primary Purpose is?

What do you think of Liu Bei compared to other Heroes?

Is Liu Bei worth giving Druid Emblems to?

In Defence, where do you think Liu Bei is best used?

How do you think Liu Bei is best used?

Why is liu bei’s portal image so small lol

Well he does 340% to three, which by itself makes him one of the hardest-hitting hit-3 heroes in the game. Plus the small heal from the minions (a minion is essentially a small health boost) and counter-attack… he’s an excellent hero even with just 50% counter-attack.

IF he were fast but he’s not

His minions have low HP. Pulled him today, will level and see how good he is 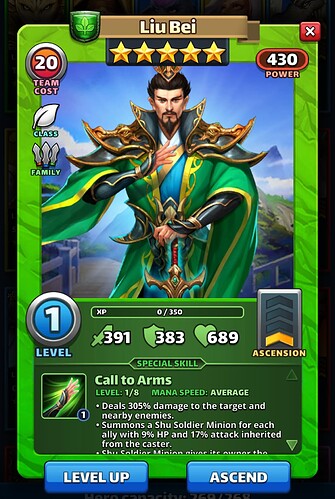 Last portal gave me Guan Yu and this one gave me Liu Bei. The game is trolling me with green heroes but no red ones. Guess I will give Liu Bei the tonics just because I have 3000 druid emblems and he looks promissing on a green stack. 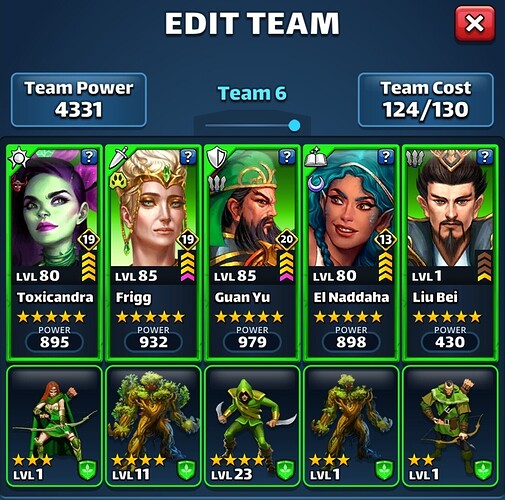 I called them Slimy minions in my Wo3K hero descriptions on my channel !

Guan Yu + Liu Bei at the same speed will do approximately 730% damage to 3 opponents. And Liu Bei’s a druid so only needs a level 11 mana troop with the +4% mana node to fire in 9

I think Liu Bei is good, but just not on par with most of the new heroes coming out. I think a small buff to either 1.) how much damage he hits for, 2.) how strong his minions are, or 3.) How much he counter attacks for. As is, he doesnt hit very hard for an average speed hero, his minions only have 9hp, which seems way to low, and 50% counter attack just doesnt do enough.

I like Liu Bei alot, I was going to LB Guan Yu, but decided to wait until Liu Bei is ascended. I run Guan Yu, ArielC, Liu Bei, Diao Chan, Quenell

I’m also deciding on ascending between Khonshu and Lu Bu … Woudl be nice to have 4 members of W3K heroes on one team getting that small mana boost.

What is the best emblem path for him? Guessing attack / health (health for minion life?)

Yes, attack and health because of the minion.

The OP is now adjusted with the June balance changes.

What do you guys think of him now after the balance and thus his buff?

I fought a team with a W defense that had Mother North - Zhuge Liang - ??? - Liu Bei - Pengi and it was a giant PITA to kill. Both Zhuge and Liu were over 1250 defense (full shield path, I assume). It took me three attempts to kill them… their defense and health were ridiculous and the minions are a huge PITA.

Just limit broke El Naddaha, and am currently leveling Fogg, have the tonics for Liu as well.