I got all the way to level 15 on Rare. My 3* fully ascended and leveled team was Jahangir, GanJu, Greymane, Belith, Renfeld, but not that order. Renfeld with 5 emblems, the rest except Jahangir (who has no emblems) with 6 emblems.

I only have one Epic hero, Scarlett. But not allowed on the Rare level. Bomb attacks? bzzzzt Verboten! My cadre of one 4* and the rest 3* Troops. Can’t use them either. I’d been dumping every troop found or summoned into upgrades. So I did some grinding on the map to scrounge up a selection of 2* troops (except 1* red and still haven’t been given any new yellow)

The 14 levels weren’t too difficult. I had to keep crafting a ton of the basic healing potions (20 of them can go further than 5 better ones) basic mana and basic antidotes. 10 each vs 5. Also axe attacks. IIRc for about the first half of the stages I didn’t have to use any battle items. The boards were good with plenty of green for Belith. I did burn 75 gems a couple of times in the second half to finish off the bosses.

But 15? Forget it. I tried several times, wasted another 75 gems once. Green was practically nonexistent, or they’d dogpile Belith to take her out first thing. I tried hitting the bosses with all five axe attacks right away, which would knock their health down quite a bit.

But then every time, the one that casts the total invulnerability would do that and it would give me no green for Belith, or she’d be gone. Utterly fruitless pummeling until the invulnerability would run out (or if it’d give me green and Belith was still around to dispel) and I could get just one or two hits in before Mr. Invulnerable was recharged to cast it again. What made it worse was one of the bosses apparently had some continuous health recharge spell for the team so even when I did get them beat down around 50%, once they started tossing spells it was me defeated with the bosses back to full health.

If I’d had a full slate of fully leveled up 2* troops and at least one other hero with dispel like Belith the 15th stage may have been beatable with the limits on heroes, troops, and battle items.

What was really irritating, mainly because of the lack of creativity, was the monsters with reflection were ONLY BLUE. Jeeze, how about some variety? Make the reflection ones different color each wave. But nope, blue, every stage and almost every level.

I also tried the other two levels. Got to the 4th on the middle before hitting the wall. Just did the first stage on the highest. My “reward”? ONE summon token. I would’ve received the same just for doing the first Rare stage and no more, and saved a bunch of gems. That’s all I did on a couple others of these events for the same reward.

Make sure you use 5 bomb attacks from 10-15.
I used to be able to do all difficult levels 1-10. This time I only attempted Epic. I did one each of the other two for the summons token.
On legendary use dragon attacks. It halves their hp straightaway. Focus all your attacks on whomever is most dangerous heals/steals/counters first.
PROTEUS is very handy.

@SpaceViking1971 It helps to space out the axes from time to time and the color reflection is with the event theme. I usually throw axes or bombs (depending on the difficulty) on the last turn to reset the debuff duration. For Avalon, stage 15 rare, on my main I stacked 2 green, 2 red, and one dark. I run no healers on my main as I only got the two three star vanilla healers in the past couple months so I am used to playing without them. My alt I ran Hawkmoon as I do not have Belith on that profile yet.

Aside from axes what items did you take?

It’s not the game’s fault you attacked using Greymane. You can try reading the threads and finding out what’s going on.

I would’ve received the same just for doing the first Rare stage and no more, and saved a bunch of gems.

True. Or maybe not. Trying to beat more stages may result in some event coins. Besides, the best way to fill the monster chest during events is to play the 3rd mission over and over again. Nice loot, decent number of monsters and it cost only 1 WE. And like @DracoLovesRi already said, you should read more about challenges. Watch some videos too on YT. You will figure out in time, I suppose.

Take a look here for some more information about the challenge events. For instance, you will see that each different challenge has a specific reflected color - there’s one challenge for each color. They are monthly, so get used to them. And they are called challenge events for a reason - they are a great source of valuable items, once you are able to complete them.

(Note: all of the challenge events are being “remodeled.” Avalon was the first to be updated - the information on that link will be updated for each future event as it becomes available.)

Battle items and color stacking. 60% of the time, it works every time.

Yeah that’s definitely pretty badass, which stage epic or legendary? In either case Proteus is already a glass canon type, so to not have him maxed taking him to Avalon Bosses that’s bold AF! Kudos @Sernarok

It was Legendary level.

The rest of the levels I finished without him, but now that I leveled him he will be part of my events team for sure.

Legendary 15 - using carpet bomb technique - 5 expensive Bombs and Dragon attacks (not shown because I used them all).

Even so they all got off at least one special. And I lost Kingston before the end. 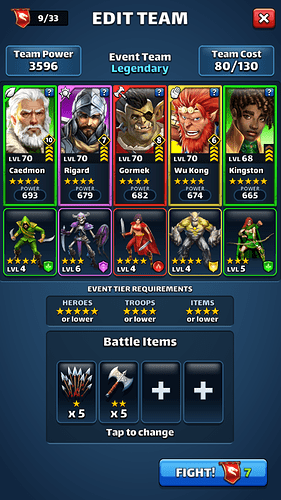 This time I wasn’t able to beat the last legendary stage with vanilla epics. Attempted 3 times. No luck.

My first time doing Epic and Legendary and I tried 3 or 4 times on Legendary. Tried Wu Kong to get his extra Damage yet he seemed to make it worse for me, because Proteus would miss ALL 3 Bosses.
I eventually switched out Wu Kong for my 3/60 Proteus, and finally did it

The first times, I think I tried more offensive rather than defensive,because I wanted to sail through as fast as possible but then I switched to this slower method and it worked out for me. I think my 3/60 Proteus died but he was the only one.

Edit:
And I refuse to redo these for higher scores so whatever LB position I get I am happy with.
Last Avalon I didn’t even have a 4* Roster to do Epic, so I am happy I have done Epic + Legendary with only those 4* Heroes.

Yeah, no prob with Proto, but I tried with regular epics only and surrendered 3 consecutive times.

Colen died 3 times. Somehow the ai targeted him all the time. I had the same team with Tibs instead of Brienne before, but was killed with different itemsets early when the bosses were only half down.

Here’s a clip of it:

Nice!! Wow a chest I totally forgot about them haven’t seen one yet. cleared rare epic only two more stages till I clear legendary.

I had 2 chests in 1 match today and also yesterday, that had never happened to me previously in events. Rare stage 3 both times. 1st and 2nd wave

i cannot get past legendary final. help!

Show the forum your 4*-5* roster, we’ll give you lots of pointers. First of all, ditch the rainbow team and stack colors. Do you have Wilbur, Falcon, Hel, or Proteus?

Here is what I used with items to finally pass Legendary Stage 15. Though Jean-Francois WAS at Level 3/69 at time of battle.

I spent 175 gems to continue twice. Used mana for BT and costumed Brienne to keep life going and Defense Down for as long as possible. The Red tile distribution was pretty average for my fight. Neither vastly favorable nor vastly unfavorable.

Jean-Francois’ 94% defense against Ice was VERY important against Arthur’s special. The 4-red Stack was critical in taking out Lake Lady early. I used Dragon bombs to dispel the sword minions in case LotL managed to get her special off. Thankfully, it wasn’t too much before a combination of BT’s Attack Boost, Brienne’s Defense Down, and Guardian Falcon’s Elemental Defense Down took her out in the first 4 minutes.

Surprisingly enough, Guin was actually the weakest link even though as a defensive tank in raids and wars, she’s s real b…I mean, pain in my bottom. Still. Surprised and satisfied that I could finish all three tiers of this Challenge for the first time ever.