Is Leonidas worth darts? :/

I really don’t want to give him darts but I’m at the point where I might just do it. I have 11 darts, and yellow is my weakest color. Everyone is using stupid purple tanks… below is my 80’s. What do you think, take Leo to 80 or save the darts? He’s been at 70 for like 6 months

My main concern is that he’s average speed and I don’t have lvl23mana troop, so it will take 4 matches of 3 to charge him which at that point his mana cut will be pretty useless wont it? Like the defender already charged their special and smoked me… and it’s not like he hits very hard. His defense stats aren’t very sturdy, my Sabina+19 has defense and hp like Leo will at 80 and she still gets killed before she charges all the time 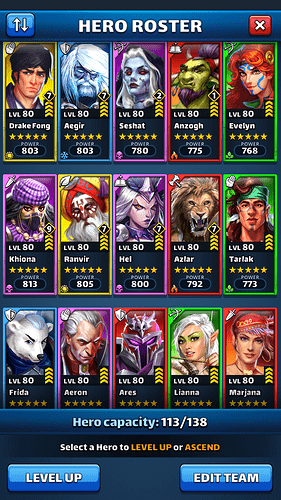 If you have 11 darts and no other 5* yellow I don’t see why not. He’s not a bad hero, and even if you get another 5* yellow you’re only going to be waiting on 1 dart. I was in a similar position to you with excess darts and I ascended him, I always use him when stacking yellow.

He was for me. Him and justice are my only 5* yellows. Better than holding them forever and not using them

In my honest opinion, and I have a few Yellow 5* including Leonidas- yes I would max him and give him the darts. You will not be disappointed

I like Leo.
I still use him on each war and now also did start to give him some emblems.

On my alt account I’m now in the situation, that I could max one yellow and I need to decide between vivica and Leo…
Currently I tend to leo as I got several healer’s already maxed ( Ariel, areon, rigard, Sabina, boldtusk and melendor)

I’d ascend vivica immediately. I wouldn’t even ask anybody

If tc20 gave me vivica or Joon, they’d go straight to 80. Which is why I’m so hesitant to give Leo darts. I know he will improve my roster but as soon as he gets darts I’ll find Joon or something, it always works that way

I know that feeling.
I’m still kind of glad, that I didn’t get Lianna on my alt account yet as I was worried she gonna show up directly after I did spend the tonic on Elkanen and Kadilen.

But now she could show up there, as I don’t have any good green to work on since peters is finished now.

I have both Viv and Leo ascended. So far the only use Ive found for Viv is a corner healer in healing wars

While she does that job well, that’s all I use her for due to her slow speed.

On the flip side, Leo was my first yellow 5* I ascended. I find him much more versatile as I use him in every war and every purple titan. I stack him with my Jackal and Drake and he does well. I definitely don’t regret giving him the darts as I find his mana drain particularly useful in wars.

I use Leo a lot. That 40% mana cut is awesome, and has saved my bacon often

I love Leo and prefer him over Joon ever since I got a mana troop to 23 and he charges in 3 matches of 3. I only use Joon in a yellow stack but I will bring Leo along both in a yellow stack and to other fights in a utility role supporting the strong color. Plenty of times he has been the last man standing and won a fight 1v1 or 1v2 as he deals damage, heals, cuts mana. Ghost tiles and repeat

Imo, yes he is because he is Chao with a greater mana cut, and heal based on damage. Once I get enough darts for him, he will be one of my mains.

If f2p or c2p, probably! But if you are worried some one better will turn up, wait until you have 12 darts and that is covered

You’ll certainly find a use for him so you won’t regret ascending him. But if you’re going to do many pulls for a better yellow then waiting is not the worst option either. With the team you already have, you can kick @ss anyway