This thread is for discussing whether Waterpipe is well-balanced, or whether you think he needs a buff or nerf.

This thread is NOT for general discussion of Strategy or Summons related to Waterpipe. For that, please see: 🏆 Waterpipe – 5* Ice / Blue from Covenant of Champions

In short, to neaten the forum and to give players and outlet for their thoughts on his balance without bogging down the rest of the forum or the other Waterpipe thread.

I think this discussion will very soon be irrelevant for top players as waterpipe will disappear from being the main tank as soon as the Lunar New Year starts.
The only ones left to deal with waterpipe will be the mid level players where Lunar heroes are less common and people lack alternatives for a good tank if they have one. But since waterpipe is a very rare tank to start with I doubt there will be much of a problem.

Sure, the whaliest of whales of course will got 6x of the Lunar 5* to have for each war team…but these will be the case in like TOP 10 alliances. For the rest of us mortals, she’ll still be a pain.

There are some counters there like Poseidon, Bera, Devana, Vela (minion immunity)…charge heroes, passive mana generators…nonetheless the most annoying thing is her revival. If only my pipes under the bathtub could revive as well…

True, the fighter class is the most annoying thing when facing her. Give her minions only to nearby and change her class to something different and we are fine!

I don’t want / Like Nerf once it’s released. Once upon a time lots of moaning when we fight against Telluria/GM/Vela. After the Nerf totally collapsed. But now lots of oP heroes released and they are much better than Original Telluria/Vela . No need to Nerf any players just play what we have. Players who invested will suffer . I don’t have him but i will support other spenders .

If M&M needs a nerf Waterpipe needs a nerf too. Balance changes are part of game. Don’t release any hero who can completely block heroes from using special skill.

You already nerfed this hero before release and now you want another nerf. How many nerfs you need? When is Anne’s nerf coming? How about Ogima? Oh and another wave for M&M?

Another tap on the wrist ? Like it was for MnM ?

she doesn’t need a nerf, 12% hp minions is nothing. they die with tiles.
she doesn’t heal or anything, max she can do against a good team is to stall one or two attacks max.

i don’t have her and like most players i dislike losing but we need to have a fair view on her. i am very glad we are seeing other colours than purple finally and wish for more options to come.

if we keep nerfing anything new we will be stuck on tjis stale meta forever. let’s hope we can learn from history

I love mine on offense but on defense shes not a huge problem. Just bring some ninjas, magic, or styx heroes and she is easily delt with. Well balanced in my opinion. She is very strong but has obvious and effective counters.

True, the fighter class is the most annoying thing when facing her. Give her minions only to nearby and change her class to something different and we are fine!

How about calling her Lady of the lake? Just a way out there name, I know, but heck why not?

Noooo, do not nerf Waterpipe

If you nerf her then you need to nerf:
C G. Panther
Anne
Jove
Ogima
New Ninjas
Alucard
And all new heroes

She is not such a big deal in defense. I even do not use mine because she is useless against sooooo many heroes.
Please do not neef her, she does not even heals to consider her as M&M.

If this post release nerf nonsense continue, I don’t think there will be many players left to play this game. Waterpipe minions are nowhere near as buffy as the rest, arrow barrage removes them at once unlike with other heroes; what will break the game is not the OP heroes but the sore loosers who can’t seem to find way around it but to complain and complain until finally these heroes are rendered useless; if you’re not happy, just delete the game and find something else that suits you better! Getting really flustered around these posts which dominate the forum lately! 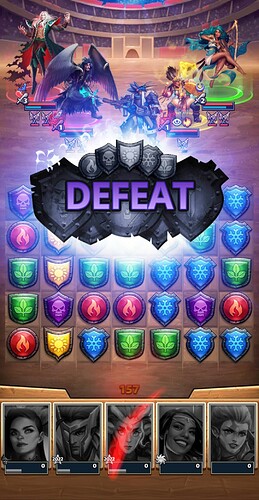 I own a maxed Waterpipe and voted she needs a nerf.

I’m against stupid mechanics that completely prevent people from doing anything. Whether it’s out of control CC in World of Warcraft, or removing mana in E&P. Heroes like C Alassie and Waterpipe have no place in the game as they remove the ability for the opponent to even play their own heroes. That’s the worst kind of game design and it needs to be defenestrated.

Waterpipe is currently useless on offense (the defending team charges anyway) and is broken on defense. Maybe change her to be be like LOTL, giving minions only to herself and the flanks, and give her some more power that is useful when using her on offense.

This post is about balance discussion and it’s not a player created thread asking for a nerf. Everyone has freedom for their opinion. If you think waterpipe is balanced cast your vote and add your comment. It’s SG’s decision to nerf/buff heroes.

Note: there is a balance discussion thread created for zhuge liang. Everyone said he is weak but SG nerfed him

Stop killing this game. You do the same to Alasie, Xnol and so much other heroes. She is not OP

Please explain how you win when your opening board does not have enough tiles to activate your heroes, and she goes off.

Have you even tried appropriate counters to waterpipe? 2 of the 3 current featured ninjas would be really good against her. Most of the styx and magic heroes are awesome against her. Even niche heroes like posideon, and baldur (provided you cast them before waterpipes goes off) are fairly effective against her.

With the right team set up she is tile dump…if anything I’d ike to see her buffed.

If you do not have tiles you can lose against S1 5* heroes or even 4* heroes. She is not OP damn. Every hero can be killed with 3 tiles. You were reason why they even nerfed Alasie C. You will not do the same to Waterpipe. Just deal with that