I’m sure he/she did it legit, but its like 20-25 thousand above second place… must have been something ridiculous like 12 move combo off the first move. It’s not like there is alot of wiggle room at the top.

And I cant imagine 23-24 hrs replaying. There is a good chance my wife would literally kill me if I did that.

LOL nice to know I am not alone out here! Thanks for the reply. I didn’t get Proteus either or a coupe of other heavy hitters. I keep trying. Yeah I don’t know how they win tht high either. Mr. SPock is talking about diamond level have you seen that or do you know how to access that? I am not clear on it I did write him back.Nice to meet you and thank you for your comments. I am really addicted to this game haven’t missed a day since I found it LOL. Have fun, win lots and thanks again, Meg

Thanks yeah sorry was my first time posting and I had a lot of questions. Wil try to keep them short from now on. What is F2P? Thanks for your feedback!

Thanks for the reply. I just can’t figure out how to win those last really hard levels in the quests. If all your heroes are wiped out you have to either quit or pay to play. There have been several that seem absolutely unwindable to me. I bought more gems to keep my heroes comingback but it got ridiculous so I stopped. Tried again the next day same thing. I have great heroes that are ascended fully and with the talent grid. Pretty much all levels. How do you compete and win in those last stages without spending gems?Thanks everyone, sincerely! Lightbender11

Not sure what heroes you have been taking but the obvious responses are:

Rare milestone is 10k instead of 5k

F2P = Free to Play (never spend their money in this game)

. I just can’t figure out how to win those last really hard levels in the quests

What heroes did you use?

This is an abbreviation for “Free to play”: players that don’t spend in the game.

Mr. SPock is talking about diamond level have you seen that or do you know how to access that?

He meant a diamond arena in raids. It starts from 2400 cups.

The main point was actually about the fact that you don’t need to spend continuously to make a progress in this game.

Lol thank you for clarifying:)

And now he’s going to ask “what are cups?” Which are the trophies ratings (why do people call them cups?) you get for winning raids.

why do people call them cups?

After winning lots of those trophies, it’ll only take 2 cups of coffee to lose even more.

why do people call them cups

Apparently, you can use it to drink champagne.

If you don’t have Proteus or Hel for the mana freeze, mana cutters such as Li Xiu, Chao or Neith, mana slowing heroes such as Little John, or silencers (Miki, Peters) do the same job: stopping the blighters firing off their annoying heals. You can only take 5 (?) time stops so you need something in between to keep them quiet while your damage dealers whittle them down.

As for the damage dealing, the best heroes in the game won’t do it if they don’t work well together, or if they aren’t the most suitable against those particular bosses. Can we ask what your team line-up was? It might only take a small tweak to hit the winning button. Obviously too late for this Avalon but the principle (though not the exact team selection, of course) holds good for all events.

had a pretty good event 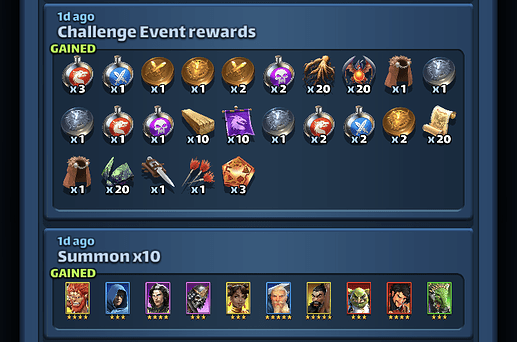 Avalon is also IMO the hardest one with lady and guin healing and mana cutting like crazy.

After something like 45 minutes having to die up then trying again and again and still not winning over and over and over plus buying more gems to keep my game alive ~ I lost all that money in a game that seems to not be winnable at all.

Firstly I’d to say that I am sorry you feel you need to keep buying gems to keep playing when it’s ment to be fun.

But I would say this is a good indication that your literally not strong enough to win that match to begin with.

I personally never buy gems to continue a match and would rather give up. Having said that I complete and win every event on my main acc and my other acc’s just have to miss out if they can’t beat a stage.

Why spend money on this, it’s just a plain outright waste of money.

NOTE!
This game is designed to take time and be a totally utter grind without any gain or benefit to you in real life other than wasting/killing time.

If there is something you can’t do or achieve then just be patient and try again at a later date but spending money on it will not gain you any benefits and honestly the rewards are simply not worth spending money to complete matches.

If I may suggest to you to try changing your train of thought when it comes to winning matches and just accept your not strong enough at the time and try again later as this will not only save you money and annoy you far less but also make you a better and happier player in the long run.

My alt acc’s run with nearly no spend g at all and can complete rare and epic event, they don’t have enough 5 stars to complete. My trophies are at around 2200 cups and that’s without even doing raids as I’m over wasting my time on them but it at least gives an indication of what I have achieved with hardly any spending and never ever waste gems on trying to complete a match, that just silly in my eyes.

Guys is there any thread or post on how to play the best way to get points? Every event I fail to get into 10k ranks by a few hundred points…

I mean I know less moves = more points, but when do u use items, when do u fire special attacks? What about time / hero life? Do they matter or is it mostly about moves?

Edit: what about mana potions usage? What about emblems? Is it possible to reach 10k or 1k on rare without emblems on heros?