They maybe compensating keys in the MV though. I have been getting keys there left and right

There is that. The other day I got 5 keys from a rare chest (along with a EHT which ended up being Gunnar… so there’s that as well). Don’t agree with the changes without either extra keys or premium loot (aethers). 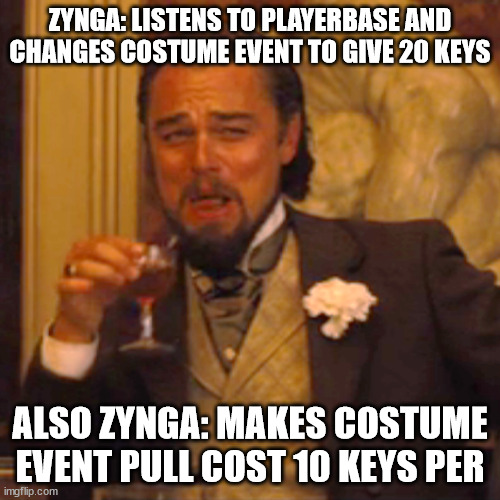 I can see this happening

this quest and v2 costume is just a big scam

they just want to make more money again and again from an outdated summon gate
you need to lvl up the hero + 2 costumes
more effort but hero can be used only once on on wars, mythic etc… only in tower you can use heroe and costume separately

they should just release them as brand new heroes on a recent summon gates,its such a big scam to force players wasting money on old gates like atlantis

hahaha this is what i also was thinking, you know there will always be a catch to them doing something FOR the players lol

Isn’t it take-two or something?

will these costumes be available when the costume portal opens next on 11 july?

Zynga is the one of 2 penultimate holding companies (there is a wholly owned TT subsidiary that serves as the active operational company, I think)
Brand name Zynga for mobile gaming. Zynga has been delisted.

SGG is one of the many 100% owned subsidiaries managed by Zynga.

So Zynga is overall developer. SGG is the “minion” developer.

Listed in OP : Obakan and Vivica. Per beta testing.

At least one costume will be released.

Which one ? Nobody knows for sure.

NOTE: Please do not, under any circumstances, share IMAGES OR VIDEOS from Beta in this or any public Forum thread. Violations can cause players to lose their Beta accounts, or threads to be closed down. This thread is to provide early insights and discussion on the new secondary costumes for Season 1 heroes. Don’t get too attached Details from Beta, especially brand-new Beta content, don’t tend to be very reliable for actual release. It’s incredibly common that features are changed durin…

they’re gonna make us wait right till the end for Quintus and Domitia aren’t they?

I think so. Zynga will milk revenue streams as long as they can.

At this point it is highly unlikely that we will see these costumes in the July 11 as Version 50 most likely will not be released next week.

So it looks like these will be only released on September 5th.

This is partially good news at least as it may give time for them to add in testing for further costumes of the epic & rare variety so there is a reason to use free keys.

And now we can accumulate more keys till next costume chamber when these new costumes will arrive.

Version 49 was released 24 days ago (according to the release note thread), and the pattern seems to be one version each month. I would think version 50 would be out next week.

I am expecting at least 1 more Beta build of V50.
Maybe on next Monday.

At least I will accumulate keys waiting until more 4* secondary costumes arrive. And maybe 3*? No problem with waiting, I don’t want Klaern.

I am really hoping for new 3-4 star costumes (I still not have all of them, but diluting the options will mean less chance for a dupe)

I really want to wait with using my keys until they add ALL S1 2nd costumes and with using my Atlantis coins until they add ALL costumes. Somehow I’m afraid that they will make us wait for a very long time… We still haven’t heard about more rare and epic costumes for S2. Or worse if they’re going to release costumes like for 50-60% of heroes only… That would be the worst… All or none.