This thread is to provide early insights and discussion on the initial release of the Tower of Styx Event .

Tower of Styx is a new event which is similar to Ninja Tower or Tower of Magic, so it has got two questlines:

@birksg has helped and he createad a table of the disabled hero classes in current Beta: 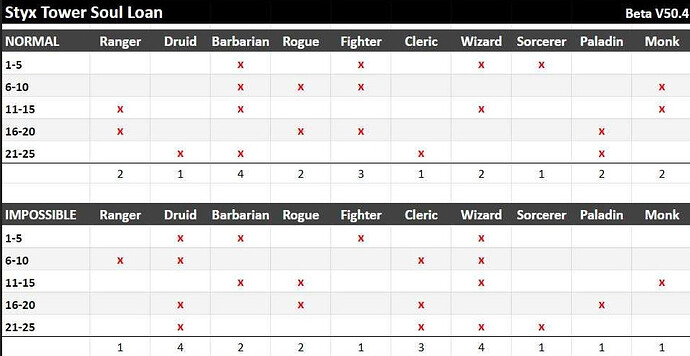 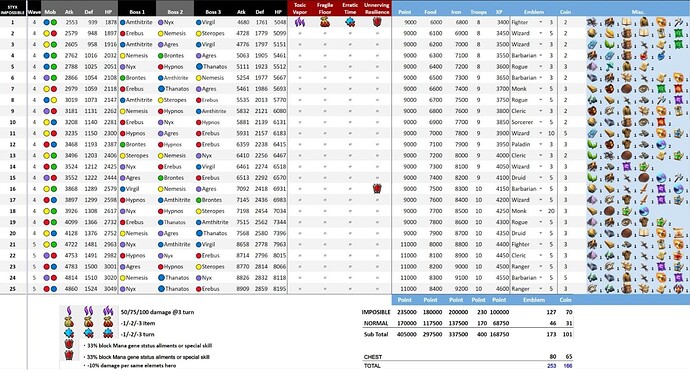 Thanks @birksg for creating these charts !

Blessings offered after each fifth floor on Normal and Impossible questline:

Exact wording of the Event Rules:

The goal of the Tower of Styx is to climb down the Tower as close to the underworld as possible with the best possible score. Players receive exclusive rewards based on their ranking at the end of the event.

Charon the mysterious ferryman of the river Styx, loans some of your Heroes’ souls as guarantee fee in exchange for letting you entering the Tower. For each 5 floors, the souls of Heroes from 3 classes are loaned, and the Heroes cannot be used in battle. However, members of the Styx family get a free pass to enter the Tower, and can always participate in the battles !

Tower of Styx stages features Soul Grasps. If you le Soul Grasp expire, it deals damage to one fo your Heroes. However, if you match the Soul Grasp in time, being released from Soul Graps boosts the health of your targeted hero instead !

Leaderborad rankings are based on the highest floor reached. If players have reached the same floor, they are ranked based on theri cumulative scores from playing each floor. The scores from Normal and Impossible floors are counted together.

The score from each stage is defined by the enemies defeated, speed of completion and the amount of Hero health left at the end of the stage. Big combos and great matches are also taken into account.

Stages cannot be replayed after completing them succesfully.

These Tower coins are the same as what you can get from other Tower events.
There is no bonus ascension material chest.

Yes, you still need to keep an eye on them, but mostly you can prevent them to cause you big harm.
Eg: By healing that hero with special skills or items, summoning minions, etc…
So that the targeting hero is not defeated.

And they do not have a lasting effects (cursing out heroes from further usage).
And if you match them, there is some benefit: HP boost of the target.

On the impossible stages I usually reached the boss level with about 200% HP on all heroes + some minions without any hero which boosts health.

So they can be very hepful especially if you match them just before they expire.

Sounds challenging. I really liking this idea for a couple of reasons. The “blocked” classes make you really think about putting a team together, that alone is a wonderful new twist. Secondly, you get enough flags to finish the tower without having to buy more, looks like the listened to our displeasure with the last two tower that made to pay to complete.

Now, not to be the naysayer, but I’m hoping they didn’t make this TOO difficult to the point where most of us will have to use gems to get more flags to complete. Finger cross this is as good as I’m expecting.

The “blocked” classes make you really think about putting a team together, that alone is a wonderful new twist

The defense flipping passive is going to cause quite a few problems and will be the other twist to gameplay. Some won’t care about it and just blast through. Some won’t notice and then quickly get wiped out.

It’s a change so I’m willing to give it a go.

So far it seemed to be easier a bit for ne compared to other towers.
If you can keep high HP for your heroes, then it goes smoothly.

But of course there are some dangerous enemy heroes who can do 2.7k+ damage even in the first half of Impossible difficulty.
Fortunately there are not much AOE enemies, and they do much less damage then Milena or some Ninjas.

The Tower only tricked me 1 time so far, when I killed by this 2.7k attack.

Since then I take a Miracle scroll with me just in case.

I needed it only once, but it is good to have a plan B is too much of ny heroes are defeated.

And as you I do not affraid if loosing my heroes. I can play more relaxed. So the floor completion times are shorter.

Also nice that no heroes will ever permanently be unusable. i’m fine with 3 classes at a time being barred, of course roster depth is important here and will be tougher for newer players/players with fewer heroes!

and really happy that we only have 25 + 25 floors, meaning it will be possible to do with free tower energy

step in the right direction for sure!

Does this mean Styx Troops are coming?

So far what I’ve read is kinda like the Easter event mixed with the normal tower event. The rotten Easter eggs has so many turns before they’ll exposed. Instead, of climbing up, it’s down. Interesting.

Yesss! So far I’m liking it.

Hey Guil, you ready to be off the bench?

What happens if you hero gets “strike out”? Can you still use it?

It would make sense since the other towers have troops.

Does look better than the the current towers i do like that there is 50 floors so free energy should be sufficient.

The locked class mechanic looks better than the curse mechanic. Especially when ive had cursed heros that were impossible to aviod due to board.

Maybe it will be a composite of existing troops:

Drop +healing. Cos Styx is all about death and underworld. Healing is pointless. Bypass is moot since death is inevitable.

Time to save tokens! Just in case. Lol

Is it blessing -15% damage reduction applies also to Soul Graps?

Your hero can just be defeated. You will always able to use it if it’s class is enabled on that stage.

At the moment I like this new tower the most.

So far no troops arrived to Beta.
But Magic troops are arrived from thin air to the live game so they will most likely added sooner or later.

Cursed heroes are the worst. Not able to use certain classes will be interesting. This is a way for people to be creative.