🧪 Early Information on Styx (a.k.a. Cyclopes) Troops [Part of The Beta Beat v50]

This thread is to provide early insights and discussion on the initial release of the Styx (a.k.a. Cyclopes) Troops .

An additional set of Epic troops have been added to each colour.

These troops (when maxed) have the below stat-distribution:

Level progression of the new troops

Here are the progression of each stat attributes compared to other troops:
Special thanks to @IgH for collecting the data and @birksg for creating this chart from it. 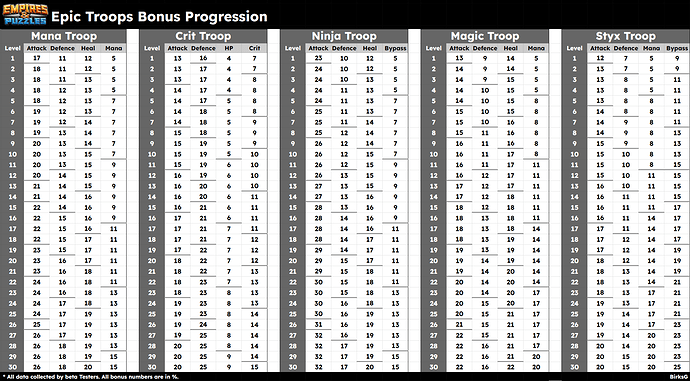 Basically this portal takes over the normal Troop portal, the same as the Seasonal Event Portal replaces the Epic Hero Portal during the Styx Tower event.

The summon costs are the same as the normal Troop Portal & you CAN use your Epic Troop Tokens in this portal.

Summon Odds of the Tower Troop Summon are

I’m having a hard time deciding which troop is best for a certain hero.
I’m neglecting my troops too much I think… And now we have another one.
Did anybody write a guide “Troops for dummies” and explained in just a few sentences which troop is the best for which hero? Or it is not so easy and can’t be simplfied to “X heroes will pair well with Y troops”.

I have over 100 troops tokens on each of my two accounts, was saving them for the Magic Tower event, now I’m contemplating if I should wait longer for Styx Tower, which may or may not feature soon enough, as well the troops stats may possibly change after testing, too many variables. What are your thoughts on the subject?

I am currently levelling a set of rainbow magic troops for my slowpokes. And defensive tanks. The 20% mana gen boost helps to shave off at least 0.5 tile mana needed to activate a hero in defence.

This means that heroes in a defence team will activate a tad quicker.

For attack, the 20% added to Costume mana bonus and emblem mana node, can drop activation by another tile. Average : from 10 to 8.

I will try for these Styx troops because they will benefit slower Ranger heroes. The 25% bypass plus Ranger 25% bypass = 50% bypass. Ninja troops give max 40% if the hero doesn’t come with in-built bypass ability.

50% is a good deal. To me, it means very highly likely. Just like C Kadilen’s 46% dodge almost always succeeds. My experience anyway.

I think this ones are effective on offence only, i don’t know if the bypass will make up for the difference in deff

People’s poll: Which troops are better?

I put a poll above to see what people think.
I voted Styx, but it has a lot of caveats.

Pro for Styx:
Mana break points happen more quickly. This might be the deciding point.
Bypass can make up for the lower attack stat and help against defense buffers
Good for a team with no defense

Pro for Magic:
You may already have them or have them leveled
Higher attack/defense
Good for a team with healers

I think the earlier mana break points is the main factor here for most players that don’t already have a full set of troops fully leveled. This means less food and less feeders. Said another way, a regular mana troop requires level 23 to get a 13% boost. Styx troops only require level 16 to get a 14% boost.
This is essentially a QOL update to increase the value of troops.

If you’re a whale, you can decide if you want another set because I can see where they might have their value.

For other players, I wouldn’t fret over which troop you get. I will be saving my ETT for Styx because I already have some Magic troops. I definitely see myself taking a few Styx troops up to 16 to round out the 4th and 5th heroes on my mono teams.

I don’t think these will change the meta or push power creep too much. Looks like a balanced update with more options. I like it.

Pro for Styx:
Mana break points happen more quickly. This might be the deciding point.
Bypass can make up for the lower attack stat and help against defense buffers
Good for a team with no defense

Also Ranger emblem class heroes benefit from the defense bypass, very high chance for that to happen then. (and certain heroes with the ability to bypass defensive buffs)

I too was saving ETT’s for Magic Troops, but now that these were introduced I would rather have these, but it’s just that we don’t know if they will change something about them and when will they be added in the game. I’m missing dark and red MTs only so those are the only ones I would be chasing anyways. I don’t spend money on troops so even for Styx Troops I couldn’t start working on green, yellow and blues because I’ve already maxed one set of regular manas to 29, and after that used pretty much every single troop I’ve gotten to Magics which are now at 13/14 (and also regular secondary manas to 11 each).

And also, I use Hulda as my main tank pretty much everywhere, so I guess she would benefit more from Magic Troops. I don’t know how much xp I have in dark troops, I haven’t used a single troop I’ve gotten ever since last Christmas.

There is a possibility too, that in a (near) future they will make an Tower Festival, that bundles atleast both Ninja and Magic Troops together, making it harder to chase for any particular troops of those.

I’m having a hard time deciding which troop is best for a certain hero.
I’m neglecting my troops too much I think… And now we have another one.
Did anybody write a guide “Troops for dummies” and explained in just a few sentences which troop is the best for which hero? Or it is not so easy and can’t be simplfied to “X heroes will pair well with Y troops”.

@Sorvina @GingerQueen
there was one by @Guvnor some time ago, but back when we only had Mana, Crit and Ninja troops + updated for Magic troops.

Stat Progression Most are familiar with the existing graphics showing the L1->L30 stat progression of the Crit & Mana troops in game. The below now also has the stat progression of the Ninja Troop and the new Magic Troops. [Updated Troop Progression] Note: Updatd to include new “magic” troops; still verifying. Best Use This is a little more conjecture & HIGHLY roster dependent so I will try to keep things pretty general. NOTE: This is mostly my opinion where there is no maths presented …

If I summarize though, reaching a mana breakpoint is #1 consideration. after that, the rest depends on whether you need more attack, defense, etc.

Crit points are often overlooked, but the crit boost is surprisingly useful.

@Ruskin505 also gives some good points re Magic vs. Styx above, as do @PlayForFun and @Quiet

The bypass for Ninja and Styx is most useful for Ranger class, as they also have a bypass bonus from their class talent. or for heroes with specific bypass in their special skill (the original two blue Ninjas come to mind).

I now need troops that allow my slower support heroes to activate faster. Bypass is not as important as higher attack, defence and healing boost for these support heroes.

I will still try for Styx heroes because they are useful for my Ranger heroes, and others with an inbuilt bypass ability.

Wizard class snipers/hitters can bypass and deal extra dmg with styx or ninjatroops. that dmg can get OP sometimes

Maybe a noob question but why only the slower Rangers and not all Rangers?

What is the difference? Imh all the Rangers will benefit but maybe I’m missing something?

I use exactly the same methodology.

You didn’t mention slow heroes, but indeed I don’t use slow heroes in regular pvp.

I am currently levelling a set of rainbow magic troops for my slowpokes. And defensive tanks. The 20% mana gen boost helps to shave off at least 0.5 tile mana needed to activate a hero in defence.

This means that heroes in a defence team will activate a tad quicker.

a few wars ago, i fought a defense with a full set of maxed wizard troops. even at just 5% over a maxed mana troop, there is a noticeable difference in the charge speed of heroes on defense.

I like the new options, BUT selecting a team to raid is becoming a real time suck. First you have to look at who your are fighting and decide what color to stack and which hero needs to die first and if you need a healer or minion makers. Now with 5 different types of troops then you have to factor which troop works best with your heroes. It’s getting pretty tedious when sometimes you just want to play mindlessly.

I already have 3 mana troops at 30/29 for each element. Magic and Styx troops are akin to “specialised” troops for me for extra support in the mana department.

It’s a real pain to max 1 troop, so I am only aiming at a rainbow set for now.

When it comes to deployment, I would assign the Styx troop to a slower ranger because slower heroes generally come with better stats. The reduced attack and defence boost would not matter as much.