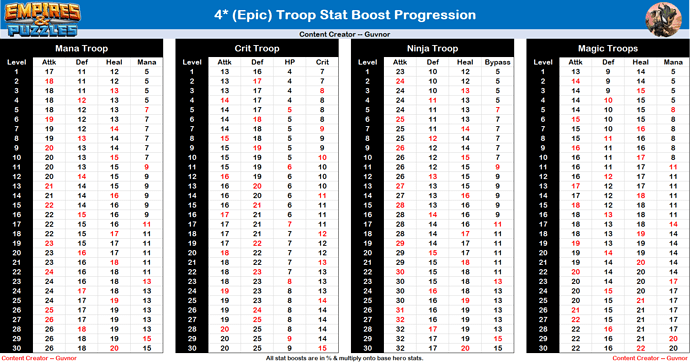 This is a little more conjecture & HIGHLY roster dependent so I will try to keep things pretty general. NOTE: This is mostly my opinion where there is no maths presented 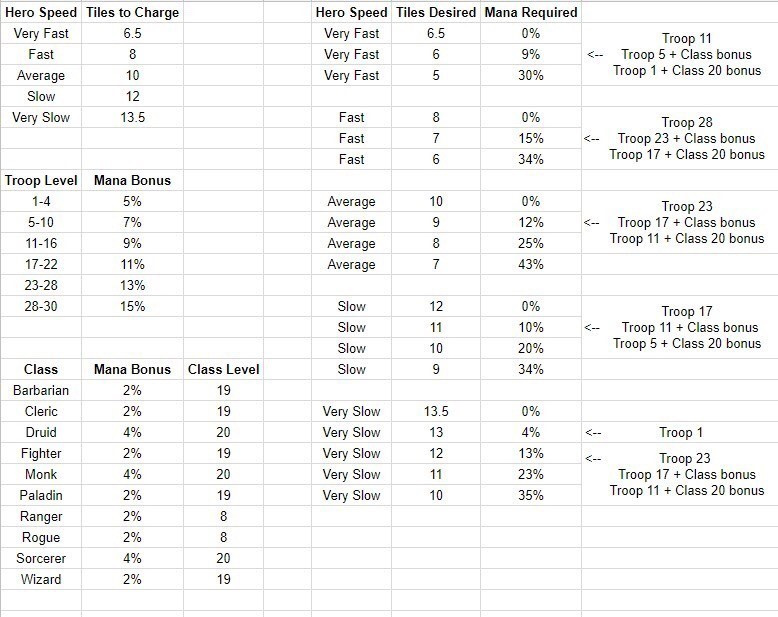 This builds on the work done by @zephyr1 on this thread: Where to find stats about stacking - #11 by zephyr1 which shows that the Crit troop is better than Mana troop in tile-dominant situations.

Shoutout to @mattp169 too for Line discussions which prompted this topic. Think he’s working on a document with some more detailed/ other scenarios too. 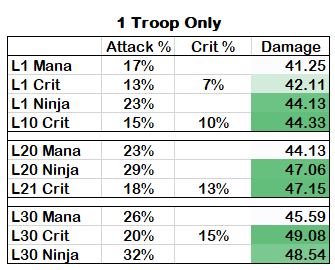 A full ranking of “best to worst” in terms of NORMAL damage dealt (Tiles & Slash Attacks): 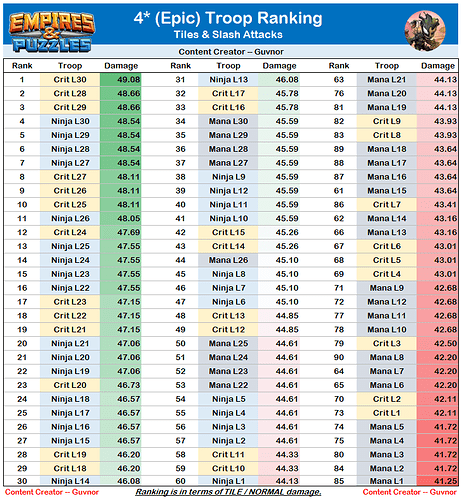 BASICALLY: what this means is, in tile damage scenario’s if you can equip & use a “higher ranked” troop, you are better off doing so…

In special skills, there is no chance for “crit” damage. So essentially the “best troop” is going to be the one which has the higher attack stat.

Choice based on my Raid Style?

As originally stated, if you can get a “Mana Break” then that is your first aim.

If your play style is PREDOMINATELY from special skills (i.e. you raid rainbow or 1-1-1-2), then the Higher Attack Stat troop is going to be the best application if you cannot get a Mana Break.

If you raid 2-2-1, 3-2, 4-1 or mono, tiles are where the majority of your damage is coming from & thus should follow the “rankings” presented above

This is where it becomes a little more (read a LOT) more subjective… Generally speaking tho, the Mana Troop is the best option for use on defences.

Many players choose to use Mana Troops on their defence for a couple reasons:

Overall, the Ninja Troop doesn’t massively impact / affect any of these decision reasons regarding troop selection on defence… There is an argument for using a Ninja Troop over a Mana Troop on defence for a “big hitting” hero, in that they will amp up the damage done, but the mana bonus is still very powerful due to Reason 1.
One exception may be a multi-hitting ranger hero as the Ninja Troop & Ranger Bonus Proc separately (E.g. Finley) thus leading to more bypasses & more damage output.

Thank you i was hoping you would do this. Still not sure if i should take a 2nd set of mana to level 17 from 11 or start working on ninja troops. I got 1 in each color.

Wow. Good for you. Out of the 18 ETTs I used yesterday, I was only able to net 1 green 4* ninja troops and an excess 4* blue mana troops. The rest are going to be feeders to my best troops.

Crit & Ninja are better than Mana

And crit troops are better than ninja troops, right?

Depends on the level of the two troops

See the ranking chart in the OP for a comparison, noting that it is focused on NORMAL damage (tiles and slash attacks).

Per the OP, ninja troops have a great synergy / application to Ranger heroes and AoE heroes where the bypass has more effect.

Yeah. I think crit troops are still a bit better. Unfortunately, in the current meta where players rely heavily on the skills of the heroes thus the need to have the mana get filled ASAP. I have maintained 2 crit troops per element and managed to level some to a certain degree. For my Telly, it is supported by a level 25 crit troop, following how uclapack did to hers. Besides, I got the nature mana troop very late and left it at level 17 still.

ninja troops have a great synergy / application to Ranger heroes

I previously mentioned that the ninja troop ideal to very fast heroes. But I will agree more on your statement that it would have great synergy with ranger heroes, preferably the fast ones since they are already fast. Only one ideal hero for that: Finley. I’ve seen this overpowered hero bypass some of my heroes even when they are under Mitsuko’s reflect, usually 1 out of 5. With this ninja troop, bypass would be more than 1 out of 5.

Ok i di d this half asleep but
https://docs.google.com/document/d/1j5RIAzozeJS4g4Jtzs1HTkY8yMxJlbDrR5o0tsQaZG4/edit?usp=sharing

My conclusion is this: When stacking colors, replacing an unleveled mana or crit troop with an unleveled ninja troop will increase average tile damage.

@Ultra very happy about 1 in each. I had been saving my coins for a few months, i had about 60 pulls.

Def going to work my blue ninja troop for finley!

One thing to consider is that crit troops don’t help specials at all. Ninja troops allow bypass for both slash and special attacks.

So everything else being equal, I’d favor the ninja troops. But not enough for me to spend gems on pulls. I still need a purple mana troop.

I did make specific mention of that fact

Ninja Troops have most benefit when equipped to a Ranger Hero (as the troop stat stacks with their talent stat) and with Damage over Area Heroes (e.g. Azlar or Isarnia) where the single cast has multiple opportunities to “bypass” defence buffs.

In special skills, there is no chance for “crit” damage. So essentially the “best troop” is going to be the one which has the higher attack stat.

Best Choice based on my Raid Style?

As originally stated, if you can get a “Mana Break” then that is your first aim.

If your play style is PREDOMINATELY from special skills (i.e. you raid rainbow or 1-1-1-2), then the Higher Attack Stat troop is going to be the best application if you cannot get a Mana Break.

If you raid 2-2-1, 3-2, 4-1 or mono, tiles are where the majority of your damage is coming from & thus should follow the “rankings” presented above

ok i know there,s another troop calculator out there in excel form. I couldn’t get it to work for me. It is probably user error

SO I made one on google sheets

READ ME The troop calculator sheet allows you to determine what the difference in average tile damage given any combination of troops. Simply use the drop down menu is COlumn B to select the troop you are using. This will work for 1 through 5...

this is what i was looking for. just did some pulls as I was keen to get some brand-new ninja troops. my primary mana troop set is around 23-25 and was thinking to bring these to 29 with 3 and 4 star troops. my primary crit troop set is only between 11-13, and secondary mana set between 6-8. I was thinking now, to level the ninja troops to level 9 at least with the lower 1 and 2 star troops. @Guvnor point is valid, with the suitability for AOE hitting heroes. My initial though was only to snipers to increase damage a little (with higher emblemed defenses I often see a hero still standing with few health left, instead of being sniped to death…)…
What you guys think, is it good idea with my troop feeding strategy or shall I leave ninja troop for the time being and look forward to bring crit set a little higher?
Raiding 3:2 usually…

Its hard to say which troops to use for everyone IT DEPENDS ALOT on the heroes you are using and the levels of your troops.

You must first understand you will get more tile damage from having all crit troops on your stack versus all mana troops given they are all the same levels.

What do I mean by short term versus long term? Short term means this. If you are using all crit troops and make a 3 match and no crits, the tiles will do less damage than the same 3 tiles had you used mana troops of the same level as the crit troops. In the long term though after making several 3 tile matches and 1 or 2 or 3 tiles crit, the total damage you did using all crit troops will actually be significantly higher than had you used all mana troops. Use the troop calculator to see the differences. Load up all lvl 30 mana troops and it will tell you the average tile damage is 409.5 per tile. Now load up all crit troops and the average damage without a crit is down to 383.4(short term) but since 15% of your tiles will crit and hit for 766.8 the average tile damage is 440.9(long term) That is nearly a 10% increase in damage per tile.

Using all lvl 30 ninja troops your average tile damage is 436.04 in both the short and long terms. That is only a 1% drop in damage versus all crit troops plus the added pierce ability. Also you do not have to worry about if the tile crits or not.

The argument can be made when using 1 crit and 4 ninja, that since all tiles hit harder and the average with crits only drops a mere 1% that using 1 crit with all ninjas is the superior method.

My personal advice is this.

Level how ever many mana troops you think you are going to use that actually remove a tile to charge. But really think it through. It makes a lot of sense on very fast heroes because 6.5 vs 6 is important
Average speed heroes going from 10 to 9 makes sense since that is 3 3 tile matches and not 4 matches now. Unless you are lucky and make a dragon or diamond.
But what about fast? They need 8 tiles, if you speed them up its 7. So the only way to do seven exactly is a dragon and a 3 tile match. Other wise you are getting at least 8 tiles anyway. Is there much advantage to speeding up a fast hero?

So now that you thought through how many mana troops and what level they need to be, level any ninja and crits you have equally. The ninjas raise the average tile damage of tiles that don’t crit to offset the additional crits you would get from a crit troop of the same level.

thank you so much @mattp169 for taking the time to educate me here! highly appreciated, really. feeding troops is so expensive later on, i kept all four star troops I ever pulled for later levels

In the overview: it seems probably to be beneficial to have at least a set of three per color on relevant level (lets say 1 mana lvl23, 1 crit, 1 ninja also to level 21/22), before maxing one troop out.

you are quite welcome.
if you do a lot of 3 stack and use only 1 mana then 1 crit and 1 ninja at the same levels will increase your overall tile damage the most. If you use 2 mana for speed breaks then 1 crit instead of ninja

erm, so issit safe to say lvl my mana troops to 23 & then stop? i only manage to get 1 x 4 star ninja troop purple, so do i stop lvl my lvl 23 mana & focus on the ninja troop? my main purpose is for use in war & raids

I would personally (and have) worked on a second set of mana troops to level 11 as the next priority. Get extra break points for Rush Attack tournaments and (coming soon) fast mana wars.

Also, if you have A very fast mana hero, it means you can break both it AND an average/ slow hero rather than having to choose one or the other.

Depends on your purple roster if that troop would be useful or not.

Of course, the mana breakpoints for very fast and average speed heroes are more crucial than for fast ones. Also it really is better to start levelling other troops as soon as the first mana troops reach lvl 23.

However, I do not agree that bringing fast heroes to 7 tiles is negligible! Dragon bombs are not that rare, but most importantly, as soon as a gap opens in the defending lineup, you often have situations where you can load your fast heroes with 2 combinations worth exactly 7 mana. Again, bringing very fast to 6 followed by average to 9 is more important. But if you are able to additionally load a fast hero with 7, it is worth much more than many players think.