As if getting a damascus blade or a tomb of tactics wasn’t elusive enough the already limited supply has dwindled even further. 5 months into the year an nary a single one of either. Mystic vision is being stingy also. Anyone else experiencing this? 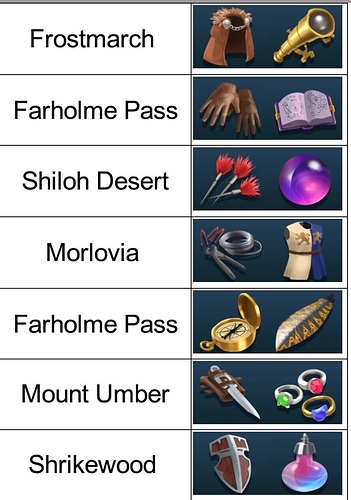 If you are doing the quests to completion, you ought to have several tomes and blades by now.

Thank you for the chart & rewards! Are the items a guaranteed reward for the quests? We used to get them as mission rewards & mystic vision also. So far, not this year.

I’m an active player, level 51 almost in 15 months, and I’ve only ever gotten one of each from mystic visions. They are extremely rare that way. Best way is through war chests, elemental chests, or their respective quests that come around

In the 10 months I’ve tracked Mystic Vision has coughed up 1 telescope, 2 tomes and 2 rings.

Quests are the only guaranteed and I will never miss that source, it’s 6 of each 4* per year.

Elemental chest and titan wins are the next best chance, followed by Titan Chests and War chests, still very rare from those sources.

What about adding Rare titans that drop Tomes and D- Blades and adding them to the POV rotation?