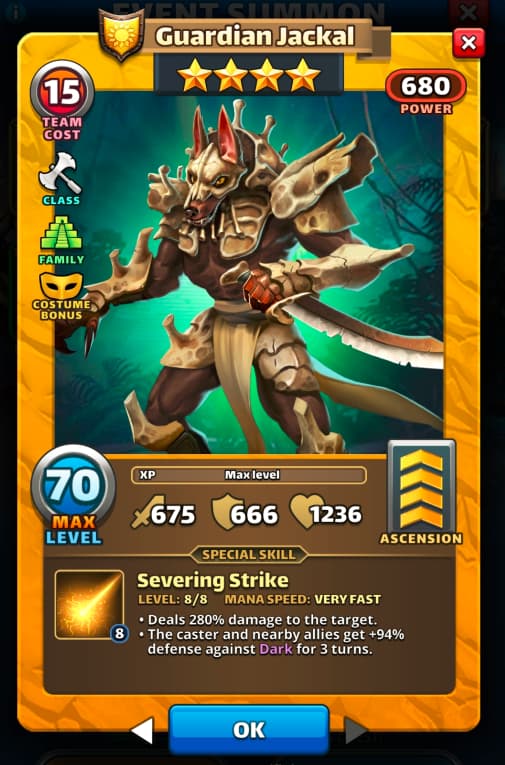 There appear to be no changes to Costumed Guardian Jackal from last-seen Beta stats, skill, and design.

What do you think of Costumed Guardian Jackal ?

This thread is for thoughts and discussion on Costumed Guardian Jackal.

Based on preferences Forum members have expressed, please try to stick mainly to Costumed Guardian Jackal and not wander off topic too much to other heroes.

Is Costumed Guardian Jackal worth Summoning For?

How many copies of Costumed Guardian Jackal would be useful to keep & Level?

What do you think Costumed Guardian Jackal’s Primary Purpose is?

What do you think of Costumed Guardian Jackal compared to other Heroes?

What do you think which version of Guardian Jackal is better ?

Is Costumed Guardian Jackal worth giving Rogue Emblems to the original hero?

In Defence, where do you think Costumed Guardian Jackal is best used?

How do you think Costumed Guardian Jackal is best used?

What do you think is Costumed Guardian Jackal worth Limit Breaking ?

If you would emblem Costumed Guardian Jackal then which Emblem Path would you select ?

Hmmm not that great costume skill, but it will buff up the basic more useful and fragile original

Thx, I have fixed it

Guess they learned their lesson when they bumped Panther’s EDD and later received massive backlash. So I guess the remedy is to offer element defense buff and make the costume utterly useless compared to the base.

The only purpose of his costume is to buff base Jackal and his terrible defense for Titans.

Yeah. His costume is only good to buff stats. Another lazy effort by Zynga.

I always like elemental buff defense, since you can use along normal defense up.

Guardian Jackal on offense can now counter Guardian Panther on defense (changes his def down to def up) which is great skill). If guardian Panther isnt present on def, you use normal jackal.

Elemental defence version better but he did arrive …. Though over shadowed by legendary mates

Any word on if this will be added to HA 8?

Costumes are not available in HA 8 so, and such is not tested in Beta. So no news on this

SG should question their hero design team, it is either an inner sabotage or a rival company has placed a member into this team. after so many years and recent experiences how can a costumed hero be designed worse than the original one. No logic can explain that and this is not the only one ( see also c frigg and c Lotl) so sad to see how they are completely lost

Little note to SG, if you are not capable to balance things out which obvious you are not lately, listen to your community

It’s still a good addition. You can buff original Jackal’s stats now. They are quite sad, even with LB. Congrats!

Zynga’s business strategy is sound. They would have analysed possible revenue generation scenarios for each costume iteration and each new hero release.

There are at least 2 golden geese Heroes each month. Energy and resources are poured into these Golden Geese Heroes.

Bulk of Whales will chase, flooding Zynga’s coffers with their minimum revenue of US$20m per month.

Stats increase is the only benefit & a welcome one.

I pulled the costumed hero on my last free pull. Seems to be the “level to get the bonus and then hide him in the closet” type costume. (I use Khagan that way.)

What is this costume trying to achieve really? Glass cannon but trying to be defensive. At least if he was fighter it makes a tad bit of sense as a suicide tank. If he revives he can buff dark D to nearby allies to weaken dark stacks. But no, he’s given barbarian for no apparent reason, as if anyone is going to use him on titans. Like wtf

And really? The first 4* festival costume and this is what they come up with?

Yeah, the special is not impressive. Though the design is nice. This is how I imagine Anubis. 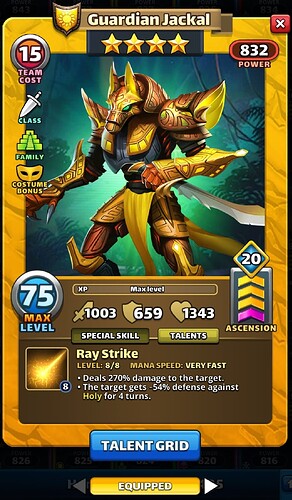