I have the ability to ascend one green, purple, and yellow hero currently. Almost at red! I think looking at my roster it’s obvious that purple will go to Freya and yellow to Delilah (maybe Poseidon but i already have two hard hitting yellows).

What I am in debates about is my green and red heroes and who to ascend next.

For green, it’s between Margaret and Mad Hatter. I enjoy Margaret since her buff but I don’t know if she is necessarily that much better at 4-80 than she is at 3-70 since her biggest function is dodging. I just got Mad Hatter last week and i haven’t really seen his potential yet. Is he a must ascend to use him well?

As for red, I’m stuck between Santa and Kestrel. I know Santa has great stats but he’s just too slow for providing ailments to the other team. I’ve had him for over a year now and he hasn’t impressed me all that much. Plus, i don’t currently need a tank since Heimdell is champ. I am also unsure about Kestrel. I see a surprisingly amount of teams in the top 100 with Kestrel (surprisingly as I’ll see maybe 5-10 of him throughout and not 0-1 like I’d expect). I don’t see that much potential for him so maybe I am missing out on something that others have clearly loved. There’s also Tyr, but I’m not a big fan of survival heroes who only focus on themselves and don’t provide any team synergy.

What do y’all think? I’ll post pictures of my roster so you can see who else i have for comparisons 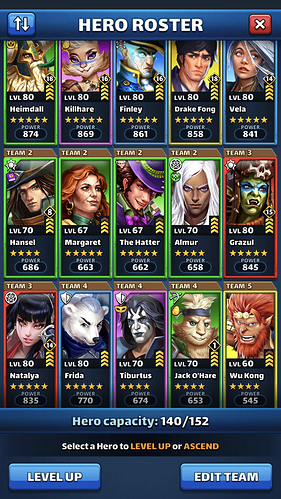 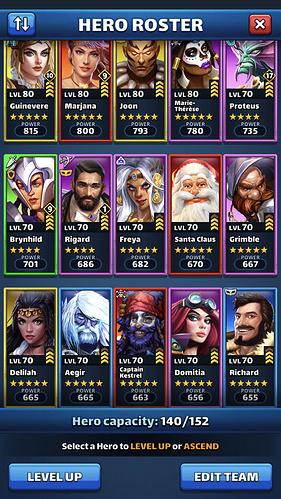 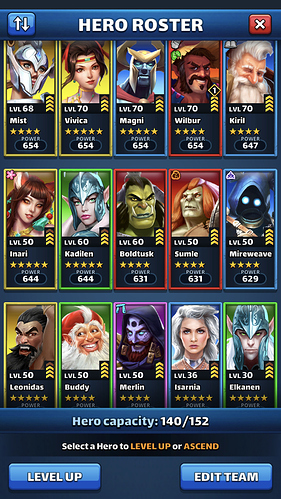 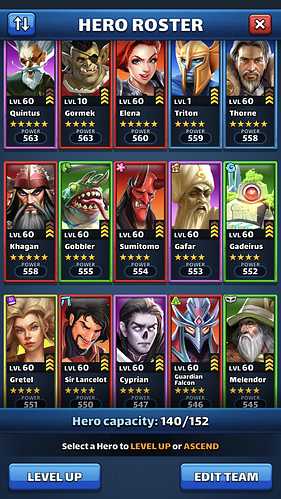 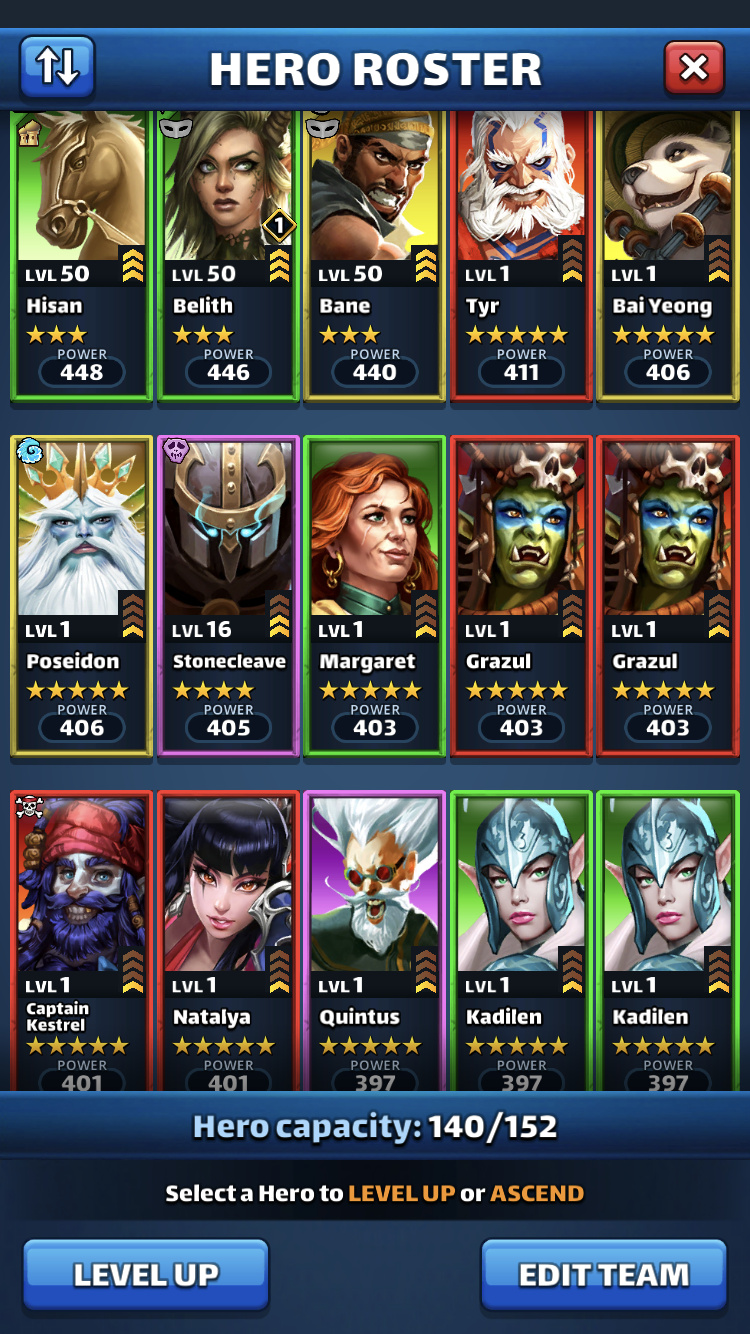 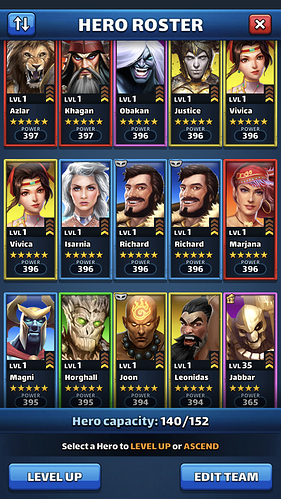 I think that Kestrel will serve you well. Imagine a fast speed Khagan(if the enemy has charged the mana bar).

He has nice damage, nice def and health and you dont have many red AoE maxed . Hes not exactly an AOE dealer like Azlar but hitting 3 could be useul and will add diversity to your support and sniper in red.

Regarding greens i dont know how better is Margaret after the buff in comparision to the hatter, both seem to be solid so you cant go wrong there. Think about Margaret and her solid attack stat, good for titans and in a green stack or even if you decide to go only with two greens. She isnt a hard hitter though but at least does some damage at very fast speed.

The hatter has less attack but is sturdier. He would do a sniper job . To try to kill or one shot enemies with those 400% percent of damage. Do you consider that you need a hard green hitter? There are better options, Lianna at the top.

Anyways good luck whatever you choose

I have Hatter and Santa, and ilove them both. But you do have better options over what i had at the time. Personally i love Hatter and i use santa with Grazul and GM so they go off twice then santa once by that time i won the battle. The Captain would just hit more and harder instead of me killing them with fire damage.

Hatter is pretty good, but not a must have. I’d still pick him over Margaret, because there isn’t anything more fun than stealing an opponents buffs, lol. If you raid a lot against teams with a lot of buffs, he’s really useful.

For my taste, I like Tyr better than Kestrel or Santa. You are correct that he doesn’t synergize with other players, but the revive, combined with the self heal and fighter revive make him tough to kill. I’ve had him revive enough to finish 3 other heroes when he was the last man standing on my team. Not many other heroes you can do that with.

I wish I had Lianna! About two years playing and over a year of TC20 and still haven’t gotten her!

Though with Almur now on my green mono team, his green defense down should give the extra support Mad Hatter needs to do some solid damage

That is a fair point about Tyr but I will never be able to allocate any emblems towards him. I love Killhare too much and she is getting every ounce of power i can give her!

No argument from me on that front. Killhare is a beast.

Freya, yes…and with those yellow strikers, I think Delilah will suit you well. I’d do Hatter over Margie, he’s fun and can be super useful at the right time. I have santa, and don’t use him very often because I have so many defense down heroes. I’d do Kestral, but I know a lot of people use Santa frequently.

I’ve had Hatter since he first came out and he really does need to go to 4/80 to truly use otherwise he’ll die too quickly and you want to maximize his damage. This is without any emblems. He’s situational but against teams with a lot of buffers, there is nothing more fun than stealing them rather than using a debuffer like Sonya/Caedmon.

Green – Margaret vs. The Hatter.
Honestly this is a tough one… I would personally recommend to WAIT and see if you get someone better. If you get to 11 or so Tonics with no better options, I would look at revisiting this decision.

Margaret’s best function is against titans due to her monster attack stat & the dodge ability.

So between the two, I would probably go for Margaret but honestly it’s a tough call & will depend largetly on your play style… take both to 3-70 & experiment so you can find this style.

Red
100000% kestral of the two. He’s a fantastic winger hero & one of the best Rogue options to give emblems to. Much better on defence than Marjana.

I personally don’t rate Santa Claus at all… On normal defence he’s just too slow with a mediocre hit damage… if it was reversed to do the Defence Debuff before the damage it might be more consequential but… as he currently is, I don’t rate him at all.

So DEFINITLY Kestral. Then Tyr then probably 2nd Grazul… then maybe Santa but I would probably rate Second Kestral or Azlar more

Thank you for your 0.02cents! Besides Heimdell, I’ve always been pretty weak on greens so i actually had 13 tonics! I decided to pick Hatter over Margaret and then keep the rest of the tonics for waiting for a better hero. My alliance is small and we don’t really care about titans, i have mad anxiety so I hate timer aspects of games so i don’t really care too much about titan strategy. I love raiding, wars, and tournaments so that’s why my gameplay is more aimed at. So far, Hatter has been really good! Paired with Almur and Heimdell, he is doing about 800 damage to the target and 400 damage to the nearby enemies while stealing all buffs. It’s come in handy a lot! It’s like having a more versatile debuffing sniper.

I agree with you 100% on Santa! I even made an Ideas and Feature Request probably about a year ago saying that Santa’s ability order needs to be rearranged because as it is now it is way too weak for how slow he is.

I am still unsure about Kestrel. I just can’t seem to find that niche about him. I feel like he needs one more ability to justify ascending him. He is basically like Drake, White Rabbit, Evelyn, etc. without the second ability. Even if he hits 3 targets at full mana it’s not that much stronger of a hit than those 3