As in topic which one to use as first 5 star red?Other maxed reds are wilbur,scarlet,c BT and sumle (soon).

My target defence is liana-clarissa-sif-crigard-tyr?

I would say Marjana as she is a very solid and versatile hero for your first red 5*.

However, if that is your planned defense Sif and Marjana are both rogues, so would go with Tyr.

The more information on your heros, ascension materials available leads to better feedback from the community.

Iim in process of ascending of heores i mentioned in first post and i wont be able ascend next ones in few months. I have many good 4s (jackal,hansel,gretel,proteus,c melendor etc) but i dont think it matters cause i can only afford one red 5 and i have only marjanna and tyr

I’d go with Tyr because:
a)he has better stats (season 3 > season 1)
b)he is a one man army: he’s really good for quests due to his resurrection + healing over time. Also in raids you’ll notice he might be the last hero standing, securing you the win in many cases
c)His dot stacks and I don’t think his % damage is that bad

Marjana. We already know how Tyr works he will get better ONLY when emblemed. Marjana can be improved not only through emblems, but also through the costume in a future version. Emblems and future costume bonus is more than enough to choose the classic legendary fire sniper.

S3 stats are much higher than S1 unless you have costume… And unless you’re a very heavy spender, you can’t assume that you’ll get a specific 5* costume (you might with luck, but never assume!).

Even if you then pulled that costume, stats with C-bonus are only going to be roughly equivalent to S3… In other words, without costume bonus a S1 will always be playing catch-up to a S3 - emblems on S1 will shrink the gap to unemblemed S3, emblems on S3 will increase the gap over S1.

I’d do Tyr over Marj in a heartbeat.

Tyr and it’s not close.

Tyr goes head to head with three other 5* and wins.

Tyr just has more stuff going on with him which makes him a pain. Will marj’s costume make her more relevant? Let’s hope so… especially since I’ve maxed two. Lol.

Both are solid options. So I’d go with the one you can emblem.

I do think tyr has the edge over marj. Let’s not forget his added damage when he dies too 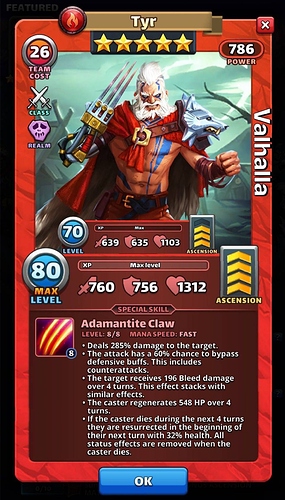 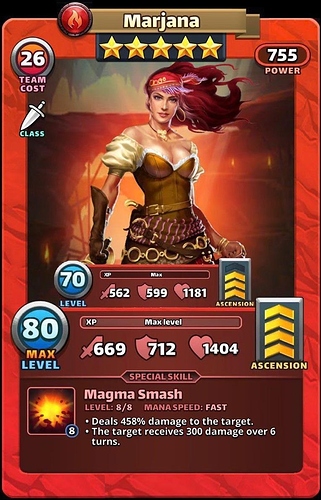 Both are solid options. So I’d go with the one you can emblem

This is where I slightly disagree…

Yes they’re both solid, but in power terms unless you’ve got a stash of emblems to take Marj to 6 levels higher than you can take Tyr, he’ll still have the better stats.
This seems unlikely since they mentioned BT and Sif?

I guess it depends how heavily OP has emblemed Boldtusk and Sif… And whether they’ll be sharing?

Brynhild is also comptetitor for rogue emblems i wont be able to emblem sif,marjanna and brynhild. BT can be stripped,he isnt my main char

I’d keep some on Boldtusk anyway, healers make best use of revive.

If Marj isn’t getting much heavier emblems than Tyr then this is a real no-brainer for me - Tyr gets the rings.

Tyr seems to be the popular choice and just a direct comparison, he wins for sure as the better “red”. I do think however that Marjana, especially with emblems and possibly a future costume is the better “sniper” in terms of direct damage. Tyr is an irritant with his 285% damage, but he will only one-shot a hero if that hero already has lost 1/2 health or more. Marjana does 185% more (on lower damage, that’s true) and can one-shot the hero, plus her DOT right afterwards. So while the overall utility of Tyr is better and indicative of the powercreep with the advent of Season 3, for pure “sniperness”, I still think Marjana is the better choice. The argument that you already may have your emblems in Sif can also play into your choice. In the end, level them both please…

I have the exact same dilemma. I have both of them at 3.70 and, although I consider Tyr a better overall hero and have some emblems for him, I’m really contemplating ascending Marjana first because she is weaker at 3.70. She does give quite a punch but has a problem surviving and her attack stat doesn’t do much for tile damage. Tyr, on the over hand, has better stats at 3.70 and has better chance to survive longer do to his self heal. So, thinking of the better roster for my war teams, I’m inclined to ascend first the weaker hero.

How many maxed 5* do you have already?

Especially ifI would advise against this kind of thinking - who’s to say you won’t get another/better red before the next set of rings?
If you pull BK or GM, you’d max them before either of these…

If you don’t have many maxed fives then you want the best ones possible to help get more ascension materials going.

Personally, this all screams to do the better hero first, and that’s Tyr.

Haven’t decided yet, just thinking about it based on experience using them both in war and raids. I only have 3 maxed 5*, among them BK, and 1 about to be maxed.

It’s sometimes hard to gauge at 3.70 how they’ll be maxed… Sometimes impossible.

Out of interest… As you have BK: do you have Wilbur and any hit-all heroes? This is an awesome combination…

I know, but i use what I have and try to make the best of it. Lucky enough, rings came the easiest to me and managed to get the set just before I got Tyr to 3.70.
Unfortunately, haven’t been able to get Wilbur until now. And no hit all to use with BK, just snipers or hit 3.

It’s a dilemma. I do think going with the best heroes (see Hero grading system by Anchor) is always a good basic choice to work from, and than it’s Tyr over Marjana (A+ vs A) by a not so big margin. But the second you have more choice, it’s advantageous to also look in the mix of heroes that you have. If I already have Kingston, Lianna and Gregorion, I don’t need the next great green sniper, I may need a green healer, or an AoE attacker, or a support hero like Tarlak that maximizes damage for my snipers. And that means I sometimes level up a B graded hero over the availability of an A hero. Anyway, good luck with your choice! Let us know

Especially on offense Tyr is a beast, his ablity to resurrect and self heal made him the last man standing to beat the odds against multiple opponents many times. He gives me wins.

My next red will probably be Marjana as she’s still a solid sniper.