I’ve recently transitioned to c2p and have 2 sets of tonics left, which will probably be my last for quite awhile and I’d like to get some thoughts on who they should go to.

I have the following Green heroes maxed:

I have the following Green 5*s:

My inclination is to give the tonics to Evelyn and either Morgan or Zeline. I don’t need Telly to tank, Yunan has that covered, and eveyone else seems like a step down from those.

I mostly care about raids and war attacks, as Titans are pretty well covered. I’ve got a fair number of Ranger and Wizard emblems but 1100+ sorcerer emblems, which makes Morgan appealing.

If you’re insistent that you don’t want to level Telly, then #1 choice is definitely Evelyn, then Zeline.

I agree with @Snusnu. Both Evelyn and Zeline are excellent heros for raids, wars, defense and tournaments.

If you’re insistent that you don’t want to level Telly, then #1 choice is definitely Evelyn, then Zeline.

That’s kinda my feeling as well. I’ve been a bit underwhelmed playing Zeline at 3.70 though. The cleanse and attack down are fine, but don’t seem game changing. Is there a role she really shines in?

I’ll get Telly to 3.70, and eventually level her, but I just don’t really need her for the things she’s best at momentarily.

Margaret.
You’ll never regret the decission.
She is incredible.

Hmmm, somehow, even after the buff I’m skeptical

Imho is Yunan harder to beat than Telluria… Well done…

I would ascend her…

Evelyn for sure. Her elemental defense down makes her a must-max. For the second, I’d max Telluria to upgrade from Yunan myself. Since you’re happy with Yunan, I’d max Zeline. She’s one of the few 5* dispellers that clears everything

Hmm. Do you have Hansel maxed? Him and MLF make an awesome duo.

Then it’s a toss up between Morgan and zel.

Do you have Hansel maxed? Him and MLF make an awesome duo.

I do, and have some cleric emblems that I’m thinking of throwing at him.

Eve and Zeline, without a doubt, for me.

On attack she is one of the best heroes in the game.

Margaret is a joke, even when finally buffed. She is nowhere near Evelyn and Zeline levels. Her only positive aspect is her being very fast and high attack stat but very very squishy I’d rather have costumed Kadilen than her. Morgan Le Fay is good but takes her time killing a target, I would rather have a 1-2 combo that kills in Evelyn and Lianna, eliminating potential threats during raiding or warring. Zeline is there to add insult to injury by debuffing the attacks of the remaining heroes if fired in between the 2 lady rangers.

She will increases your damages dealing…and will keep alive your team with elementary non dispellable skill. Be
Very useful during mono colour attack…

I mostly care about raids and war attacks

If this is what you are looking for you still won’t regret Evelyn. Pairing her with your Lianna will be game changing on raids. I’m already enjoying my “poor man’s Evelyn” + Lianna combo. When they are both charged it’s pretty much a guaranteed kill. 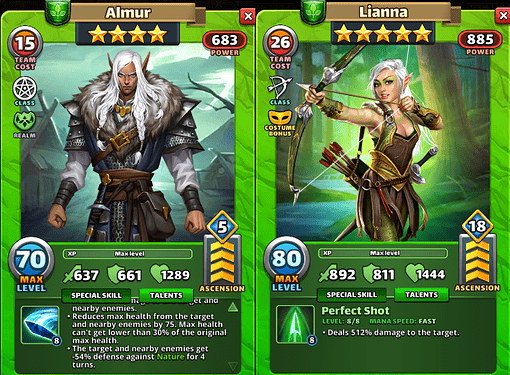 Yeah, I use Evelyn at 3.70 in raids a lot. I went ahead and gave her the first set of tonics, since it seems that’s the unanimous suggestion.

Will probably give the next set to Zeline, though still might look at Morgan. I like that her DoT is undispellable, which seems helpful in the current meta.

My inclination is to give the tonics to Evelyn and either Morgan or Zeline.

I am not too happy having maxed my Morgan. She only gets played as a solo-color support/attacker for my 6th war team. She isn’t bad, but takes no advantage of the general benefits of stacking. For a killer, she is killing very slowly - enough time for enemy to heal up or fire their special.

I have both Evelyn and Zeline maxed and emblemmed. In your case, I would suggest starting with Evelyn (to utilize the devastating Evelyn + Lianna combo at its max potential; but Yunan will also like it), then proceed with Zeline. Zeline’s damage under Evelyn’s debuff is quite significant, also do not underestimate the attack down. If you somehow do not tank with Yunan, Zeline will be great wing/flank for almost any team.