One of my ally member pointed out something I wanted to get confirmed by some players who already made some experience with it. So here is my question/description:

Why not hitting a Titan with a single attack, might that be possible to drop for example from a 13* directly to a 11*?

The logic behind it is quiet easy. The faster you kill a Titan, the sooner a stronger will appear, and the less dmg you do ones he flees, the more you drop down.
So fast kills, more titan points than slow kills and less points for fleeing and even lesser points if less or no dmg being dealt.

Can someone confirm this theory?

I THINK that the titan that appears is a function of your Titan score component of your alliance score.

This is a function of some number of previously s titans (strength, power, kill speed etc…)

All that is supposition tho… 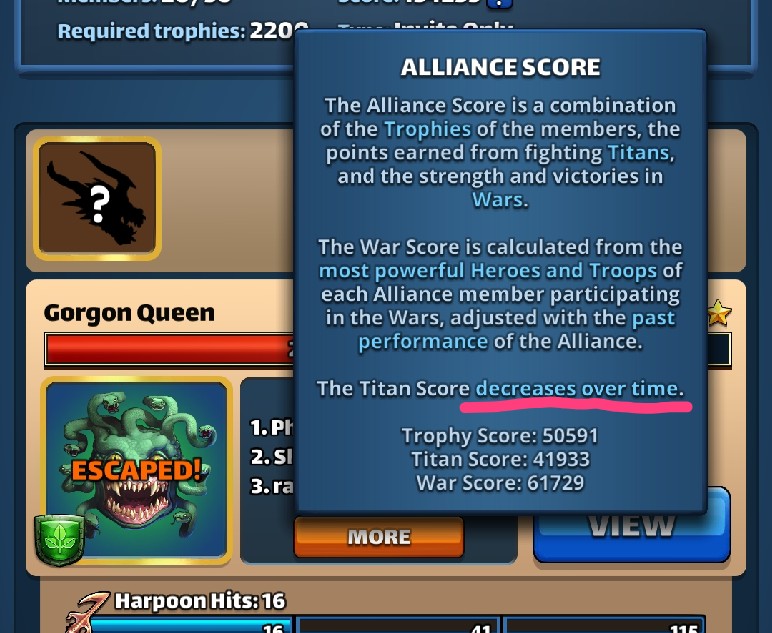 Our alliance is three weeks old and I’ve been tracking titan HP, and sometimes its increased by 500k, other times it could decrease even though the previous titan was defeated.

It’s not a glitch - titans are unpredictable.

Edit: The highest titan atm is 14* so until you are in one of the top alliances with team mates that can throw the kitchen sink at titans, the titan level your alliance is fighting will change.

Thats exact what I asked for, but not as a „there is something“ What I line to know is the math behind it.
And at which point cap does the 12* starts and ends.

@Sarah2
I don’t think it is unpredictable, there must be some math behind it.
We have a checked and compared the time were 14* Titans got introduced with an other alliance the Titan strength.
We had a 12* Titan with a way more HP than the 14* Titan from the others.

It makes somehow sense, because the other alliance does have much less total score and is therefore weaker.

What I assume is that the Titan points depending on rather each single attack %-decreases of HP and how fast a Titan got killed % compared to the time left.
Or maybe both apply.

So the question is for me, what are the figures in order to calculate this matter to stay as long as possible on a constant Titan *-level with as less escapes as possible.

I don’t think it is unpredictable

This is where we will have to agree to disagree. The fact that the titan score decreases over time suggests, titan HP will therefore fluctuate.

To date, we have had the same level titan four times, or just once before the level increased. We’ve released two titans, and on both occasions we dropped a titan level. Granted this is a small sample size, I am happy to share the data I have collected so far if that would help in your calculations.

So the question is for me, what are the figures in order to calculate this matter to stay as long as possible on a constant Titan *-level with as less escapes as possible.

I’m not sure that anyone has done the math on that and all we can ever really know about a Titan is hit points for a kill and how many stars; it still takes 23 hours for a new one to appear. If you use all your flags the Titan hit points seem to stay within 25% of the previous one. If you kill it with many flags remaining, the hit point score can jump by up to 50%. At least that is what my totally unscientific observations seem to indicate (I do track them). Letting one escape every now and then is not such a bad thing IMO; you are still going fill your Titan chest every week and letting one go is a bit like a reset on points. Over a year, however, it does add up to quite a few missed chests.