I have to admit that it may not work like i described anymore. If it spawn at the end of the turn it suppose to be impossible.

I recall it happened when Azlar was still a druid in beta, and there’s not many druids as tanks to notice that again.

Would the minion also reduce the damage taken by the hero? I was not able to tell during the battles I had.

Yes, the minion is a meat shield. All direct damage first goes against the minion until it dies.

I am always surprised by the number of times I kill a defender with match/ board/ physical damage from a missing hero. But if the enemy has 2 or 3 HP left. The same thing happens with minions. Very useful for clearing out mobs, and last defenders, from corners.

I have to admit that it may not work like i described anymore. If it spawn at the end of the turn it suppose to be impossible.

I recall it happened when Azlar was still a druid in beta, and there’s not many druids as tanks to notice that again.

Possibly a DOT went off during a defenders null turn.

We think this is just bad GUI design:

DoT is always applied at the end of the turn, so I’m guessing that Azlar didn’t have anything to do in his turn, with neither his slash nor special ready.

[Bug] Trails of Strength, Boss Revive not end of turn

@Petri, could the programmers put in a delay if a boss has a null turn? That would help identify if this is a bug, or GUI problem.

I don’t know if it has been said before, but I just comfirmed that a hero can have more than 1 minion up at the same time. Horghall is one of the bosses of the current Druid-/Cleric-trial and he spawned 2 minions. 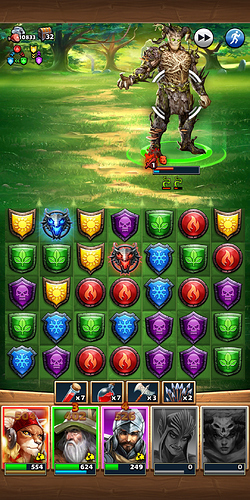 They spammed at the same time togheter at the end of the turn? Or first one and then the other?

Can confirm this.
Brienne had 4 up at one time in my battle.

They spawned not at the same time here.

4 up at one time in my battle

my vote just gone up

Can confirm this.
Brienne had 4 up at one time in my battle.

They spawned not at the same time here.

Having 4 meaning that you don’t kill any for 3 turns (quite difficult) or that thorns spam in the middle of the turn at any time.

Need someone record the battle, hoping to trigger multiple thorns.

Well I finished the battle and did not record it.
So maybe someone who hasn’t done the final battle yet can do this?

Hi guys i know it’s few days ago but can i check whether the damage taken by thorns will have chances to spawn another thorns out as well?

The description seem to mentioned the damage only spawn when hitting the heroes. Unless i am wrong on this.

Also can i check If the thorns able trigger spawning by getting hit - it come with 15% of the current hero HP? Or the max HP states they got from hero HP?as it play a big part for choosing the right heroes for this classes.

Yes, the only way to have multiple Thorn minions is if damage to a thorn minion can trigger additional minions.

I’m appalled that there can be more than 3 thorn minions at once. @sara is this as intended?

(Side note: my autocorrect keeps wanting to change it to Thorne minions. No minions for you, Thorne!)

Thanks for the info. Glad to know that hitting the Minions do activate the skills.
Talking about the Minions - do the stats look like

Max = include the troops’ additional Stats which highlighted on the hero stats during the game.

Is anyone able to verify this?

Minion stats are always based on the max HP as modified by troops.

Thanks for the confirmation- now if we can know what’s the % for att / def will be great. Haha i am greedy…

Defense is directly tied to the host: the minions are, in effect, just an extra layer of HP on whomever.

Attack, unfortunately, I couldn’t determine. Caedmon’s minion spawned when the last minion on the province was about to die of DoT causes. RIP.