Hi
Please
what is exactely…or what does they do " the thorn minions" of druid class ?
Many thanks from Brussels

I think of thorns as in the aura from d2… maybe the minions reflect the amount of damage it takes to kill them?

Ummmm. Its a minion… Itll do what every other minion does.

Anyone know exactly what it does? 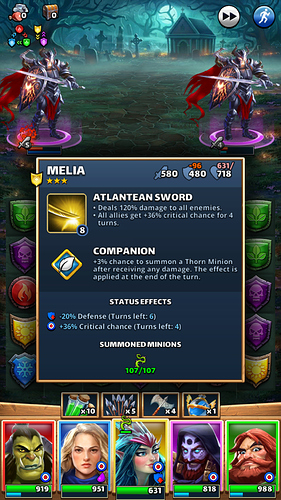 Trying out a maxed Melia with some emblems. First go, farming on 12-5 or something like that, thorn minion was hitting for 37hp every turn. 3% chance of appearing but it appeared on 2nd lot of damage and stayed for the duration of the (short) battle.

@HappyHippo Thanks for the info and screenshot! While I don’t have enough to add to my pretty little Zimkitty, I’m glad to collect all the info I can

Looks like that could help keep her alive since she’s not as stout as some heroes.

To upgrade Zim would take ages (I’ve got her too) so to get a hang of what this classes thing is all about I thought I’d jump in and have a play around with a cheaper hero. I’ve always liked and used Melia a lot and to essentially turn her into a 4* is quite exciting. Handy that I can choose the paths to up her defence and HP as you say she is a bit squishy. Hopefully she will turn into my mini Gregorion-wannabe mermaid!!

Close, appears its recieving damage spawns them. Thorns always makes me think D2 as well, although it seems that ability is equivalent to Perfect Riposte.

Really useful info here. It appears that a Thorn Minion has 15% HP of the hero. That’s pretty beefy. That attack is also solid considering it’s over a 3*.

Cheers K. I think there were level 4 mana troops on her in this battle which would have boosted her attack 20%.

Would’ve been funny if it was mini 5* Thornes

Many thanks to all.
Have a good play

Yesterday, as per a ss from Mariamne minions health was 5% on a boss… But brienne boss was nerfed… 22% attack boost instead of 48% so wth?

Minion “takes” the color of his heroes.
Melia is yellow. Normally, Thorn minion is yellow and hits a purple target. Probably do less damages on red target.

To clarify… is it (maxed) a 15% chance to spawn a minion per turn in which Melia takes damage?

Any idea if being hit multiple times in a turn increases the chances of spawning a minion?

I was trying to figure out what the minion did exactly too. My Belith has summoned it twice (and the minion even killed a severely weakened Li Xiu during a raid!)

All I can tell for sure is it attacks.

Standard attacking minion like Delilah’s or Thoth Amun’s then.

In beta it spawn even multiple at the same turn. It was hilarious.
One tile make appear it. The second kill it. A cascade made it appear another.

Just 1 word for attackers in a defence team: nuisance.

The second kill it.

So the max is 1 minion per hero. Right?

What I don’t know yet is the specifics of the minion logic… If the talent were maxed there would then be a “15% chance to summon a Thorn Minion after receiving any damage. The effect is applied at the end of the turn”…

Say I have a Boss Wolf tank with maxed talent tree (main reason I’m curious about this is because I think this talent could make Boss Wolf a great tank).

Would he have a 15% chance to generate a minion at the end of a turn where he received damage?

Would every instance of damage taken have a chance to generate a separate thorn minion (3 tile hits potentially generating 3 thorn minions in the same turn).