Haha, amen to that! I did build it, and even ran level 1 a couple of times, but have since converted it back to a second forge.

No, Path of Valor is not currently in Beta.

The next thing coming to Beta is Santa’s Challenge, planned for testing starting Thursday — though I have no idea what has changed.

They did confirm that there are changes though?

That’s interesting. I wonder what it could be… as long as they don’t get rid of Rudolph; he is the only 4* or lower hero I don’t have. I must get him.

I’m excited. I’ll keep an eye out on Thursday for news.

They did confirm that there are changes though?

No, but I’m not sure why else it would be in Beta at all, so I’m assuming there’s something they want feedback on.

Could be balance changes to the Stages, though new heroes are always a possibility.

as long as they don’t get rid of Rudolph; he is the only 4* or lower hero I don’t have. I must get him.

As far as I know, they’ve never gotten rid of a hero, only updated or added. So I think your obsessive collecting is safe.

Balance changes would be interesting. I mean, I was fairly new to the game last Christmas, but wow… that was hard. I had to use time stops and tornadoes to get through it. If Mother North fired, I lost. I couldn’t keep up with her healing and minions.

I love The Beta Beat. Getting details of what’s coming in the near future and discussing with alliance mates adds enjoyment to the game. Thank you and all the people who contribute to its development

Academy de heroes
Aren’t we going to have this year?

The christmas event is not new!
Only the challenges were redone not the seasonal events.

The next thing coming to Beta is Santa’s Challenge, planned for testing starting Thursday — though I have no idea what has changed.

As you can see here @Barrista

Maybe they add Jack Frost, the Grinch or the Ghosts of Christmas Last, Present and Yet to Come (Charles Dickens would be proud).

Back to the Roots? 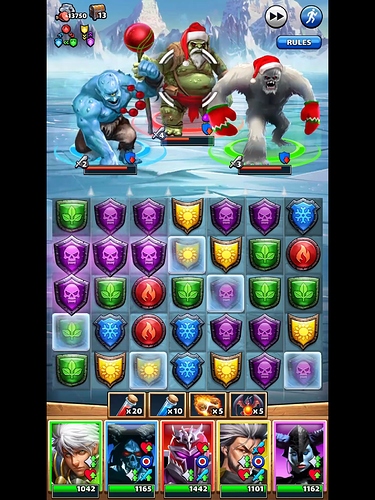 Not urgent but I noticed the dragon change. I have the golden dragon and since I got it I’ve also been allowed to swap color to green or purple as long as I have vip. I have never bought more than the monthly but I still have both colors plus gold. I assume gold stays but will I lose the purple color from the year-long one?
Gold one comes from when 3 friends complete l10 in vip invite challenge mission btw.

Edit: I saw that you got it

And yeah, I’m not expecting any major changes. I was surprised when it was implied that there could be and would like a confirmation one way or another, once it’s known.

I am also waiting for the news of the event (even just to hear nothing has changed) !!

Yeah, I was NOT expecting Seasonal Events to be changed until Zephyr suggested that it might be because the Christmas event was entering Beta.

Yeah, I think he posted that on Tuesday?
I have been thinking on this since that moment hahahaha.
My first Christmas event and I just want so badly for it to start (and to know if the summon will last until January to get vela!)

I think it was Tuesday, and he said that the event was supposed to enter Beta on Thursday. There might not be any change at all, I guess we’ll see. If it went into January last year, I think it is likely to do so again. I kinda doubt you’ll get a confirmation from Staff on that though…