Ive faced Set 3 times and the passive skill triggered 4/5 times his special fired, which was super annoying and lead to a loss each time.

The last time I faced him, I had 3 yellow heros almost at full mana, and Set was down to 30% ish hp and the mana reduction buff was active. There was a yellow match which would have killed him but because of the buff I elected with another match. That lead to a wondeful cascade into Khufu which charged his special… you know how that ends.

Anyways, I think people will be surprised when facing him.

I think there are also many sad stories about him. I tested him for many days and didn’t found him useful in offense, meeting him a few times in defense didn’t impress at all.
I think he is wrongly designed. His minions are too strong. He could gives the minions to everyone but himself, then you would see how useful he is.

Anyway, time will show if he is used or not. I would be very happy if he is more useful. For the moment I use Hawthorn as the dark support and Set is nit close to him.

How does he compare to Bera? Which one would you guys ascend?

Stats wise Set, but I have a special place for Bera… she was the Hero that brought me to diamond and she is still regularly used in my Anti-Minion-Team. Set is tanky, but he is slow, Bera can charge very fast and if you think of a scenario, where you attack Set with a team around Bera, he doesn’t get his beefy minions and is therefore not really a thread. Same with other minions that can be nasty like LotL, W3K-Heroes or Arco’s meatshields.

If Set gets a slight buff (makes some damage), then he would be my favourite, otherwise I would go for Bera for versatility

That hero looks like only players who spends tons of money on the game will enjoy to max. So far, he looks only useful at war def. I’d like to be wrong since I’ve got him in my last pull.

I use set and he is a great psuedo healer who works well with most offensive teams as the support hero.

After playing with Set, I think his mana speed should either be boosted to average or his poison damage should be higher or made undispellable. He is a decent hero, but realizing that he is one of the main antagonist of s5, he should do more.

I mean, stack him beside Hulda and he isn’t nearly as impressive. True, he does have a third ability, but I have yet to set it off nor has mine ever been set off. Personally, if they are going to keep him as is, they could adjust his third ability to last as long as he has a minion. If he’s killed with a minion, then reduce the mana of all by 100%.

IDK. I originally loved the idea of him, but after taking him off of my various teams and putting in a different hero, I realized he wasn’t really the factor in my triumphs or failures. Set was just along for the ride.

Fully agree and I posted similar feedback months ago. It is a waste to have him as he is. There many things they can do just to make him useful.

If it is true when SG say that they did buff a particular hero is not used enough, then we will see a buff in future. Lets hope.

Had him at 4/80 +20 emblems for a while now and I have to say that his only uses for me so far were mostly in bloody wars, mono teams in war and probably my most used case: autoplaying hard stages of s2-s5 stages.
His minions are so beefy that combined with a (over-)healer autoplaying even harder stages are no problem.
Other than that he is a very underwhelming hero to bring along though, especially since I have not once seen his most unique part of the ability triggered. It is somewhat self-countered by the beefyness of his minions.

@PlayForFun is there a balance discussion thread for Set already?

Initially, I thought he might be better. He will be great for farming and story mode, but definitely not a great threat for wars/raids.

Without changing the mechanics, making the mana 100% cut buff last 5-6 turns would make him more of threat but I dont think hed be overpowered.

He will be extremely nasty…
Don’t underestimate this card.

After pulling him, I honestly wish I had underestimated him and that he’d go on to surprise me by being awesome. Unfortunately that didn’t happen and I think he’s the worst season 5 legendary.

@PlayForFun is there a balance discussion thread for Set already?

No, but here is it for you: 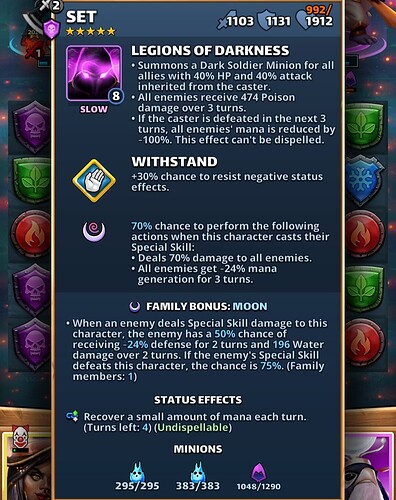 With frosth he can reach 1.2k hp for his minion. That’s crazy, it’s equivalent to the health of an S1 4* But I hate that plunger whip sound at the end. The sound design for e&p always includes these stupid goofy stock sounds for the specials, it’s very irritating.

Just turn off the sound my friend. I don’t see any benefit in having those. Have been playing without sound for 4 years.

Oh no or oh yes, I got Set …why not getting featured heroes. So is Set still good hero?
My purple left untouched are now Mystero, Set, and 2022 purple HOTM.

Sorry to be a downer but he really needs a buff. Even his niche is bad. Slow and only 3 turns, and he summons really beefy minions. Should be at least 5 turns

I only wasted my resources on him since I had so many tabards but hardly find any use for him outside of season 5. If I get an seasonal 5* I always seem to get the disappointments…

Set’s value continues to drop as they release more and more anti-minion heroes, The older anti-minion heroes were already a good threat to Set, such as Capt Diamond at fast speed being able to take out all Set Minions in one go. Now it feels like every other portal there is a top tier anti-minion hero introduced like Topaz, Eloise, C-skadi, C-Gefjon, Alucard, and Ogima