I’ve got my Senan at +20 and I’m not disappointed at all. He charges up surprisingly fast even by himself. I use him with Freya and I find that both charge at about the same rate by about mid battle more often than not. Would love to get a second Slayer to pair him with for the mana bonus.

Never considered him for def. He is a key to mono team.

The hero card now updated with the mana speed change in Version 47.

I got Senan in the slayers debut . He’s been sitting at 3/70. Still undecided. Maybe is all the OP heroes released the last few months. I don’t need him for defense and the other slayers I have are the 4*:s. Thought maybe with Cillian (Lb+20) in a 3-2 for offense only. Have 5 tabards and the other options are dupes. Second Killhare+C or second Guardian Panther. Seems like he’s missing something or maybe is the terrible art. He looks like a homeless drunk lol. Dunno

I play mono. Attacking 4850 with 4650. On the tough boards my triple max Senan is often last old man standing and the winner.

It also depend on emblems we have.
Cillian, Killhare and Guardian Panther all of them are Fighter emblems.

Senan is solid sturdy, good hit and have strong (high HP) fiends makers.
He is in my mono dark team.
Slayer mana charge is slower then avarage, but it become faster than avarage, and faster than very fast in Rush-Rule, he is also a sorcerer (class 20 mana +4%).
If we have Sergei, I think we do not need 2nd Guardian Panther (she is too weak without emblem).
Sergei is faster and defdown element all enemies, great synergy with Killhare CB or Senan.

Hadn’t thought of Sergei. Could also pair Killhare with Nadezhda (50% damage reduction) for the ailment. I do have emblems for Sergei. Could try something like this

Have some emblems for Senan if he gets promoted

Pulled him today gonna level now is hp<attack<def the right choice whej i get there.

So what is he emblems and limit broken?

Hello all, Welcome to database of 5* LB heroes. Heroes vary depending how players emblemed them. Database is up to date and heroes are sorted in category’s of there release. Doing this for future reference to all who would limit break some hero. Special thanks to @PlayForFun for help structuring database also big thanks to @Remus_von_der_Venus, @Radar1, @Photon for helping me find heroes and make suggestions to make this database even better for all to use.

Don’t sleep in the chubby dude. He self buffs his mana pet quickly… Place a 15% mana or a 20% magiv/styx troop on him… Throw in a 20% mana bump from ahhotep/xnolphod and they guy can charge in 6 tiles… Events/towers is where he will shine the most because of all the turns… But in raids… He can be a great contributor (with xnolphod). I said elsewhere… Lu bo at 11 tiles versus senan at 10 tiles… Lu bo wins… But lu at 11 and senan at 6… Senan hands down. Also… There is a way to get him to go off in 3 tiles… And 2 in vf events… But the latter is not going to be typical.

can you explain how many % mana he needs to make him cast skills in just 9 boards?

I don’t have xno/ahhotep , so I don’t think I can get 6 boards like you said.

Sure… Give me a minute and I’ll screen shot the math.

First the preamble… I’m pretty sure slayer speed is 11 tiles… If I’m wrong someone let me know. Emblem mana bonus is 4%… So… At 15% mana troop, If he gives himself 1 stack of 5 percent before you start marching dark tiles, he will go off in 9 tiles thereafter… Maybe sooner if he keeps adding stacks. At a 20% stack he will go off in 8, 7 with a 40.

To get him at 6… You’ll need an Ariel or costume yunan or odin to push him to it. 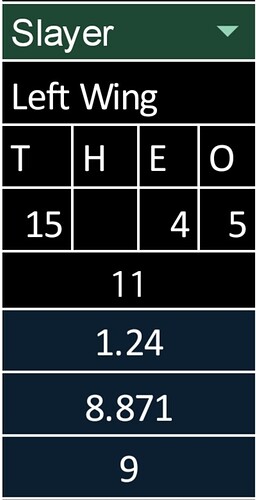 So you almost have to be unlucky to not get him off in 9 tiles.

You can play with the mana calculator here… I need to revise it a bit… And you have to ask for permission to edit… Because i don’t know how to waive that… But it is a solid tool.

I made this a while back when there used to be only very fast, fast, average, slow, and very slow. It is still a work in process because I’m not sure if we have established exactly what speeds Slayer and Styx are at. Sure… around 11, around 6/9/12, but when using the spreadsheet, even a .1 tile/shield can mean the difference between 6 tiles and 7. Here is a Youtube video made around midnight… so not exactly at my most lucid. But the premise is simple. Change the mana speed from the drop dow…

Thanks very much @2puttshaqur
this is really helpful.

I think i also figured out how to share the document without people having to ask for permission… Maybe.

If you have Phenexa, her Bard family bonus will add 5% mana if there is only one slayer in your team. That will literally make Senan a fast hero.

I luckily pulled Pnenexa and Senan in that portal, I may try that combination.

@Petri give a little buff for Senan.