I personally do 25-1 for Gadeirus+Atlantean Drone. it is one of the only two 5 wave stages in the last three Provinces (the other being 27-3) in 27-3 there is Atomos + Gadeirus as final bosses and you can easily screw up by not killing Atomos before he triggers and he is a kind of pain in the ■■■ then So 25-1 all day long for me: My team: Delilah-Gormek-Natalya-Azlar-Delilah (absolutely delightful for this stage)

Monsters per wave seems to vary a lot between levels. I’ve seen a few patterns, though. @Pois1 found some of them. (If I remembered which ones I’d do a better job of giving him credit

All the farming data I have on monsters includes (at most) a total monster count for the level; no counts by wave, and no counts of the two possible monsters, so I’d have to collect new data to check any of this out.

All the farming data I have on monsters includes (at most) a total monster count for the level; no counts by wave

Just like recruits having a pattern and ingredient/ ascension item number of rolls, it would seem that finding out the pattern would simplify analysis.

If there is a 50% chance of 4 mobs for each wave, then the odds of me getting 19 were 1 in 16 but I could go hundreds of runs without getting the magic 19 monsters from the stage.

As a side note for those who may not have noticed; in late stages (22-6 is a good example) there are enemies in waves of 5, in a M shaped formation.

@FrostbiteXIII or anybody else who collects data on drone counts, I’d request you record total monster counts as well.

Gadeirus needs to be subtracted from that total but it will help confirm / reject the hypothesis that the two possible mob monsters are distributed 50/50.

Picking on that level, here is what I know:

If it Is 3/4 monsters per wave, with no 5 monster waves, your range would be correct.

If 50% of the monsters are Atlantean Drones, average would be 8 per run, after subtracting the Gadeirus.

S2:25-1 farming for Atlantean Drones and Gadeiruses:
Waves: 5 (3-4 monsters)
Monsters: 14-18 + Gadeirus
From my past experience it is not guaranteed that Corrupted Drones will appear. You can have an extremely rare run with only Atlantean Drones.
Happened to me in Special Event once where one of the monsters was not present at all.
Atlantean Drones are always guaranteed since they accompany Gadeirus EVERY time.
So you can get 2-18 Atlantean Drones in my opinion.
Maybe 2-17 if one appearance of the Corrupted Drone is default.
I will investigate this more in detail

Since I enjoy this a great deal I will continue to gather data. 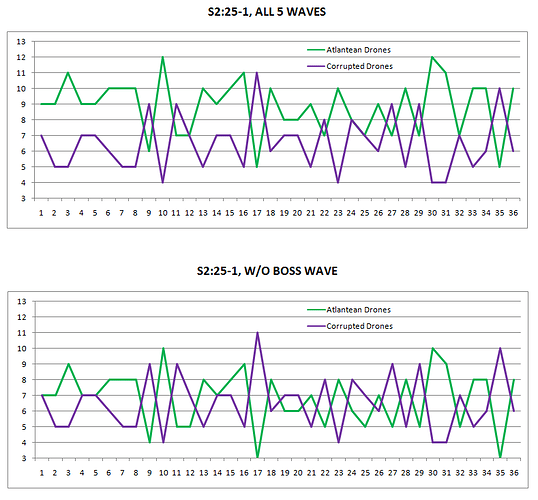 Without formal statistical analysis, I’m going to revise my list for 2:25-1N based on @Pois1’s data:

That brings the totals to 3.5 monsters per mob wave, 1.75 Atlantean drones, with a grand total of 17 monsters, 9 Atlantean Drones on an average run.

I’m very curious if 2:27-3N has the same monster pattern, because it has about double the recruits if I recall correctly, and it has the same monsters, the same boss, and the same number of waves. If so, it would be a better stage to farm for those missions. (I haven’t checked, but it should have marginally better food/iron/XP as well)

Late addition edit: doing the math for 17 monsters (14 in mob waves) the odds of getting all the same are .5^14, or one in 16k runs. So seeing exactly 2 or exactly 18 Atlantean Drones is VERY unlikely, but if lots of players are farming for that mission, it probably will happen a few times, since way more runs than that are going to take place. Odds taking into account the range of 12-16 mob monsters instead of the average of 14 will make for more complicated math but I doubt will change the result much…

Edit2: More data from Pois1 shows that waves appear to have consistently have 4 monsters somewhat less than 50% of the time , so my guestimated numbers here are a touch high.

Thank you for creating this. What does the colors mean in the picture? Some levels are in white, red, green, yellow, or purple

There are only green and purple monsters in 25-1.

Sorry @BarryWuzHere, I’m just using loot tokens to complete them and have stopped writing down the stats now anyway…

Hi, I take no credit for creating the picture, but I believe that the colours tie in with each other. For example if you wanted to kill Kirins and freaky bird people, you can see the yellow overlap.

Do believe they just reused some of the same colours tho. Not sure if there’s a reason or these were distinct enough that the cut off was reasonably obvious…

Subtracting the two guaranteed Atlantean Drones, the RNG mob monsters average 6.77 vs 6.58; I haven’t attempted statistical tests, but that sure sounds like a 50/50 chance to me.

Fascinating. That combined with the average being 16.35 instead of 17 makes this look more interesting than a fixed 50/50 chance.

I love seeing lots of detailed data about one level like when patterns start to appear.

If you or anybody else collects similar data on the other 5-wave level, 2:27-3N (Which appears to have a lower drone count but far better recruits) … or even a 4-wave level, although that would clearly be worse farming for finishing the missions, I’d love to see if those statistics match!

You are right of course.
I will add the Atlantean Drone vs. Corrupted Drone without the fifth wave ratio.
It would be 50:50.

mob levels have 3-5 monsters. I’ve seen waves that are always exactly 3 (S1 “Boss levels” where all monsters have special skills, perhaps others), waves that have 3-4, and waves that have 3-5; I’m not sure if 4-5 monster waves exist or not, but 1:7-5 is a good candidate, perhaps some quests as well.

Maybe we are saying the same thing using different words.

With only 35 runs, I am not sure if this is significant. Paging @Garanwyn

With only 35 runs, it’s more suggestive than significant. The 95% confidence bound is +/- 15.6%. It’s pretty clear the last wave and the first wave are drawn from different distributions. But the non-boss waves could all be draws from an identical binomial distribution with relatively little difficulty.

As near as I can figure it’s this:

White: No link to any other mission, so these critters only in these stages for missions
Green: Links to the mission directly above or below, so links to the boss/minion critters of the same tier.
Purple/Red/Yellow: Links to a mission of a different tier, so you can farm Moths with Undead in purple stages, Stegosauruses with Macaws in red stages, etc.