Hello everyone. I have been playing E and P for about 2 months now. I didn’t want my grandson to think I’m a square or lost in the times so I started playing to be in his alliance. At first it was fun cause all I had to deal with is leveling new 3 star heroes but now that I have 4 and 5 stars, it’s quite harder.

Also talk about this hero is good for this and bad for that is confusing. I want to get better for my grandson so can someone help me for a good team for defense, offense, raids and so on from my current team. Maybe even help with a priority list of what heroes I should ascend first. Thank you, your help is appreciated. 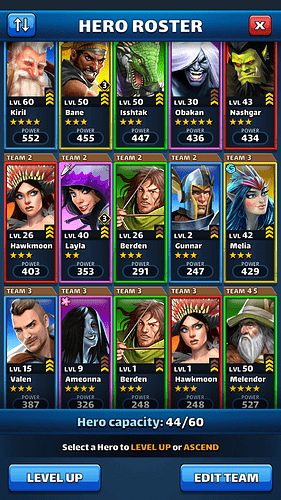 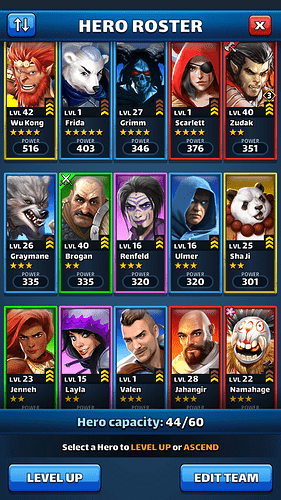 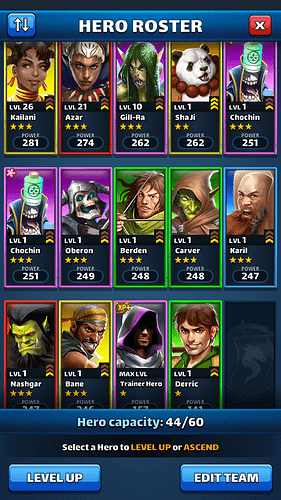 Heroes that increase your attack or decrease target’s defenses are the most useful ones.
You don’t have yet all the heroes @KongK has but feels free to follow the same advices:

Thank you kindly for the help. Its very appreciated.

Wu is a must as well as Kiril. Frida is good but she’s a 5 So she takes a lot of time. Wu and Kiril go well on any team, their attack increase stacks so you get 30% increase from Kiril and 185% from Wu. Those are hero’s you will use for a long time perhaps unto end game(although there is a HotM coming in June that is a 5* version of Wu.) but that’s if you get him. Build a solid backbone of 4s to play as they’re cheaper than 5s and you can use them to compete enough to get more mats for your 5s. Good luck. For hero info, there’s lots of guides like

7ddgaming.com/guides which grades hero’s. Razor also has a great tool that uses those grades plus statistics and you can plug in your heros and see how they rate.

Thank you for the wonderful advice, I’m very grateful.

In my opinion, the biggest problem newer players make when they end up with 4 and 5* heroes is not so much that they don’t know what to level, but neglecting the 3* bench that is both easy to level and just as functional for when ur starting out. My advice to you is to focus on only 1 4 or 5* until u have a sustainable war bench. This will allow you to both accumulate ascension materials and contribute to wars, where u can get more points and get more ascension items. 4* and 5* consume a lot of food and heroes to get to the mid range usefulness. As your 4 and 5* heroes become more powerful, by all means, swap them out for the 3*. It’s never a good idea to grow too fast, since that is what discourages people (lack of materials, time it takes to level heroes). It takes a LONG time to max a 5*.

You make a lot of sense. Thank you kindly.

Hey Vic! I found your original post, so I’ll try to respond and chime in with thoughts here too. If you have any other specific questions though, feel free to fire away…

So, the first thing I would do, if I were you, would be to focus on maxing your best 3* heroes. In my opinion, those are Nashgar, Hawkmoon, Berden, Melia, Valen, Ulmer, Namahage, Chochin, and maybe Azar and Gill-Ra.

I’ll give an “honorable mention” to Gunnar and Kailani too. If/when you ever get Brienne on your roster, she has fantastic synergy with these two. But I don’t find either of them too useful on their own.

After that, focus on bringing your 4* heroes to tier 3, level 60. All five of your 4* heroes are pretty good ones (Kiril and Wu Kong, in particular), so I wouldn’t hesitate to ascend any of them to 4th tier, and finish leveling them. (Ameonna is a bit difficult to use properly, and she’s the weakest of the ones you have already, so maybe hold off in hopes of getting a better purple 4*?)

Frida and Obakan are both good too, but as others have stated, it takes a reeeeally long time (and a lot of resources) to level 5 star heroes. You’re better off focusing on the 3s and 4s for now.

OMG @Vic1! You are amazing that is so sweet. I’m 41 years old but I want you to adopt me as you’re grandson

Hello sir. I think I have a few new heroes in my new pics, see if you can give those a look over as well. Thanks again!

Sure thing, games are best when shared with others. :))

Excellent advice and it helps a lot. Forgot 1 thing, who to use on titans and who should defend?

You should bring Wu against every titan. Generally, other than that, you want to color stack. Bring four blues against red titans. Bring four purples against yellow titans, and so on.

That advice may be a bit too advanced for where you’re at right now though. Once you max more 3s, and have adequate depth to really do that, do it. Until then, it’s probably also a good idea to bring Grimm to every titan fight, because his defense debuff is a big deal against them.

And actually, if/when you max Gunnar and/or Kailani, they’re really good for titan fights, because they can really help your whole team stay alive a lot longer. Bring the little mana potions, and if you find yourself having a hard time keeping the titan stunned, charge their specials with mana pots to buy yourself a few extra turns. (And again, if/when you finally get Brienne, then bring Brienne and either of Gunnar/Kailani to every titan fight.)

That’s the stuff I needed to hear more than anything. Thank you so very much@!!!

Glad to help! By the way, if you’re ever looking for a new alliance (same goes for your grandson) check out the Crew family of alliances. I have a second account in Crew-Squires (my main is in Crew-Saders), and there are a few others too. Different alliances for different roster/skill levels, and different dedication levels.

Edit: Actually, probably not your grandson. LOL. Forgot we have a minimum age requirement of 18. (And I get that that means probably not you either. Oh well! It’s hard to turn off the recruiting bug…!)

It’s not a problem at all and Yes, he is only 12. We actually have an alliance but for our family of course and he is our leader, he gets a kick out of being able to boss the adults around. Thank you one last time for all the wonderful help.

Haha, I bet! That sounds great. I’m afraid that if my family found out how into this game I am, they’d all leave me, so I’m a little jealous, LOL!

I get it for sure but you’re better of as you are. You wouldn’t believe how dramatic things get due to this game being a family affair. Ppl are jealous of others pulls, they buy gems behind other ppl’s backs and accuse one another of silly things. I wish it was just my grandson, me and my daughter, it would be a lot better. Thank you again for your time, I’m grateful.

Btw, I got Guardian Jackal today. Is he ok to ascend or should keep the mats for other heroes?