so I think Grimm could potentially replace Wu.

Wu is tricky. If you match just three tiles he is not very good, but if you managed to make a combo, it is devastating in 99% of cases. Especially if you use Wilbur and enemies share damage.

Any1 have a list of experience per stage? I only know 975 by heart for rare 3, but would like to try and manage my exp a bit before leveling up

without using items and plasterboard at 33000 without repeating any stage

Just finished epic. Used Wilbur +20 / Chef Boldtusk +18 / Scarlett / Colen / Falcon +18. No problems at all. Lady Locke came back as a zombie, and so managed to be the last one standing. With antidotes cutting 95% of the sting of Sargasso and Locke, this one is a whole lot easier than Avalon, Wonderland, etc.

I’ve been working on my challenge teams for a bit and seen a lot of the heroes everyone uses. Many of them I have and have incorporated them into my teams and adjusted accordingly. Although my scores have definitely improved just going mono and using heroes that compliment each other, I still can’t seem to really get them higher and I’m wondering if there are techniques I am missing?

Any tips on how to drive my scores up a bit and get better rankings? Any thoughts on my teams? Etc. Would love to get into better ranks, but can’t seem to.

I think this applies to all events:

Any toughts about boomer ? Considering i already have Proteus , tibs , rigs , Sabina maxed and a second rigs on his way.

Sadly didnt get Telluria yet

As I already got Telluria, I was mit too keen on pulling during pirates…well, decided to do a 10 pull in the end to maybe get my first Peters…

Got lucky, even pulled my second one in the same pull as well

Ok, just for the record I finished all three tiers with the teams below. Same team for all stages.
As usual, not trying to compete … just want to complete and move on.
Did all levels at first attempt … small antidotes are very useful in the latter stages.
And QoH rocked in Legendary! 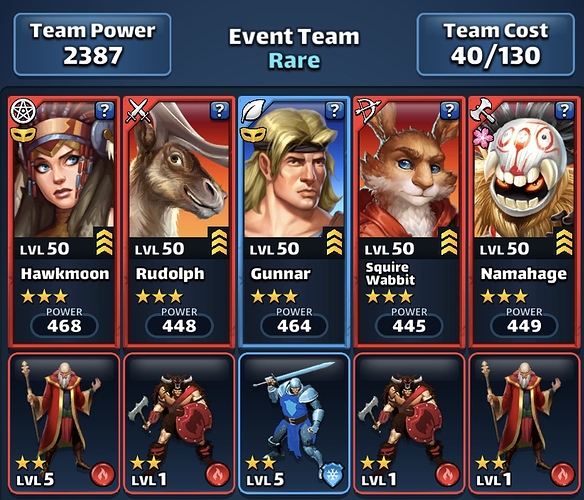 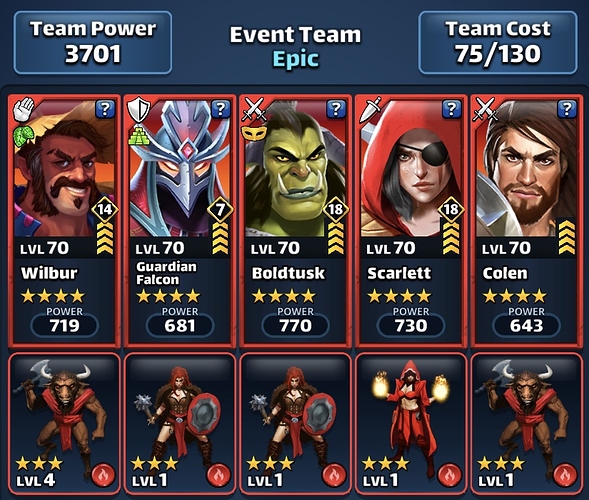 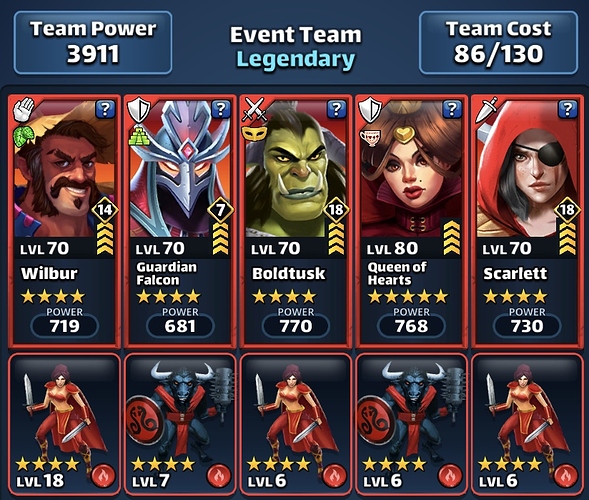 Finished the Pirates on my alt without 5*

now I can concentrate on my main and try to compete, yeah

This was my team, I needed more scrolls on the level before and had only 3. Had to revive Boldie and Grimm, but didn’t use up all items. Great. With antidotes this event is relatively easy, but I don’t really like it -.- 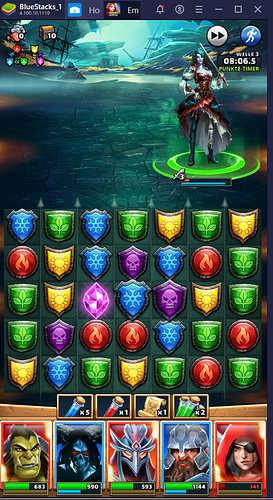 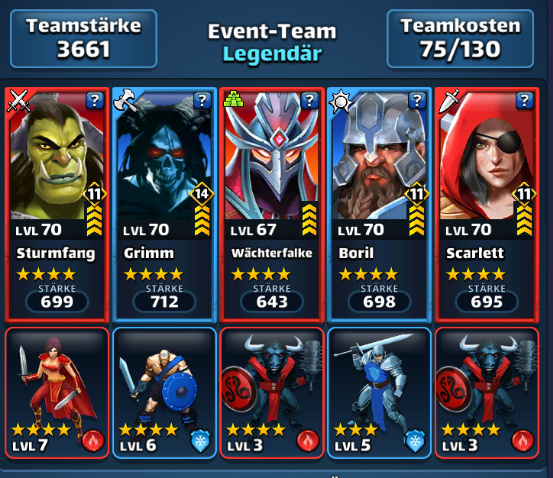 Got him on my fourth pull. Was expecting just another S1 3* hero and then… Bam! Couldnt believe it in the first moment. 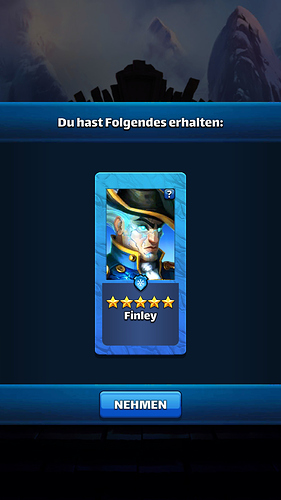 i don’t think Wu kong is worth it when your team already has wilbur falcon and boldtusk; your hits are hard enough, no point adding misses.

Replace with another red.

Finishing the stages quickly is the key to higher scores. Battle items to clear stages, and good boards. I watched an alliance mate score 110k+ in the final stage of Legendary with a red mono team, Potent mana, axes, bombs & dragons - twas magic!

So, I didn’t plan in trying for any leader board placement but in Legendary I am doing good. I am in the top 2500 right now. My goal is to remain in the top 10,000 so I can get decent rewards. I think I will stay there now but to secure it more can anyone give advice on which stages I could easily improve on? 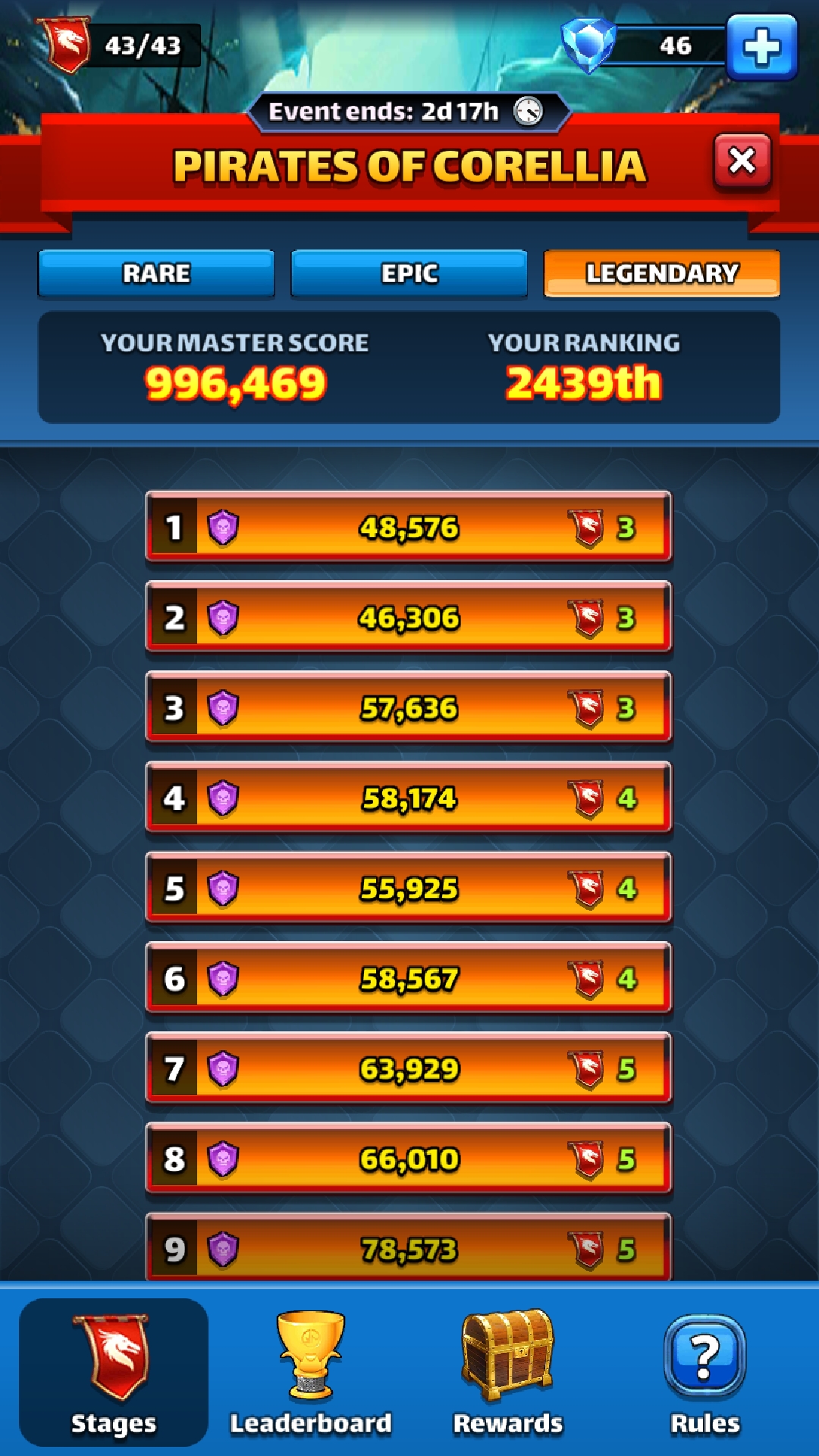 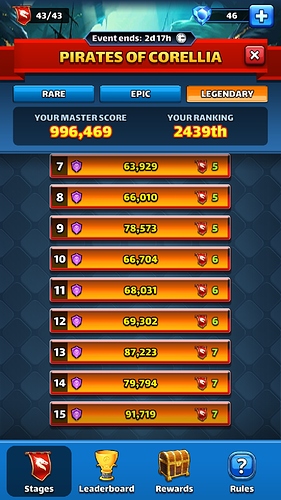 I have tried redoing 1 + 2 a few times but don’t seem to be able to increase it, i think I am just getting bad boards or I need to kick off instantly with bombs and dragons? I seem to waste a lot of time getting past the first Wave

you can definitely increase 9 and 14, but you have to remember that there’s also a greater WE cost associated so you you have to essentially divide that gain by the amount of WE to see which stages are best to increase.

IMO: 9, 14, 2 and 1 seem like obvious stand-outs, but I haven’t completed legendary yet so I can’t be sure, this is just from experience looking at past scores of other events.

Check out my other thread for reference scores. I find that at least, the scores for stages seem pretty consistent if the ranking vs total score isn’t, amongst different events.

Thanks! Just did Stage 9, first I only got 74k but the second run I just got 84k, so I have increased my best score by 6k

I will try 14 now. I am using my last WE Flask with 33 energy so I have a few attempts at least.

Edit 2:
Had a challenge coin on Stage 15 but it took me 2 mins to get reds and kill it!! Improved the score only to 92k with that extra 5k. That’s annoying lol

Edit 3:
Okay now 93k without the coin haha. But out of energy now, that will do though, I think. Back to farming Rare Stage 3.

Ugh, a chest coupled with literally the worst freaking board ever; I literally killed a couple of minions by throwing like 50 off-colored tiles into them… wasted so much time, didn’t get my chest and more importantly, it would have been such a great scoring run… T_T

After completing rare and epic I started working on legendary out of boredom, just to see where I can get (in previous event, Avalon, I couldn’t even finish Epic). Surprisingly I am now just two steps before finishing, with Neith, Onatel (both at 3/70), Mel, Kirill and Scarlett and I have enough bombs, dragon attacks and mystery scrolls to believe that I can actually finish! Even if fights take forever (more than 10 minutes per each step).