Is costume joon worth ascending based on today's heroes

My current holy’s are motega, neith, odin, uraeus, hanitra, akkorog. They are in the heavy rotation… But i have mist, justice, Leo, Anastasia, and vivica.

In my play style… I have zero emblems for joon, and i don’t really see where he would fit in, especially with motega’s almost pregnant 50% blind on all heroes… Thereby i don’t think he is worth the darts.

Also… Even with a fully leveled costume mana bonus… I can get his tiles to charge his special down to 7… But not 6, outside of certain events or with odin…

And based on today’s heroes and s5/gargoyles/3 kingdoms… He just seems very out dated.

I’d maybe consider leveling him if i had 18 darts… But with only 6… I can’t pull the trigger.

Definitely not with your roster + no emblems for him + having just six darts atm.

It all depends on your roster. For me, definitely yes. For you, it’s hard to see which hero he would replace.

I love mine…. I dunno

Costume is fighter …. Keeps coming back. But need blems……

I dislike him in many ways. You have pretty cool heroes already, he won’t make that difference.

Still worth the level up for an extra hero for towers and such if you have spare darts. They kept spamming new heroes and new customers every week. S1 costumes are mostly already garbages and their stats are low.

when it was said there is none that can be replaced, I looked at Akkorog, have one fully emblemed and limit broken yet I often preferred taking Joon ( also full emblems with limit -break) along for the job…he would often take out an imminent threat…
As for Akk shuffling team can sometimes cause trouble and then he may just weaken 3 when the need is outright kill!

It all depends on play style and the determining factor here is emblem…you don’t have for Joon…it’s pretty much decided.

Here is the thing. Older players already ascended Joon so that when the costume turned up it was an obvious benefit. The thing is for later players who may not have had the Joon staple with certain heros outclassing them the darts would be better utilized on certain Holy heros that are a benefit to your roster. It is not a bad hero just not outstanding with the current meta. Good luck with your decision!

This is my costume Joon and I use him a lot …
But I got Joon early and maxed him and gave him +20. So when I got his costume it was common sense to max that out too.
However, there are better holy heroes since Joon was introduced into the game. The costume, emblems and LB still keep him relevant…
But in this game, with all the new OP heroes that we are saturated with, current rosters soon get outdated.
With that in mind, consider how long you want to play this game, how much you are going to spend to get new shiny heroes, and how long you are going to sit on mats before you ascend your next 5* ….
Good luck 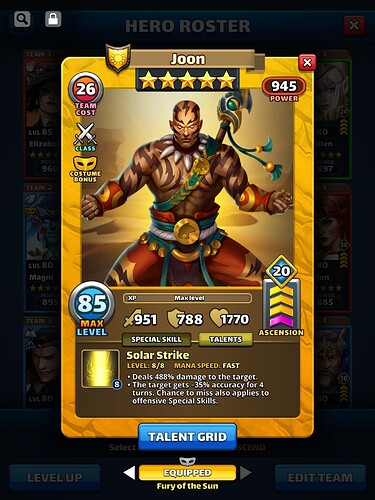 no matter what anyone thinks, Joon is one of the best sniper heroes. I wouldn’t have thought of giving him ether, but he cooperates great with defensive breakers in mono attacks.

I maxed my Joon long ago and use him a lot. He is ok with low emblem , I have him and +6 for months and emblem him up till +20 recently. I pulled Akkorog from ss4 last month but he is the one that I wouldn’t max, just not fit my playstyle. I also max Hanitra but don’t like her as much as him.

Indeed!! C. Joon is a beast!! There are just few snipers competing with his attack

Especially if fired after jackal or c. Leo. Lol yeah imma do my 2nd one. … that being said …

Nice to see yours lol hahah

well i would clearly say yes, he is at the end of a day a heavy hitter. a one-two combo of Uraeus and Joon can kill most heros.

I have costume sausage and i pair her with costume tiburtus and Sergei, and she hours for 1400 in a near definite kill.

But the only real defense downi have in holy is mist with her def down against specials… So with my current peeps, I’m not sure i can get a definite kill from him.