Help me spend my Darts - which holy to max?

Have entirely too many great options on the bench but only have 11 darts right now. I can do one now and probably a second very soon.

I have maxed Cobalt and Onyx so I think I’ll do Mica for that sweet, sweet family bonus.

But then what? Would mainly be on offense in a mono stack and perhaps for titan team.

Devana seems great for current minion meta, Norns is just super cool, Neith is like a Swiss Army knife that does a little of everything. Is tanky Guin still worth the darts, even if I’m wanting to use her on offense?

Mica was going to be my first answer. But I’m worried if you use mica and sif together I’d you create some anti synergy.
So Devana became my top choice.
I don’t see why you’d want Guin.

Not easy, congrats on some solid yellow heroes.

With this options I would say forget about Leonidas and justice, they are nice but nowhere near the rest. Also vivi, I would do a second prof before her.

I wouldn’t do ranvir if wu is already max. Yes he is a little bit better, but not 6 darts better (at least for me)

Bai and joon are also relative similar so would probably look for little bit more diversity.

Between guin and neith I would rather tend to neith. One only cuts mana and give 3 heroes some heal, that’s on offense semi optimal, where neith also cuts mana, blinds them, damages them and has an element link. So if one of the two I would lean to neith.

Norns is pretty much useless for a mono team, but great for myth Titan. So if you value myth Titans a lot she should be considered, if you don’t and don’t want to change your mono system in the next future forget her.

You are saying you want something for offense mono and talking about family bonus for ninjas, so I guess that’s for defense? Than I wouldn’t do Mica, for defense he is just meh. On the other hand if you want to play those Ninjas together on offense why not. And even for a yellow mono he is nice, because with 5 stones he can be some kind of live safer if the board goes dry.

I would probably do Mica and/or Devana. Norns if you change from mono, or for myth Titan.

I still kinda like Mica. The damage share quickly will help you get Sif and Prof to fire.

I’d you play 3-1-1 you can use Mica with the other ninjas in an attack. I just assumed mono.

Thank you for the detailed opinions!!!

Offense I raid with 3:2 - green/yellow or purple/yellow. Just a habit I guess. War attacks is all 6 flags mono. Don’t know why, but it generally works and I don’t feel too much like tossing my phone against a wall.

The three ninja thing was indeed being considered for defense. I find the fun part of this game, especially this far in, is to change up raid defense every few days. So I rotate though options and see what fun combos I can try out. 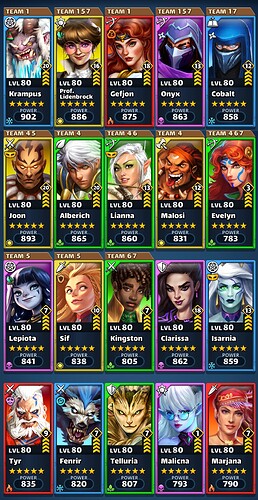 After Mica I’m thinking Devana is the clear choice. Joon is a killing sniper but I think Devana has some extra perks added that will suit your needs well. Stacking that elemental link mana gain with Sifss sounds decadent!

Norns is fully serviceable for mythic titans at 3/70 because she can survive one slash, so certainly don’t need to spend darts on her as she’s a very niche hero without too much utility otherwrise.

As mentioned Bai and Joon are largely similar, so probably a bit more diversity would be good. Mica has anti-synergy with Sif, so definitely something to be considered. Also I can tell you from personal experience the family bonus is negligible on offense, basically it’s nice when it procs, but you can never (and should never) rely on it. So if that was your motivation for maxing Mica then save the darts. (and this is with me running 3 ninjas)

Guin is very much old news and obsolete in 2021, will be even more so going forward. I wouldn’t waste any more feeders and ham on her.

Ranvir is essentially a Wu with more def and HP, but not at all worth the 6 darts as @ferg mentioned.

So by process of elimination, Devana and Neith are the winners. Coincidentally those would’ve been my picks too.

Also I can tell you from personal experience the family bonus is negligible on offense, basically it’s nice when it procs, but you can never (and should never) rely on it. So if that was your motivation for maxing Mica then save the darts. (and this is with me running 3 ninjas)

I’ll heart the comment even though this makes me sad… bummer. But thank you for the insight.

I’ll take Devana to 3-70 as my yellow level project now, then throw some darts.

What about healers If you don’t have healers you can’t fight for longer periods in addition to the counter attackers healers will give good strength and defense to the team. my recommendation is Vivica and Gullinbursti

Gullinbursti looks plenty leveled to me. And Prof is way superior to Viv. I would not max Viv unless you’re doing it for her costume use in other parts of the game.

Guinevere really isn’t much use at all nowadays, mine hasn’t been touched for months. So, unless you are desperate for a yellow tank, she is way down the list.

As for Norns, she’s probably even less useful!

Neith is ‘OK’ but on attack her mana cut isn’t as useful as it is on defence, simply because the cut happens before you fire tiles so enemies will generally still charge mana after the cut.

Of them all, Devana is definitely the best option with Ranvir another possibility if you don’t have Miki

Also I can tell you from personal experience the family bonus is negligible on offense, basically it’s nice when it procs, but you can never (and should never) rely on it. So if that was your motivation for maxing Mica then save the darts. (and this is with me running 3 ninjas)

I’ll heart the comment even though this makes me sad… bummer. But thank you for the insight.

I’ll take Devana to 3-70 as my yellow level project now, then throw some darts.

I have an update for you.

First let me apologize and say it completely slipped my mind to mention I made my previous comment with an important detail left out: I only used two ninjas on offense, so that family bonus chance really was quite negligible.

The past week or so I’ve been experimenting with a rainbow raid team - Gazelle-Garnet-Cobalt-Onyx-Kingston. Now with 3 ninjas in tow, I’m happy to report that while you still shouldn’t rely on the family bonus proc’ing, it does seem to proc a fair bit more consistently now. I want to say I see at least one dodge/counterattack every match, or at the very least every other match.

For the most part these are fairly inconsequential, but I recall two matches where it did make a difference. In one, the dodge saved my Onyx from certain annihilation from Odin firing right after Frigg, and I was able to claw back a victory with him going off at x3 charge and just wiping out the entire defense. In another, my Garnet was one slash away from dying at x2 charge, but she got lucky and dodged a slash, and the subsequent heal gave my team just enough of a boost that I was able to turn it around. (but this is 2 out of literally at least 100+ matches, so a 2% advantage or less if you will lol)

So, if you haven’t yet spent the darts on Devana, and are 100% committed to running 3 ninjas in your offense team, then sure, go ahead and give Mica the darts. But I need to emphasize this part strongly: only give Mica the darts if you 100% plan on running 3 ninjas in offense!! At best you’ll be running a 2-1-1-1 team, and perhaps at that point it would make more sense to go rainbow.

Devana is still an extremely solid FYI, and what I said above does not diminish her innate value in any way. It’s just if you really want to have some fun with rainbow raiding, then yes the family bonus could come in handy.

I am going with Devana