Green hero's: who to ascend? 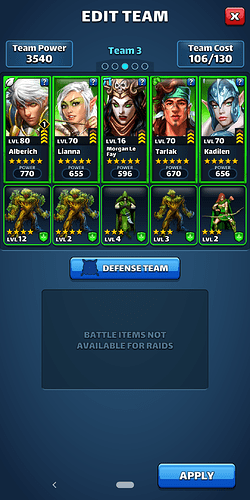 I have sorcerer/monk/barbarian emblems unused. I was thinking tarlac because his attack is highest but Morgan le fay could probably be put on my defense team (currently: Deliah/Victor/Frida/kunchen/Zimkitha)
Let me know your oppinions thanks

I have Athena currently with ranger emblems, lianna just seems to me like she doesn’t do enough. I could be totally wrong though

Lianna vote here. Tarlak’s main use is for titans. His skill may increase the attack power and health of ally heroes, but he doesn’t offer any direct offensive damaging skills ideal for killing enemy heroes from war or raid, or monsters. and their bosses in the world map or during special quests. With the RNG thing in the game, you can’t expect the enemy/ies to be killed by tiles alone. For ranger emblems, retain what’s with Athena and you may improve her emblems further.

She does plenty. You shouldn’t think only about your emblems, because if you do that, you will only max out one of each class of hero, until you have enough emblems to fully max that first one.

Is she better than say, Alberich? Probably not.

Is she really useful? Absolutely.

Not much of a contest even though the other heroes seem nice.

I would pull for kingston

If you get no kingston then max lianna

Try to max tarlak before getting to 12* and higher titans, just makes hits easier when you can bring maxed heroes instead of 3/70s