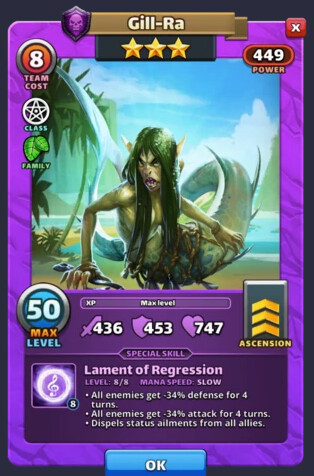 What do you think of Gill-Ra ?

This thread is for thoughts and discussion on Gill-Ra.

Based on preferences Forum members have expressed, please try to stick mainly to Gill-Ra and not wander off topic too much to other heroes.

*NOTE: Summon Results posted without any commentary/feedback at all should be flagged as Off Topic and removed, based on preferences expressed by the Forum community. Please include some comments about what you think of Gill-Ra when posting Summon Results. In addition to opinions about Gill-Ra, you are also encouraged to include how many Summons it took before receiving Gill-Ra (or how many Summons you’ve done without receiving Gill-Ra), so other players are presented with realistic experiences of the rarity of Rare Event Hero.

Is Gill-Ra worth Summoning For?

What do you think of Gill-Ra compared to other 3* Heroes?

How many copies of Gill-Ra is it worth keeping & levelling?

What do you think Gill-Ra’s Primary Purpose is?

Is Gill-Ra worth giving Sorcerer Emblems to?

Where do you think Gill-Ra is best suited on defence (in a 3* arena)?

How do you think Gill-Ra will be best used?

If you would emblem Gill-Ra then which Emblem Path would you select ?

Gill-Ra was Treevil before Treevil existed. She is great to have around for 3* fights and a good sub if you lack Treevil.

If you emblem her her HP is big for a 3*. Before Treevil (or if you don’t have him), nothing came close to her simultaneous A & D drop. A 3* cleanse can be tough to find too.

Definitely worth having, especially without a Treevil.

No, she is sorcerer while the tree is wizard.

You are correct, thanks. I will edit the original post. I was going if memory.

Wow…What a difference these new heroes make, like Treevil. It makes the older heroes look so weak

I suppose, they could be viewed as a stepping stone or a case of “if you do not have xx, this hero is better than nothing”

Most F2P and C2P will get use. The natural progression of S1 to S2 to S3, etc. (although there is a valid point of skip S2 after you unlock S3 because power creep outpaced S2 for the most part). They may never land Treevil given you get coins for only two tries per event. A lot of events take depth too, so if you only managed a single Treevil keeping Gill-Ra is useful. ToL, towers, etc.

I’d love to see potential costume for Gill-Ra to be a healer.
Yes, she’s slow, but slow healers are a thing (Vivica, Kunchen, etc.).
Purple have only one 3* healer, Aderyn, and she’s behind paywall that makes F2P unable to get her - having 3* purple healer on S2 would be nice touch, just make her objectivly worse than Aderyn, so nun will still be kinda wanted.
And don’t tell me it’s impossible, C Ameonna is now healer, while her basic version had nothing to do with it.

I’d see her as 3* version of Kiril - small hp reneration + attack buff + def buff. This will be reference to her basic form (- def and -attack for enemies). 3* should be objectivly worse that 4*, but her mana speed makes this by itself - slow instead of average.

Cool idea, just not sure it’s accurate anymore about 3’s being worse than 4’s since Treevil is on legendary quests and diamond teams. Bertulf makes it to 14* titans. I think that barrier has been broken to come degree as crazy as that sounded when I first started ….

In the other hand, Treevil is an event hero, not seasonial one. Easly accessible heroes are usually weakier, ESPECIALLY from old seasons like 2. Even freshly added costumes for S2 aren’t that OP.

This character reminds me how game has speed up so brutally. Before one of best rush attack characters, now its just another card you might (aka wont) use once in a year.

Yeah, that’s crazy. But unlike Treevil, Gill-Ra was never loved.

My Treevil wasn’t done in time for CF2, so for all non-purple reflect levels on rare Gill-Ra came and crushed it. Mine is simply maxed, no emblems or LB. Even then, she wasn’t a survival concern or anything and her enemy ailments are great!

Treevil IS better, that is unquestionable, but she is a very underrated hero. If you lack Treevil, lost him in a tower, used in war or ToL already, etc. she is great. If you’re not a big spender odds are you have a surplus of sorcerer emblems too.