UPDATE 07/20: Lots of updates
UPDATE 05/03: Adjusted formula and rethought the special and rush scores for all most heroes. Added in some Beta/Upcoming heroes. Removed “Needs Nerf” tag as it doesn’t make sense with this power creep. A bunch of other stuff. (NOTE: I forgot to update Costume Finley information, will get it in the next go round next month).
UPDATE 03/02: Lots of changes
UPDATE 02/08: Added War of Three Kingdoms heroes
UPDATE 02/01: Corrected Congalach’s name and revalued Iris due to change from Beta and thinking about Mythic and Rare titans.
UPDATE: Corrected Ruby’s Special value to reflect the change to the other Ninja/Magi, added Congalaich.

Direct Link to easier to use picture-----> HERO OFFENSIVE RANK

I created this formula to get a mostly unbiased view of all the direct-damage offensive heroes. “Direct-damage” in this case means those heroes who have a special that imparts immediate damage, not delayed damage only. As an example, Costume Kelile does not appear on this list because she can only apply DoT, she does not hit directly.
Obviously, this means a good number of heroes are left off this list, however I am currently developing formulas for “Healers” and “Support” heroes in addition to this one.

This formula includes a number of metrics to derive a value, with the Offense (OFF) and Special Score having more weight than the other metrics. While Titan ability is counted in two separate columns, they are combined and halved to give one number like the Special and Rush metrics.

The bias in the formula comes mostly from how I perceive the Specials of each hero, how I think the special will work in a Rush setting, and how the special will work against a Titan. When deciding a value to give to the Special I looked at the hero’s stats, mana speed, and the parameters of their special together, and then factored in how it all compares to other heroes specials.

When looking at the Damage (DMG) and amount damaged (DMG’d) sections you may note numbers that don’t match the card. In those cases, it is trying to find an average damage or amount damaged to create a better number for the formula. As an example, the DMG for Frigg was the mean of the high and low damage that she can inflict based upon the number of Shields on the board. Frigg can hit for 100% up to 244% based on the Shields, and thus the difference was split and became a value of 172% (1.72).
Regarding the amount damaged (DMG’d), in some cases due to the random element of a special I again split the difference with the amount hit. With Sir Roostley I chose a value of 2.5 heroes damaged, as I felt that would be a fairer assessment than choosing “1” or “5”.

Final Notes:
This isn’t a perfect system due to the myriad of variables in both the way the specials work and the overall nature of the game, as such situational heroes (like a Lepiota or a Hatter for instance) will be undervalued as the formula can not account for the different situations and enemies the hero could encounter.
This also is not necessarily my personal view of any of these heroes’ value, and there are a number of lower valued heroes that I personally like using frequently. So, if you see a hero you really think is the greatest ever but isn’t ranked highly, please recognize that it isn’t personal.

Thank you for your work. It is interesting seeing this instrument. I am thinking though that it might be useful to post the source with the formulae, so other data aficionados can play around with your criteria and also to understand better the formulae you used.

there are a number of lower valued heroes that I personally like using frequently.

Also, I am curious if you can name a few of these

Yoma this is amazing! Glad you are enjoying the game and have the talent to create something like this for the player base.

With Alfrike and Sir Roostley I chose a value of 2.5 heroes damaged, as I felt that would be a fairer assessment than choosing “1” or “5”.

Alfrike would always cast 5 orbs though.

Interesting, though hard to account for things like Mr Pengi who is much stronger with a full minion board than alone

Also, I am curious if you can name a few of these

Yoma this is amazing! Glad you are enjoying the game and have the talent to create something like this for the player base.

Alfrike would always cast 5 orbs though.

Indeed, and I shouldn’t have used her in my example because I accounted for her 5 cubes by claiming 5 in the DMG’d stat.

Interesting, though hard to account for things like Mr Pengi who is much stronger with a full minion board than alone

I had to judge Pengi based on having no other minions in play, and firing in a vacuum if you will. Given that, he is a solid sniper who also creates so-so minions for himself and nearby, not bad but not amazing. Obviously he is a different kind of beast if there are already minions in play…

The Magic Heroes such as Cristobal and Milena seem to be missing. Left out by mistake?

Thanks for pointing that out, I totally forgot the Mages. Will update.

Added Cristobal & Milena, and also modified the Special score for the Mages, Ninja, and Thor to better recognize the value of the multiple stages of their specials, and thus utility of the special.

Hi, @Yomagn-tho. Thanks for the awesome work, but can you explain what some of those columns mean (like special, rush, stack, etc.), and what the numbers assigned to them (like damage/DMG) specify? You should probably change the speed column numbers into # of tiles.

For the Overall, does that specify the total amount of damage dealt or total amount dealt per tile (factoring speed into it)? Thanks.

I’m surprised Alfrike ranked so low. This one lists her up high, but I guess your metric above takes # of tiles into account. 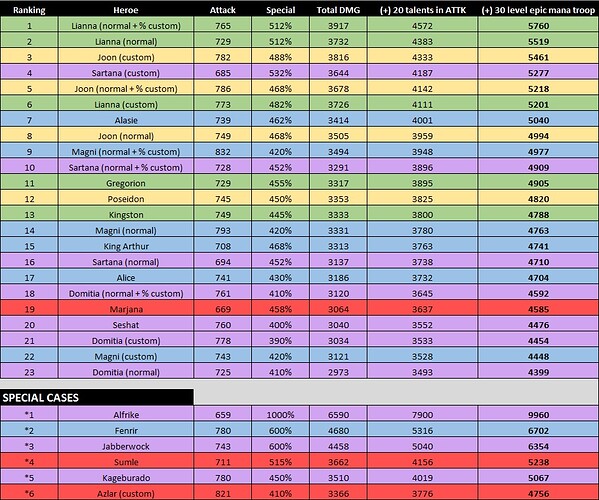 Hi, @Yomagn-tho. Thanks for the awesome work, but can you explain what some of those columns mean (like special, rush, stack, etc.), and what the numbers assigned to them (like damage/DMG) specify? You should probably change the speed column numbers into # of tiles.

Hello Dan, so I will break down the columns for you.

…and finally, OVERALL is the score that calculates OFF score, DEF score, SPECIAL and TITAN scores, and SPEED.

I’m surprised Alfrike ranked so low. This one lists her up high, but I guess your metric above takes # of tiles into account.

The reference posted seems to be a straight damage ranking, and does not take in to account the value of the heroes special or anything beyond the damage to one target.

I updated the form to correct a couple mistakes; Faline’s Attack stat changed to i believe the correct number and C.Yunan was not postioned properly.

I also included the speculative Season 5 heroes for fun, in the picture in the link they are highlighted in grey. 3 of them would make the top 5 if they are released as is, largely due to the added value of the Passive abilities.

Thanks for all the work, but I recommend you change the sort order. Right now, it’s like you’re sorting according to how good the hero is because you included defense as a factor, but not damage over time, etc. it would be much more useful to see how much damage a hero’s special does per tile or per 3 tiles to charge their special. That should be your sort order.

Added a number of new heroes like the recent HotM’s. A number of heroes in the list are speculative and I will revisit them once they release. Right now I am giving the S5 heroes a Special score of 4 because their passives just look to be a bit too much, but will definitely revisit them when S5 roles around.

thanks for keeping this updated… and wow, 4 of the top 6 are unreleased S5 heroes. anyone who says power creep isn’t a thing needs to look at this!

also, Ruby is insane… so much damage AND a mana cut. ugh!

And yet peoples choose to complain about Mr. Pengi

but I know I’ve been complaining about Ruby since she was in Beta, lol

Pengi is great with a proper team to help set him up, but by himself without other minion makers he is definitely no Dark Lord.

Ruby is crazy, totally agree! I have her and use her on my primary raid team which is Ruby-Mist-Ferant-Wolfgang-Zekena (an adaption of a team Ugk26 runs, thanks @Ugk26 for showing me your raid offense!). If I can get to her 3rd charge the battle is an autowin at that point, it is just too brutal of a special for any team to overcome that get’s hit with it. Even Alfrike isn’t as dangerous, I have won battles where she fired her special against me, and even remember a battle where she fired twice and I still ended up winning!

Updated again, prepare your butts for the Nyx and C.Guardian Panther meta!