This thread is to provide early insights and discussion on the October 2022 HOTM, Celidana

All Information from Beta is Subject to Change!

It’s incredibly common that heroes are changed during beta testing, or sometimes even after testing but before release. That is, after all, the purpose of beta testing.

So I wouldn’t get too attached to any of this — it’s not unheard of for entire portions of skills to be removed or reworked, or for radical changes to stats to be made.

Innate Ability: Boost Health on Enemy Special
When an enemy casts their Special Skill, this character has a 50% chance to boost this character’s health by 100.

For a full list of items currently in beta testing, as well as their related threads, please see the master #beta-beat thread:

Whoa, DEADLY VF tank for sure.

Too many Cleric healers.

Another Zulag, beastly on paper but very average in game.

I’m not in love with the idea of her… Kinda reminds me of the lizard guy costume… But better… But nearby… Not a fan.

Basically the 5* version of this hero I just finished yesterday. 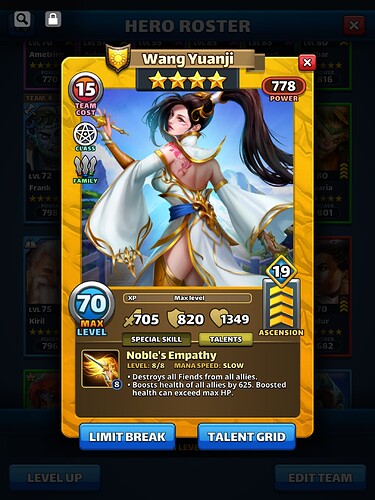 If anyone figures out what to do with these “caster and nearby” healers, let me know, my Sanngrior really wants to know!

With 2 self healing heroes at the wing and two dangerous flanks or heroes that cause more damage when health is boosted will be a goos synergy, definetly more options on 5s than 4s

Klaern has spotted a place

mine is levelled but not emblemmed.

I definitely won’t try to get her.
I find using heal-3 healers difficult. Taking into account that I have Gullinbursti, D’Andre and Vivica I think I don’t need another yellow healer. I think I will try to get Grace in September instead.

Not fun of “heals caster and flanks” heroes. Not fan of 4* Lizard for this reason, nor Blue Evil Fairy. And those are average speed. In VF she may be handy, but does anyone think yellow tank in tourney mode dominated by purple heroes (Alfrike, Ludwig, Lu Bu, Viscaro etc…) is a good idea? Maybe as a flank, but there are better options for that too.

Maybe as a flank,

Two of them as flanks to a purple tank maybe, but

but there are better options for that too.

Reduce the amount of boosted health to 625, but have it for all. Then give the undispellable def buff to all but herself. That would make her serviceable but not overpowered/underpowered.

Not one for me which obviously means multiple copies will be added to my roster, best clear some space this SE

she’s been amazing since her buff to overhealing.

really, it depends on your roster. if i’m going up against a bunch of hit-all heroes (Octros, etc.), i sometimes like bringing riposte.

Milena sometimes takes the flex spot so i have a cleanser and someone who can actually deal direct damage. my riposte heroes on this team are usually Ferant and Boril.

i’m less bothered by caster-and-nearby healers (AS LONG AS THEY’RE NOT SLOW SPEED) because most that i have aren’t cleansers, so i’ll usually add a Rigard to the team by default or something. me personally, i also have Goseck, so it’s actually to my advantage if Goseck takes some damage and doesn’t end up getting healed sometimes.

No thanks what about nov and dec?